He died at his home in ‘The Glen’, Glenties, this morning, aged 84.

Only yesterday evening, he had been in his local pub, The Glen Tavern (Dinny’s), celebrating the announcement that Covid-19 restrictions were being lifted.

Jimmy had arranged with friends to play a seisun there at 6pm this evening.

However, sadly, it wasn’t to be. 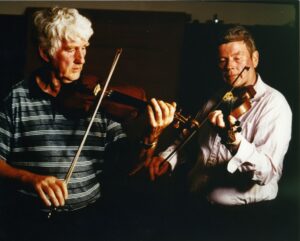 According to the Donegal Fiddle Music website, the late Mr Campbell is widely regarded not only for his fiddle music, but also for his warm wit and company.

“He is also one of the crucial direct links to the life and music of Mickey and John Doherty, both of whom were regular visitors to the Campbell house at An Teanga Mheáin,” his bio on the website states.

“Blessed with a great memory, Jimmy plays various tunes that he heard from among others, Mickey Doherty, Pat McDevitt and his father and uncles in Cruach an Airgead. In 1959, over the course of an extended adventure along the western seaboard, he encountered Margaret Barry and Michael Gorman in Miltown Malbay, Co. Clare and from the latter he picked up a three-part version of the reel ‘The Mountain Road’.”

Jimmy spent three decades as an emigrant in Scotland, where he first worked as a tunnel tiger and later in England where he settled in west London.

He married Yvonne and reared a family of four girls and one boy, Peter, who is himself a very fine fiddle player.

“Jimmy has great memories of music sessions in England with Brendan McGlinchey, the Dwyers of Ardgroom but in particular with Paddy Conroy, the Galway accordion player. Encouraged by Finbar Dwyer to return to Ireland, Jimmy and Yvonne came back to live in the ‘wee Glen’ in 1988. Since his return, he has introduced the music and folklore of the Croaghs and surrounding area to the younger generation of players through bus trips in the company of his late brother, Vincent. Jimmy, Vincent and Peter have been a mainstay in the monthly Saturday night session held in The Glen Tavern since 1988.”