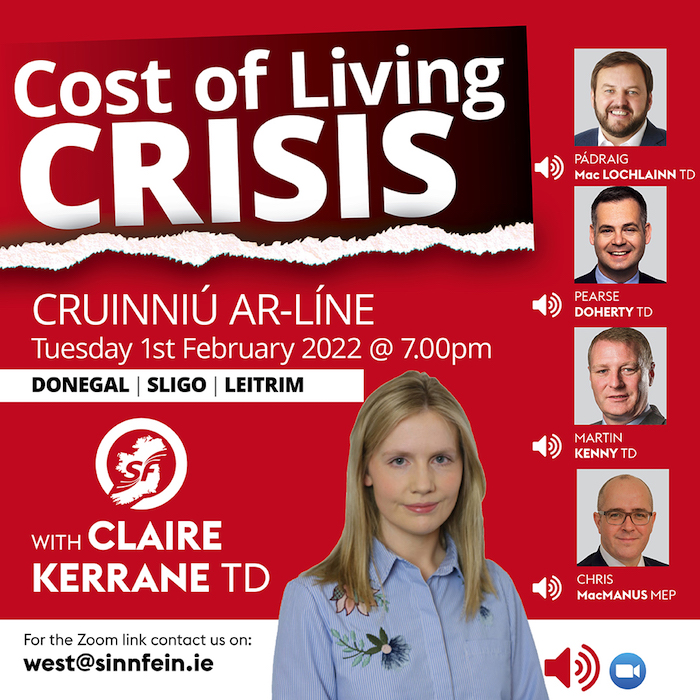 Sinn Féin TDs will host an online meeting next Tuesday 1st February @ 7.00pm on the Cost of Living Crisis in the north west region.

Local TDs Pearse Doherty and Padraig Mac Lochlainn will be part of the discussion.

Speaking in advance of the meeting, which will take place online via Zoom, Deputy Doherty said “The cost of living crisis in this state is having a real impact on the quality of life for workers and families across the west.

“Rents have risen on average by 8.3% in the past 12 months while CSO figures show that since October 2020 house prices have increased by 13.5% across the state, with the median new build house price for first time buyers now at €343,000.

“We also know that inflation is rising at record levels and the CSO’s Consumer Price Index late last year has shown that energy prices are up by 25%, while the cost of home heating oil has soared by a staggering 71%.”

“These realities were reflected in the Cost of Living survey results published by(my colleague Claire Kerrane TD in November. Over 14,500 people responded to the survey with the majority of those working full time (55%) and struggling to cover basic essentials. Many households have also seen their income drop due to Covid-19 while outgoings remained the same.

“We want workers and families across Donegal, Sligo and Leitrim to join this online meeting and share their experiences with us as well as to hear Sinn Féin’s proposals for dealing with the cost of living crisis in this state.”

The party’s Dáil spokesperson on Social Protection, Community and Rural Development and the Islands, Claire Kerrane TD, will address the meeting and discuss the findings of her cost of living survey carried out before Christmas.

To request a Zoom link to the meeting taking place Tuesday 1st February at 7.00pm, just send an e-mail to: west@sinnfein.ie