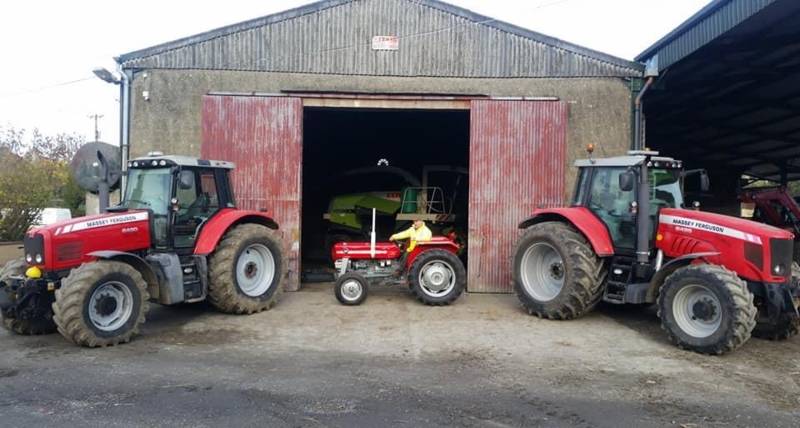 Motoring columnist Brian McDaid reflects on Seamus Boyle’s tractor run at the weekend, along with memories of him and his father.

It may be the smallest tractor in Seamus Boyle’s fleet, but JIH 651 has the biggest heart. 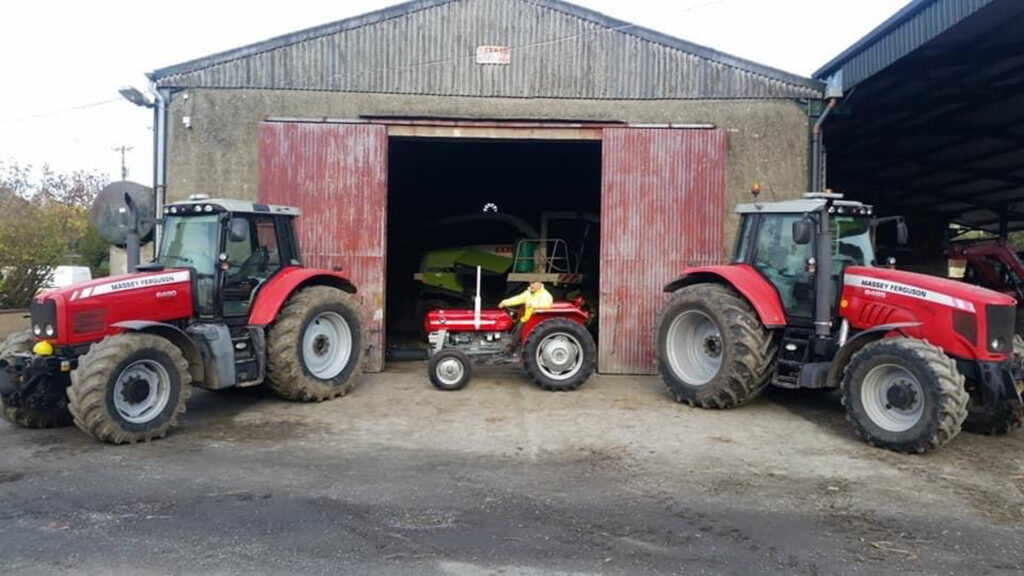 I was heading out the door on Monday evening to do an interview when a friend request popped up on my phone. “Jeez” I said, “Is Seamus Boyle on Facebook now?” My son over heard me and said: “How do you know Seamus Boyle because I know him too.”

It turns out my son was right, this was a grandson of the Seamus that I was going to meet that night. Seamus Boyle, that my son knew, were in the same year in St. Eunan’s College nearly a decade ago.

Neil T. Blaney would have bother matching the support that Seamus Boyle’s tractor run attracted on Sunday morning, and that’s only a slight exaggeration!

Over 300 tractors landed and signed on inside the door of the old purdie shed. On the Monday after, Manny, Seamus’ son’s  phone never cooled, it was nearly as hot as the brakes on the old Massey that led the run down the hill onto Manorcunnigham’s Main Street on Sunday. 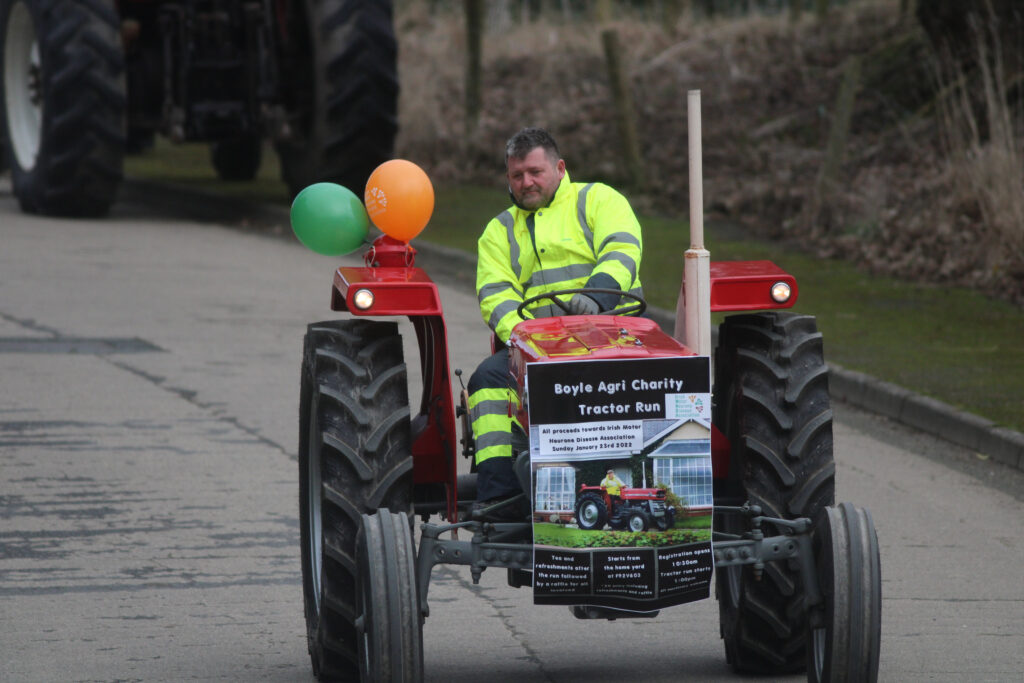 Replying to a stack of texts and messages on how well the day went, Manny was quick to point out that it wasn’t only him but it was a massive team effort, we all were involved. The tractor that led the Boyle Agri Tractor Run on Sunday,  proceeds of which go to the Irish Motor Neurone Association, a disease that Seamus Boyle was diagnosed with last June, was a restored family tractor bought new from McMahon Bros in 1968. Mervin Curry was the salesman who sold it to Manus Boyle, Seamus’ father. That was Manus’ second 135, the first one was bought in1964 when the then new 100 series replaced the old 35’s. 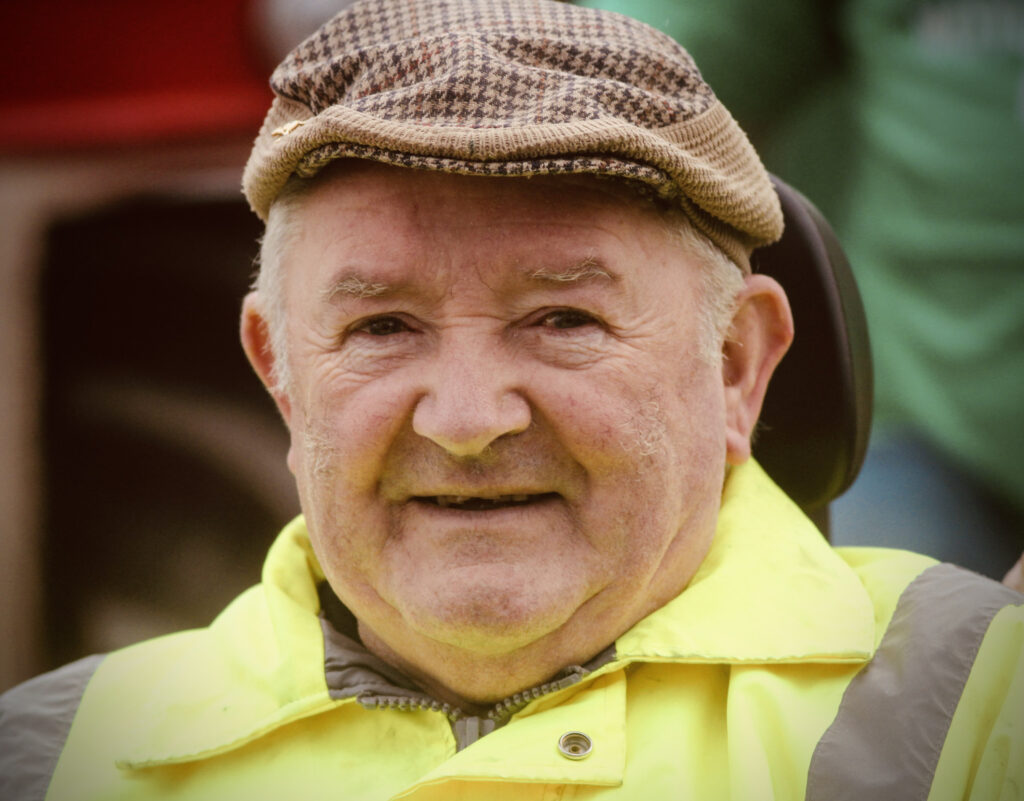 Seamus Boyle out to welcome all who attended the tractor run on Sunday at his farm. Photo Brian McDaid.

Seamus takes up the story

“Tonisha, my granddaughter, was chatting away about doing up our old tractor for a while, wanting to get her done up for the 50th anniversary.

That was when the tractor arrived on the farm in the spring of 1968,” Seamus explained.

As we sit at the kitchen table in Errity overlooking Manorcunningham on Monday evening where generations of the Boyle family drift in and out of the kitchen, the grandchildren have a beautiful way of saying Granda sounding more like ‘Grinda’.

We put that old tractor up into the corner of the shed a long time ago with a mind to bring it back to its original shape. We look at a picture on the kitchen table of the tractor with his grandson Seamus sitting at the wheel, the very same Seamus that sent me a Facebook request 20 minutes ago. He was only a wane then and Seamus, keeping an eye on the proceeding in the background shows that 14 or 15 years had passed. 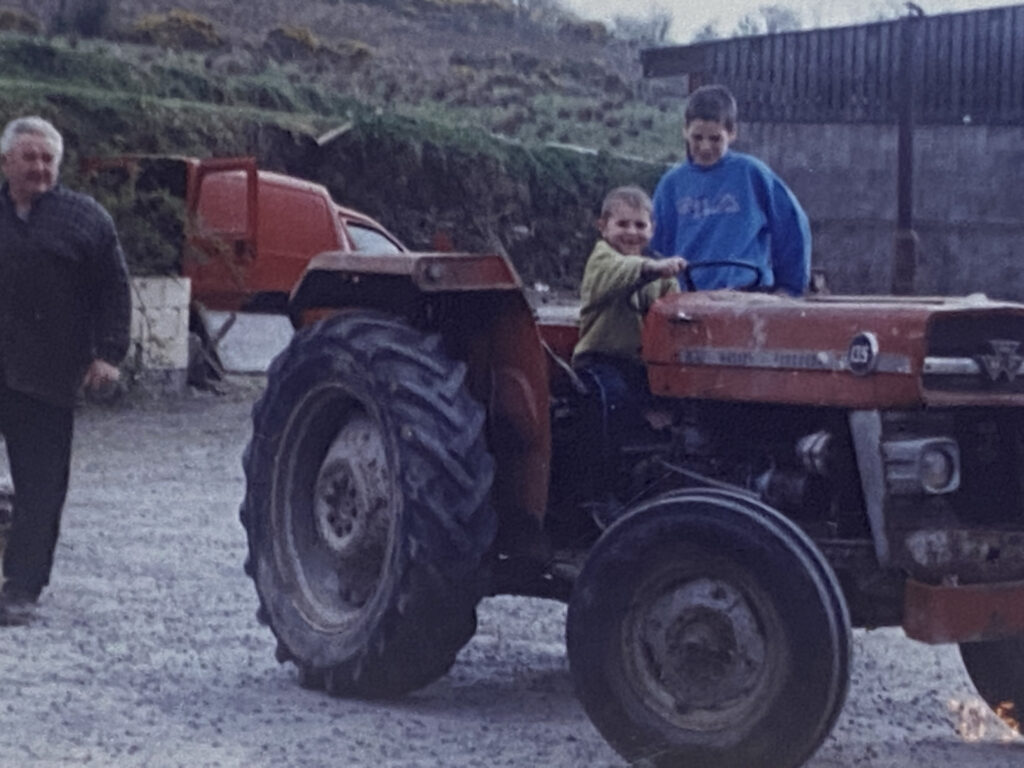 Grandson Seamus Boyle at the wheel with Seamus in the background on one of the very runs round the yard on JIH 651 before it was parked up.

Me and Tonisha dragged the old tractor out to the middle of the floor, threw a set of jump leads on it and to our amazement, that old three cylinder 2.5 Perkins fired up for the first time. That was in January 2018 and the search started for original parts for the 135 that were beyond repair. 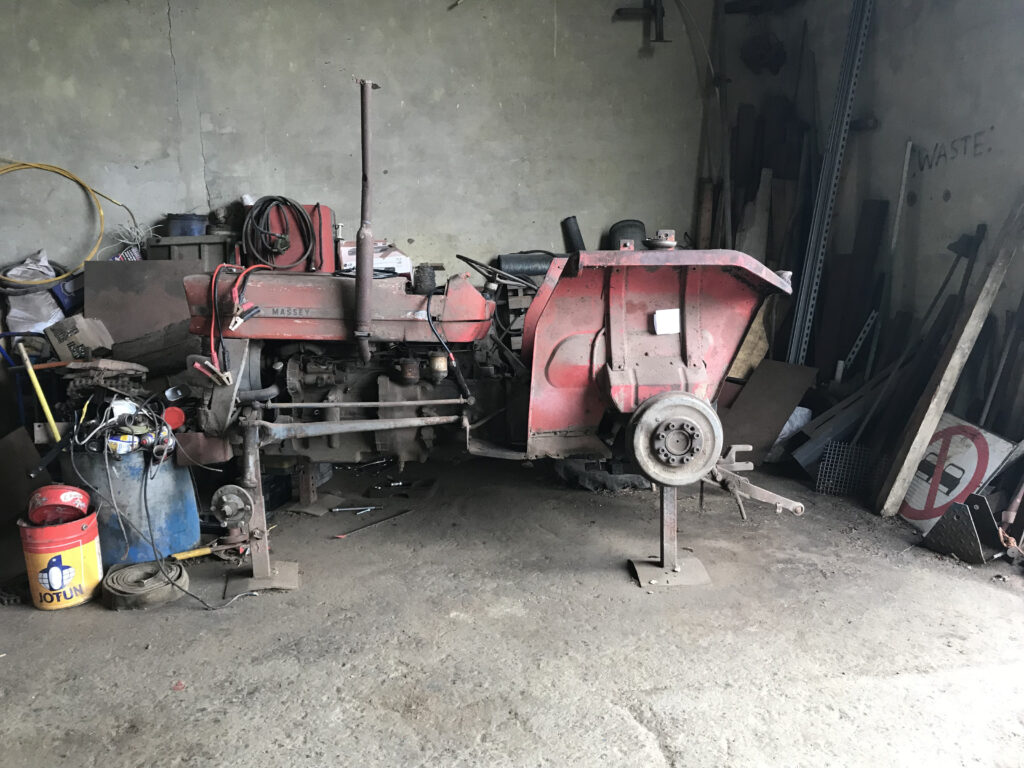 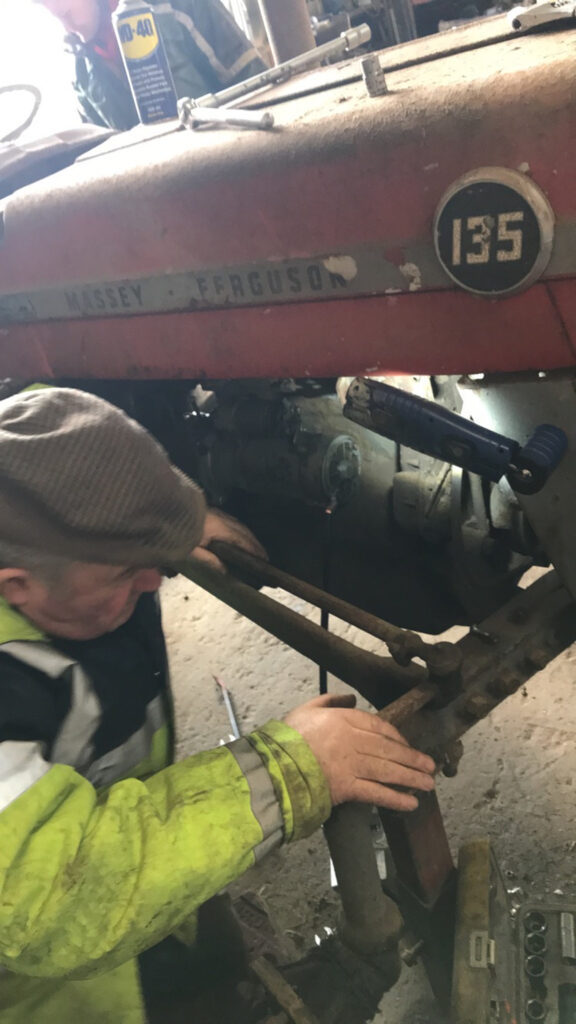 Seamus Boyle in under the bonnet working on getting his old Massey back on the road.

The old bonnet was straightened out and a new grill was sourced, the old original headlights which were made of heavier material were cleaned and set back into place before young Gibson sprayed the grey and red colours of the Massey Ferguson.

Seamus remembers this Massey landing new to the farm in ‘68 it would’ve had a cab in it with an opened back. It was the workhorse it would have worked all day on a tank of diesel. It would have been one of the main tractors used on long autumn days with a potato spinner digger as teams of tattie hoakers gathered potatoes in the decades that the Boyle’s specialised in that type of farming. 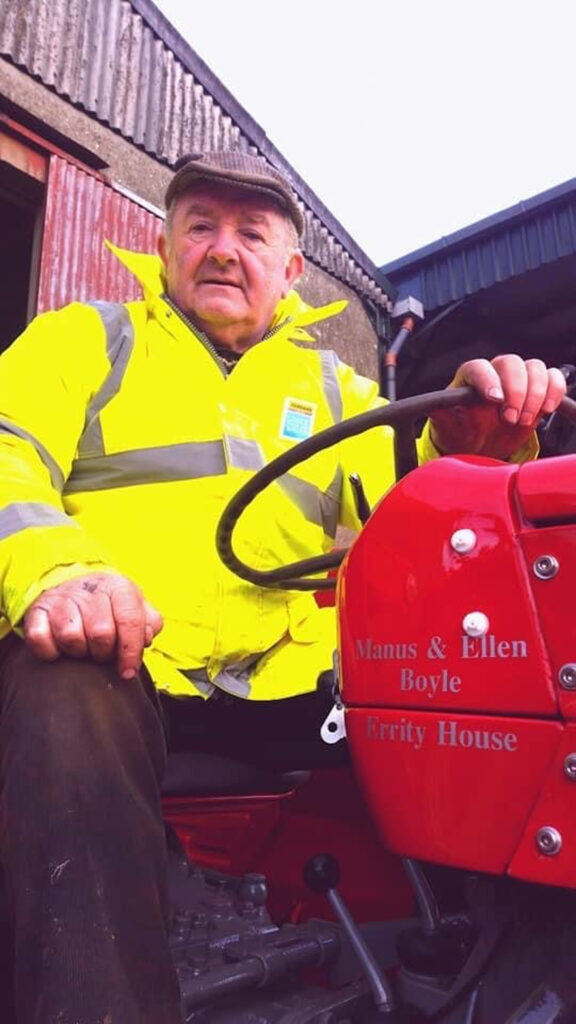 Seamus at the wheel of his father’s Massey at the door of the purdie shed after the tractor was done up in in 2018.

This Massey was six or seven years old when it was part of the fleet of Massey Ferguson’s that landed to plant potatoes in Willie Crawford’s fields at the back of our council estate Wolfe Tone Place. It was the first time that we ever saw potatoes or any crop planted in these fields and it also was the last crop ever to be planted  on this edge of Letterkenny before Crawford’s fields became a new private housing development called Glencar Park.

1976 was the year that I went from Primary School to St Eunans College. All proud of my new college blazer and uniform standing out watching Boyle’s tractors getting the land ready for a crop of potatoes. A man landed over to have a yarn with me over the ditch.

“You’re in St Eunan’s” he said,  looking at the uniform.

“Was a scholar there myself many years ago.”

That man was Manus Boyle, Seamus’ father. My father Fred, was a Manor man (well near enough, Pluck ) so Manus, also from Manor, knew us well. He went to school with my father and uncles and aunts. But Manus also told me that when he went to St. Eunan’s College my uncle Charlie Coyle, my mothers brother was who he sat beside as a scholar and as a boarder at St.Eunan’s all of 6 miles from his home in Manor.

Manus worked hard all his farming life, but in 1976 he was starting to take things a little easier. When the spuds were ready for digging we took a few days off college to help gather the spuds that year.  From my memory of that day I suggested to Seamus that his father wasn’t a great tractor driver. Seamus just smiled and replied “He tried his best”.

You have to remember my father was a plough man; he worked the land with a team of horses before horsepower became mechanical. I ask for a photo of Manus and Seamus sends Tonisha up to the sitting room to bring down a few old wedding photos, the wedding photo of Manus and his wife Ellen is a lot younger than I remember Manus but the eyes are the same. 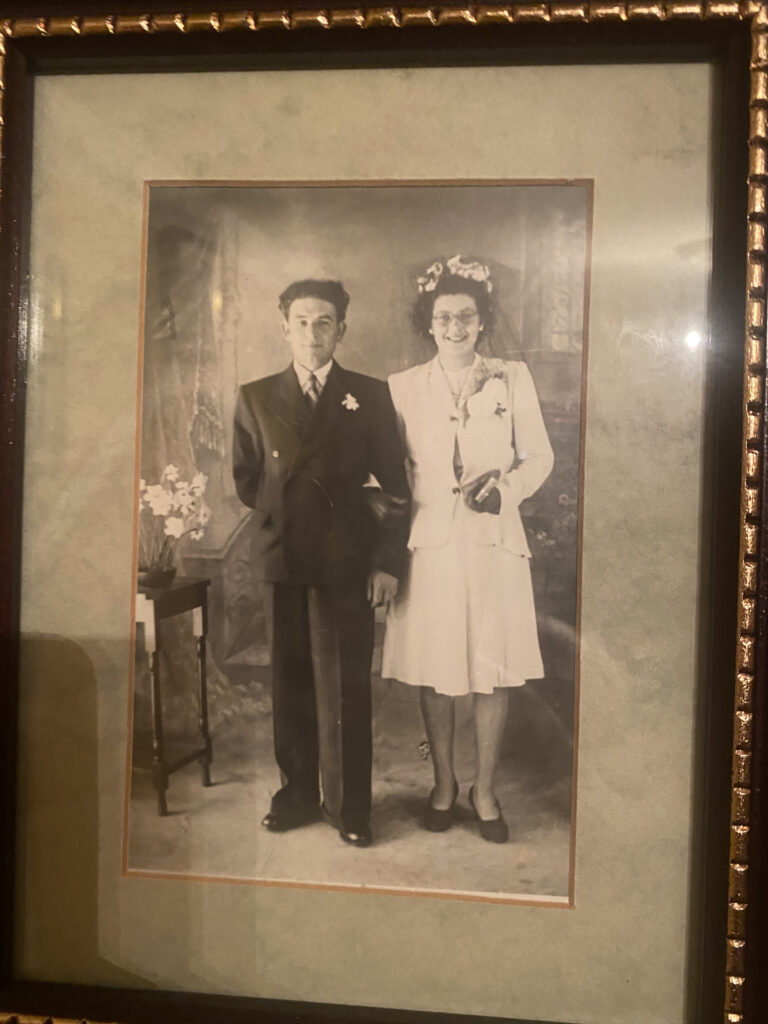 Manus and Ellen Boyle pictured on their wedding day. Which is pride of place in Seamus home.

I know from looking at the photo of the happy couple that their wedding photo was taken at the market square in Letterkenny in an old photographic studio by a photographer called Horabin. I know this because I have a photo of my mother taken in the same studio when she was a young girl with the exact same back drop right down to the exact side table used as a prop in both pictures.

Next to family farming and Massey Ferguson’s, Seamus is passionate about politics, even though his mother Ellen would have been from a Fine Gael persuasion, his father’s family who were originally from Fanad were big Fianna Fail supporters and related to the Blaney family who were big into Independent Fianna Fáil over the years and now back to where they started back with Fianna Fáil, Seamus recalls his late wife Ethna who was Patton from Magheraboy were also big Blaney people. 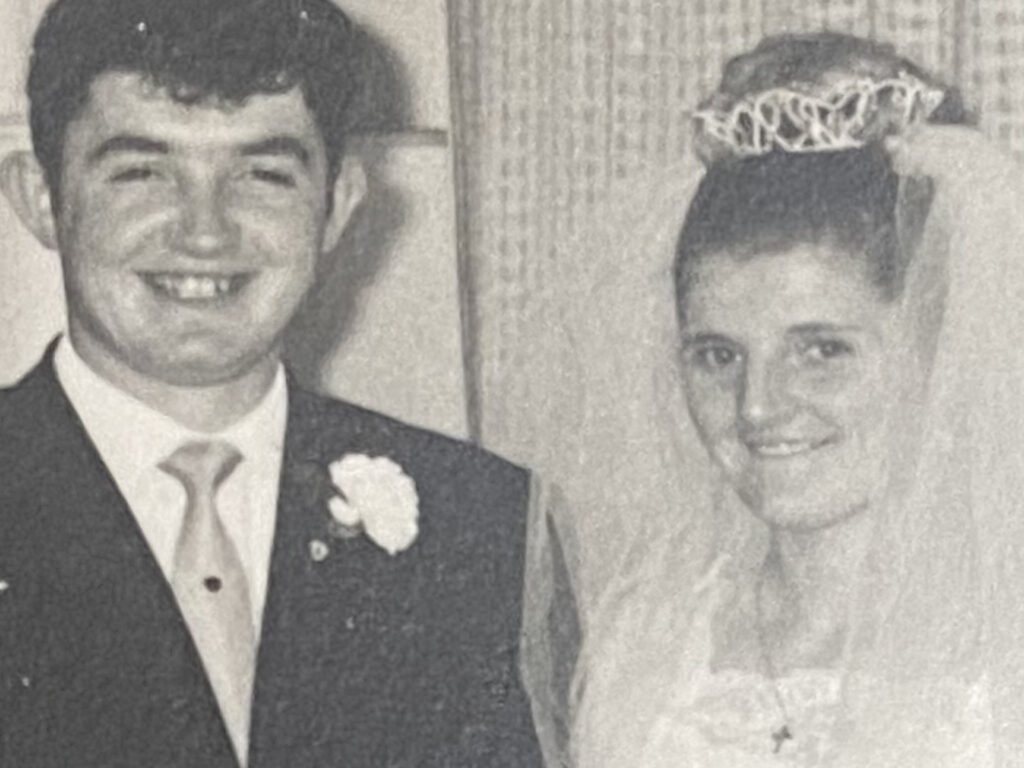 I pull an old photo of the late Neil T Blaney on my phone then Seamus gets a look at Neil T. and the two fists up ready for another election battle, something Seamus and his wife Ethna always got to canvas for. 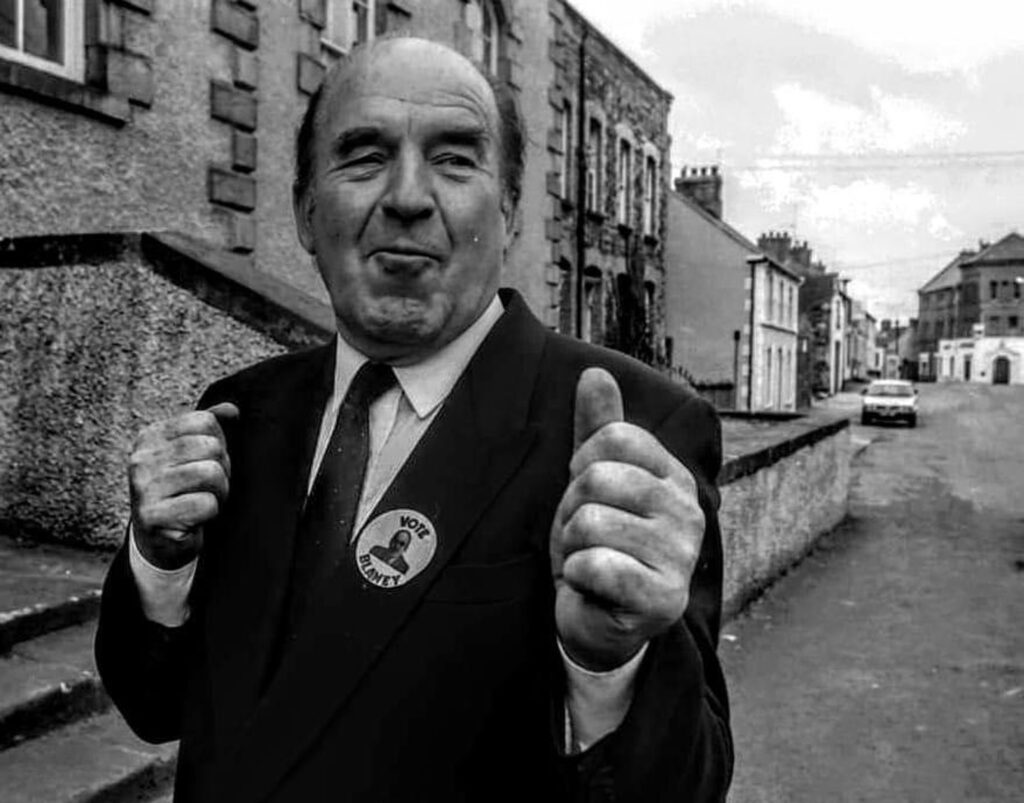 Neil T. Blaney ready for another election battle, related to the Boyle family in Manor who were part of his support team. Photo Brian McDaid

So it’s not surprising that a few of the old crew from the election days were there on Sunday. Cllr. Liam Blaney and Cllr. Donal Coyle were up to support the tractor run. Even the minister for agriculture Charlie McConalogue TD called to the kitchen to support a loyal supporter Seamus Boyle. 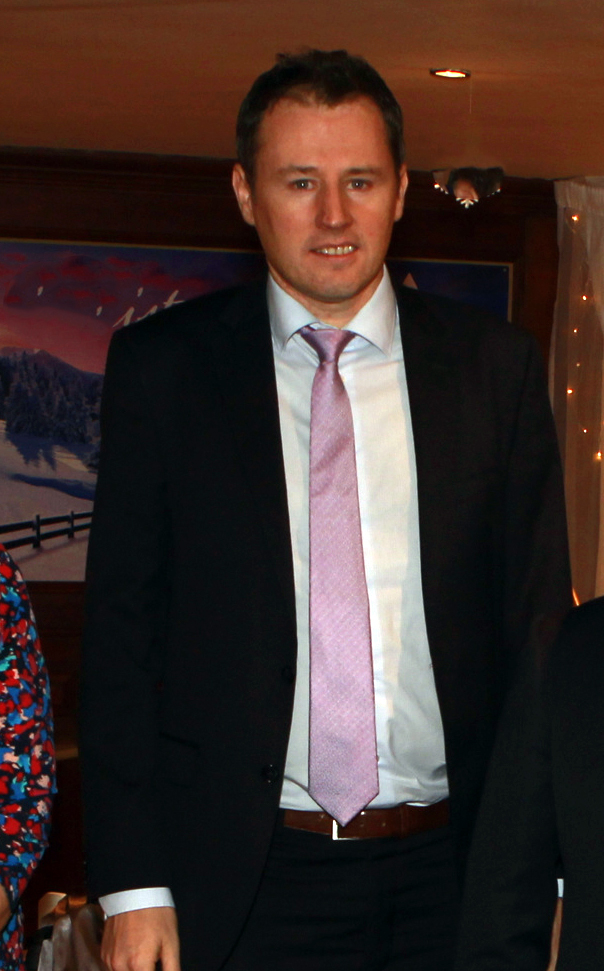 Seamus really enjoyed getting out on Sunday afternoon, and to mingle with the massive crowds that arrived on Sunday for the run.

Seamus met up with friends of his late brother, John, who came out from Tyrone to say hello and support the run.  On New Years eve at quarter past seven I got a message from Manny Boyle to see if I would come out to take a few photos of a tractor run he was organising.

On Sunday morning I was there to see one of the biggest gatherings of local farm machinery head up Errity Bray to sign on for the run.

Seamus Boyle was out having a yarn with this one and that, telling me to get a picture of the boys and that one,  we both caught the whiff of a passing TVO at the same time, a smell Seamus said you never forget. Seamus’ son Manny led a 300 plus tractor run out of Errity on Sunday with JIH 651 around the roads and looking into the fields that the Boyle family business, now called Boyle Agri, worked on for 4 generations.

As we parted on Monday night, Seamus was asking me about an O’Donnell connection in my family and I was trying my best to describe where I thought the old wall steads of my great granny Hannah O’Donnell once stood, up behind the village of Pluck.

There never was a road into the house but Seamus knew exactly where I was chatting about. ‘That’s two fields in fay the road’, that house is down the corner of the field. It’s all grown over now, we cut in there a few years ago, ‘ Seamus said.