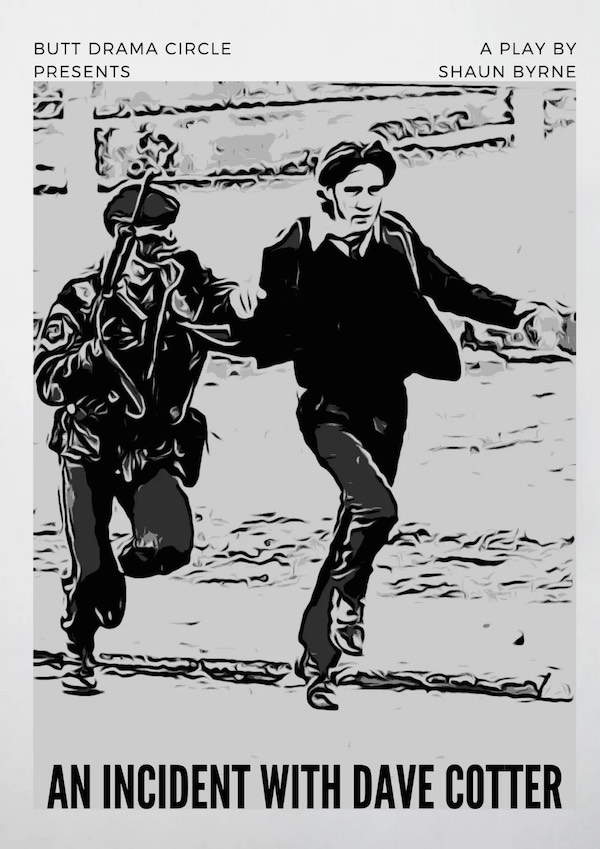 A hard-hitting new play about Bloody Sunday will premier in Ballybofey next week.

An Incident with Dave Cotter was written and directed by local actor, Shaun Byrne, a long-time member of the award-winning Butt Drama Circle.

It is set against the background of the events of Bloody Sunday when, 20 years later, a soldier is confronted by one of the relatives about their actions that fateful day.

Both characters seek to defend, attack and justify their positions in a hard-hitting drama that explores the impact of the shootings on their lives.

The first half of the play takes place on a building site in London in the 1990s where new Irish labourer, Fiachra, arouses the suspicions of Dave. In the second half, the action shifts closer to home in Northern Ireland where Dave has to defend his actions in court.

The play is set to premier in the intimate Balor Theatre, Ballybofey on Wednesday, February 23rd, and Thursday 24th.

It will play there for two nights, before nine other performances across Ireland as part of the All Ireland Drama Festival.

Playwright, actor and director, Shaun Byrne, said he is pleased that the show is getting this opportunity to reach a wider audience.

“Obviously with Covid, theatres were almost dark for most of the last year so it’s good that we can get back to face to face drama,” he said.

“I think the play deserves to be seen in a live setting as it is a very emotional and raw subject matter, especially here in the North West. What happened that day was an absolute tragedy. I suppose the play tries to explore the impact on these two people, their lives, and families.

“The 50th anniversary has brought Bloody Sunday back into the spotlight with a lot of focus on the call for justice for the 14 victims. Part of this play is imaging one scenario where that takes place.”

Byrne, who plays Dave, is joined on stage by fellow Ballybofey man, Christopher Quinn (Fiachra), who spoke about the challenges the play presented.

“The two acts take place 30 years apart so there’s the whole idea of playing someone in their 20s in the first act who then appears in their 50s in the second one,” explains Quinn.

“That in itself presents its own challenges as well as opportunities, how you walk, talk and move changes as you get older. My character, Fiachra, goes from wide eyed nerdy student to polished professional so my performance has to reflect that. Plus, I get to fight on stage which I’ve never done before and get to hit my director. It’s a win-win.”

The cast are in the middle of production before putting the finishing touches to the show. Byrne added there are some great productions out there covering this area of recent history – First Para and White Handkerchief which are both playing in Derry.

“But, this show gives Donegal audiences a chance to see behind the headlines and explore the effects of that day on people’s personal lives.”