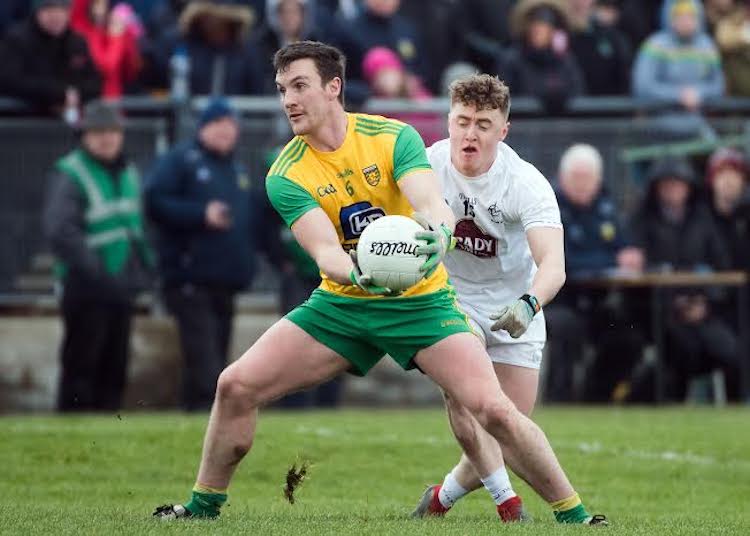 Donegal lead by 6 points against Kildare at half-time

Donegal lead 2-7 to 1-4 at half-time in Ballybofey against Kildare.

Late first half goals from Paddy McBrearty and and Ryan McHugh gave the home side a comfortable lead but Michael Murphy came off injured for Donegal.

Conor O’Donnell got the first point of the game but Jimmy Hyland scored from a mark in Kildare’s first advance up the pitch.

Jason McGee scored after being played in by Paddy McBrearty but Hyland once again levelled the scoring.

Two points from play gave Donegal a lead as McBrearty and Michael Langan got a point each while Caolan Ward made a great tackle to stop Daniel Flynn.

Padraic Tuohy scored a free for Kildare as the Lilywhites were finding space in the Donegal defence.

McBrearty again turned provider for O’Donnell to make it 0-5 to 0-3.

Shaun Patton made a great save from a Kildare man flick from a Paul Cribbin ball into a dangerous area but minutes later a long shot dropped short and Hyland punched the ball into the net to give the Leinster side the lead.

Langan scored after pinpoint strike that went straight over the black spot to level the game and McBrearty scored a goal to give the hosts a three point lead.

Paddy Woodgate scored the second free of the game

Ryan McHugh made amends for a couple wides with a point and made it even better moments later as he scored a goal just before half-time to make it 2-7 to 1-4.