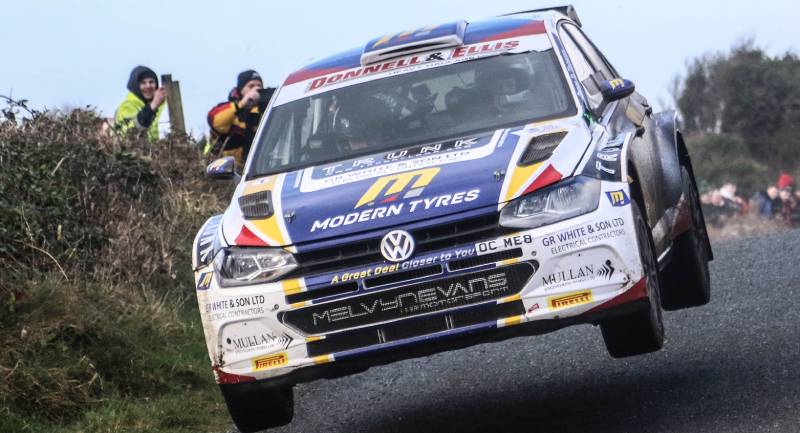 DD Motoring: Rallying is back with the Galway International

If my camera could have spoken it would have told me to go home, such was the rain in Galway for the opening rally at the weekend.

Years ago in the old film days the needle in the light meter would be resting at the bottom in the darkness that is wet winter days in the West of Ireland.

Over the weekend it was the electronics that was suffering between batteries going flat in the cold and condensation getting into the camera. But more about that later..

Donegal’s highest place finisher was Donegal Town’s David Kelly in his Fiesta R5 who finished the Galway International Rally in 7th overall but it wasn’t plain sailing. Talking to Kelly on Sunday morning he told us his car was also suffering from an electric problem that was coming and going on the very wet Saturday stages.

On Sunday morning David was looking forward to getting onto the more open stages and moved up the leaderboard which he did to finish 7th overall behind the previous winner of the Galway International Rally Alastair (Ali) Fisher in his Polo. 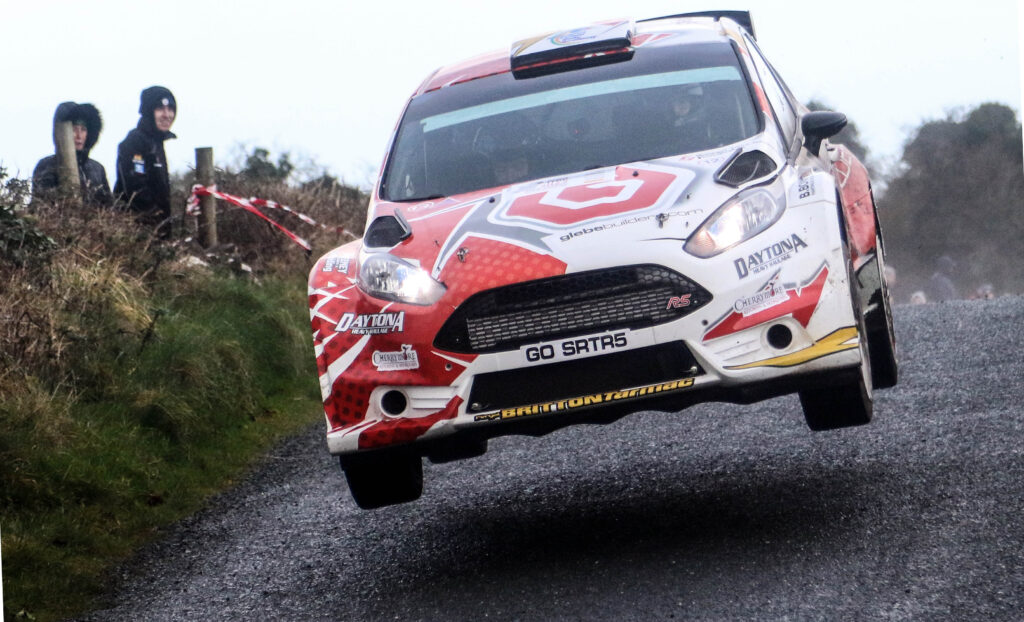 Highest of Donegal finishers David Kelly and Dean O’Sullivan in their R5 Ford Fiesta who were 7th overall in a very wet and wintery Galway International Rally. Photo David McDaid.

It was Monaghan man Moffett running on Michelin Tyres, Josh, who was the first home on Sunday evening at the end of a gruelling two days of rallying in his Hyundai I-20.

Welshman Meirion Evans came closest to spoiling the party in his Polo started fastest on the opening stage on Saturday morning. Ulster’s Calum Devine and Ali Fisher weren’t far off the pace either.

But the biggest talking point was about the times that Donegal’s Kevin Eves was recording in the ‘modified class’ in his Toyota Corolla, a full 10 seconds faster than anyone in the modified and also matching a lot of the four wheel drive R5’s.

That first stage was to be the last stage for Declan Gallagher in his starlet when the grass up the centre of the road seemed to catch out the Donegal man which just added to Gallagher’s back luck in Galway in recent years.

Kevin Eves was soon to also retire in a very casual slide off but a concrete post in the undergrowth did rear transmission damage, putting the Pettigo man out of the rally.

Donagh Kelly landed at the midpoint of the first loop of stages minus one of the front wings on his Polo and Declan Boyle was suffering with transmission problems in his WRC Fiesta. 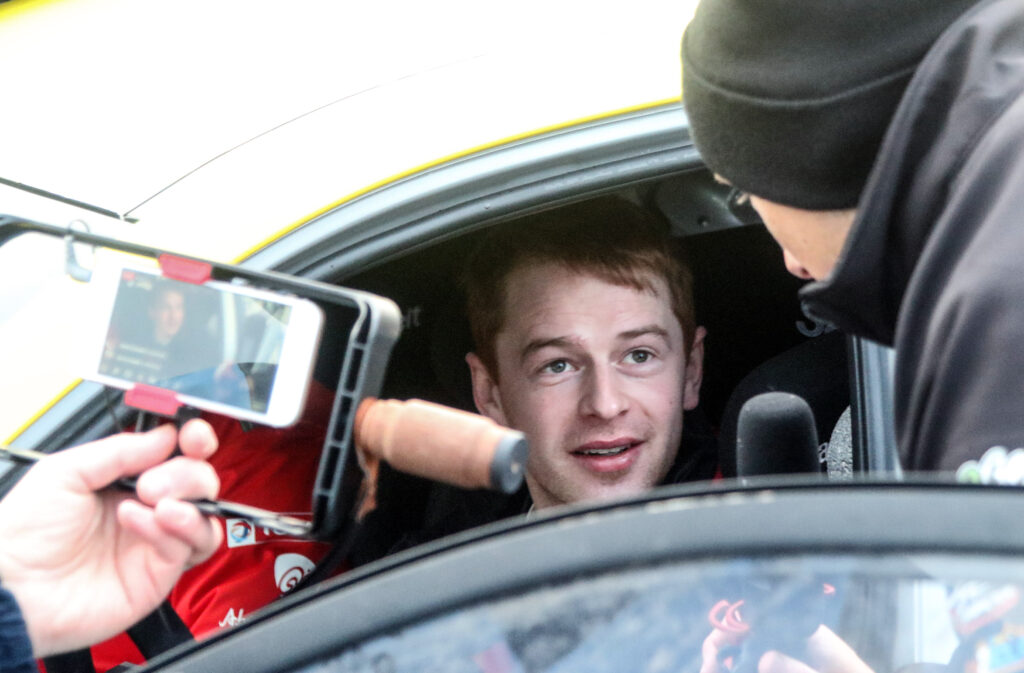 Sunday was a lot better weather for both competitors and spectators, with stages including the Black Road near Loughrea.

Fisher was the first to hit the ditch at a 90 right, locking his Polo up and throwing it sideways before he hit the banking. He wasn’t the first to hit ‘Murray’s ditch’ that afternoon, leader in the modified Daniel McKenna was caught out on the same junction but hit the bank a lot harder putting himself out of the event.

Both Daniel and his navigator Andy Keenan stepped out of their Escort shaken but ok. Both Fisher and McKenna hit the exact same spot in the ditch.

A small ‘yump’ was pushing the cars off the line slightly, leaving them to do the braking on a loose surface at the front of a house leaving both drivers arriving far too fast at the junction. 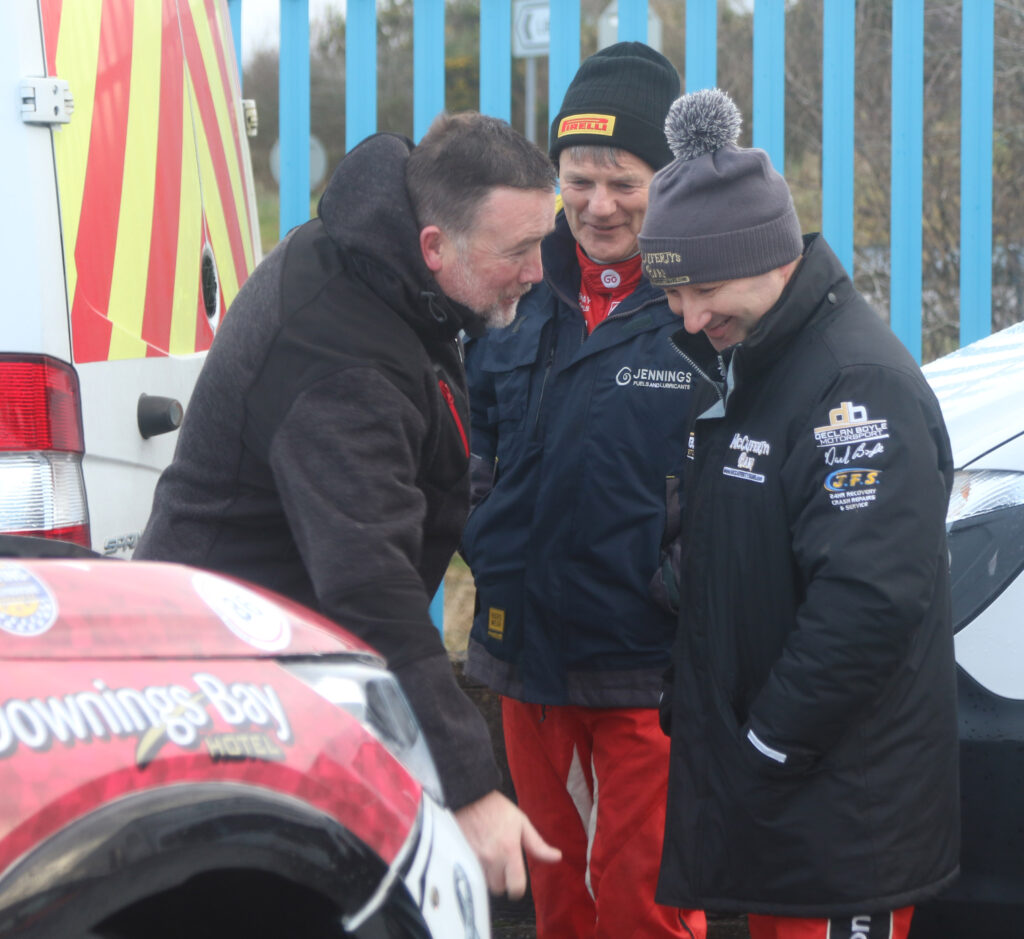 Kieran Kelly, Rory Kennedy and Declan Boyle hace a yarn at the service in Loughrea at the Galway Rally.

My camera was still on the blink, suffering from the Galway weather of the day before, and failing to capture the top cars at the junction, I decided to video the corner on my phone from just in behind the stone wall.

The first car I recorded was Daniel McKenna who hit the banking where Fisher had hit the last time round. The impact took the front wheel partly off as the crew fired up their Escort before they realised the car wouldn’t move.

I only thought my footage of the McKenna off was good until I saw my son David’s image of the impact standing up from the junction a bit where he managed to capture the car as it flew through the air after it bounced back off the stone banking.

Of all the years taking photos at rallies, I don’t think I ever captured a photo like this, to say I’m proud would be an understatement. Well done David. (check the small clip of the crash from both angles through the phone and the photo capturing the impact) 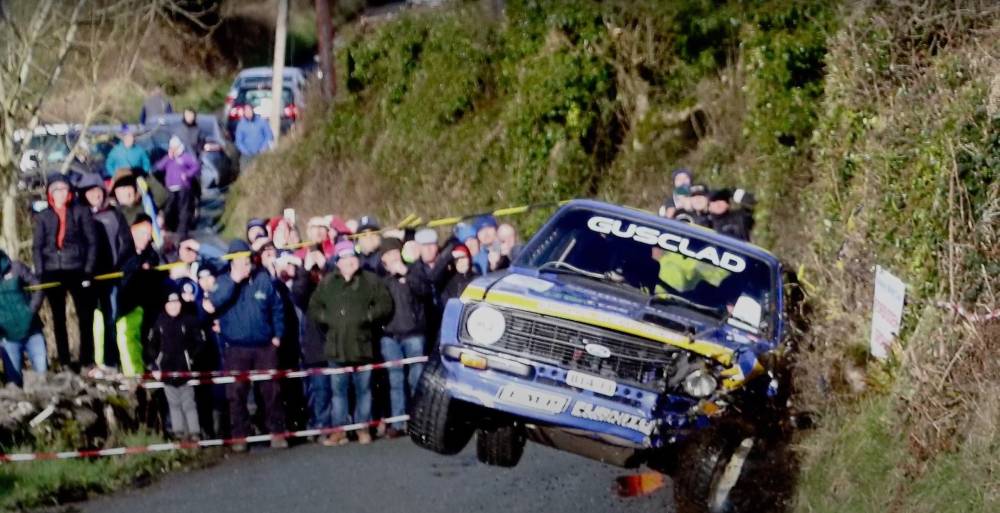 One Donegal Driver was doing the event for the very first time.  Letterkenny’s Justin McCauley. We talked to him on Sunday morning in a line of Mk 2 Escort in for service in Loughrea. Justin was on his first ever public road rally in class 13.

He told us it was a big learning experience and had a few problems with a gear linkage and had a ‘small off’ losing a few minutes. He was looking at getting his first rally under his belt and was enjoying the experience. 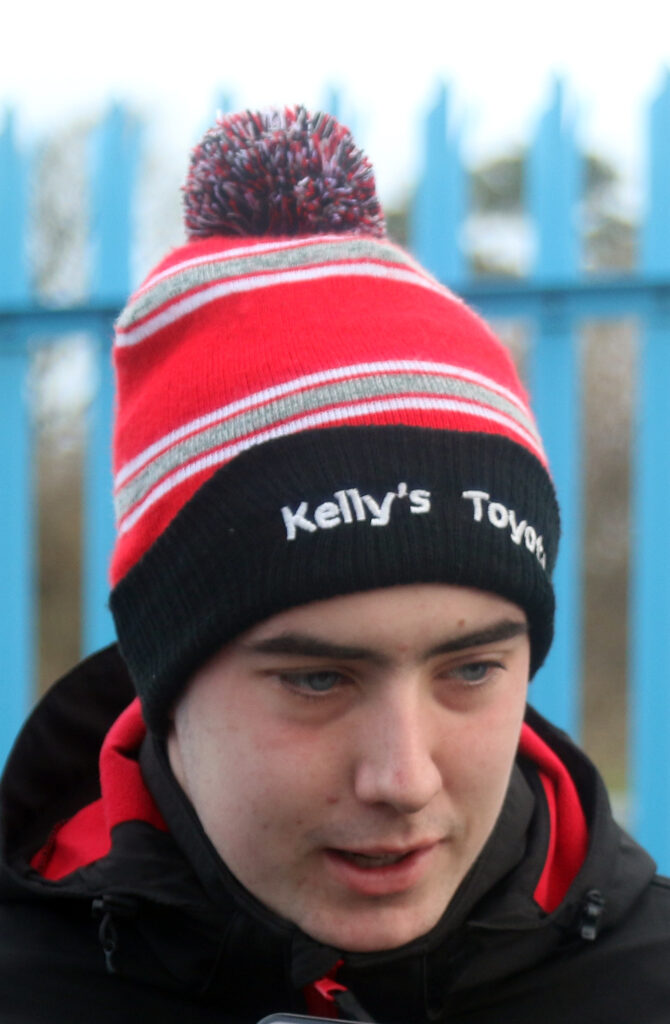 Joe Kelly from Frosses who was battleing it out in the R2 class at the Galway Rally. 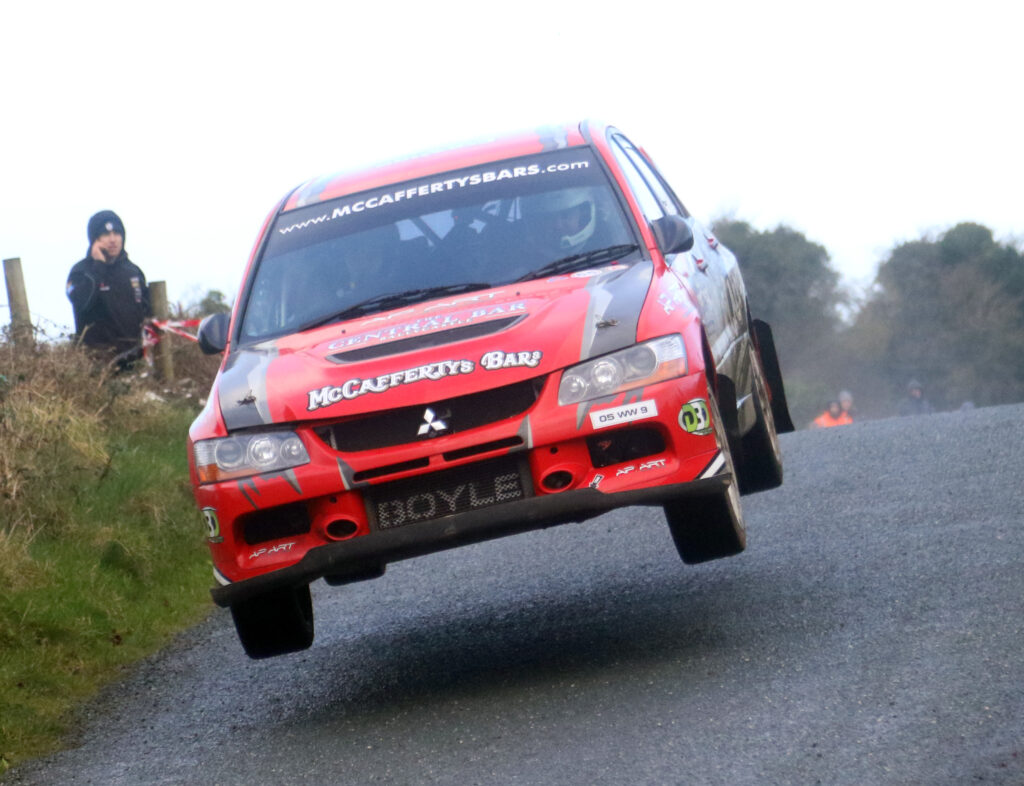 Donegal’s Michael Boyle and Dermott McCafferty in this Evo in the Galway Rally at the weekend.

Galway was a massive test for any crew taking part, not to mention spectators, especially in the wet conditions on Saturday. Some didn’t make it to the end but it’s a great learning process of the many mixes that a winter rally can throw up.

I couldn’t help but notice in the service the Michelin Team in big numbers on the ground, perhaps learning from the changing extreme slippery condition of a typical Galway Rally, information that might help in the development of future tyre compounds. 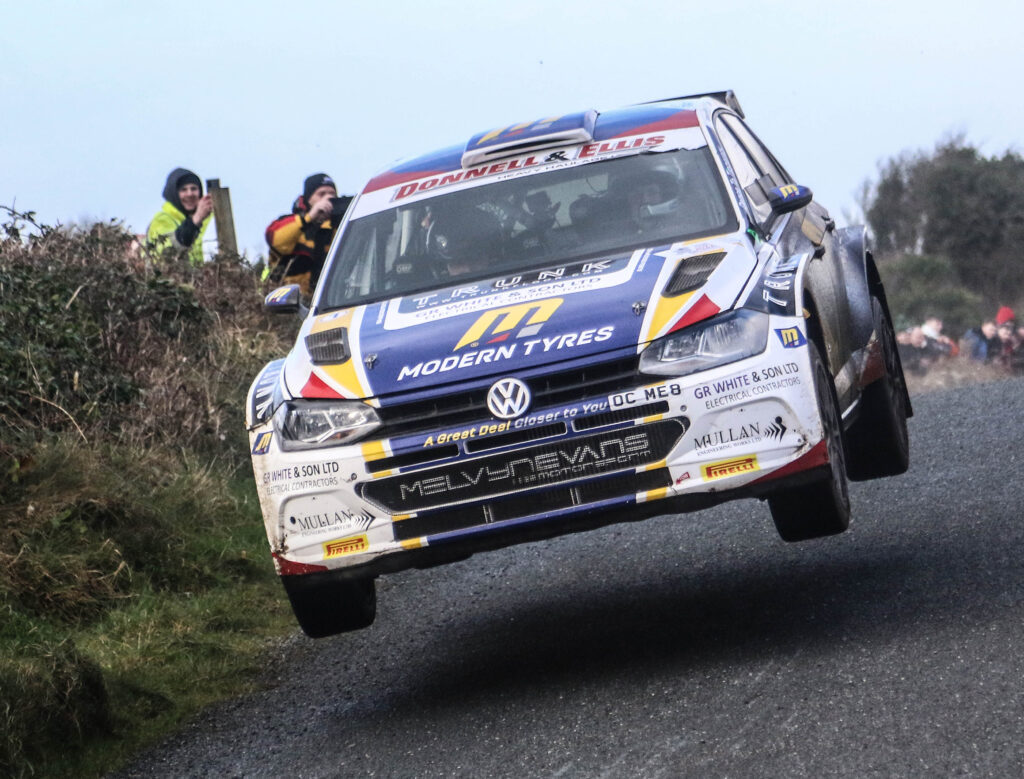 Ali Fisher and Gordon Noble in their Polo on the Sunday stage in Galway. Photo David McDaid.

From a more nostalgic view I watched a historic Mk 2 escort in the late Bertie Fisher’s old colours going through one of the stages on Sunday, a stage used years ago when the original car finished 3rd in 1981 which at was at that Galway Rally all them years ago also in a very wet Galway Weekend and to see Bertie’s nephew Ali and Gordon Noble passing the same spot on the road 41 years after in their Polo reminded me just how much the Galway rally is part of rallying in Ireland. 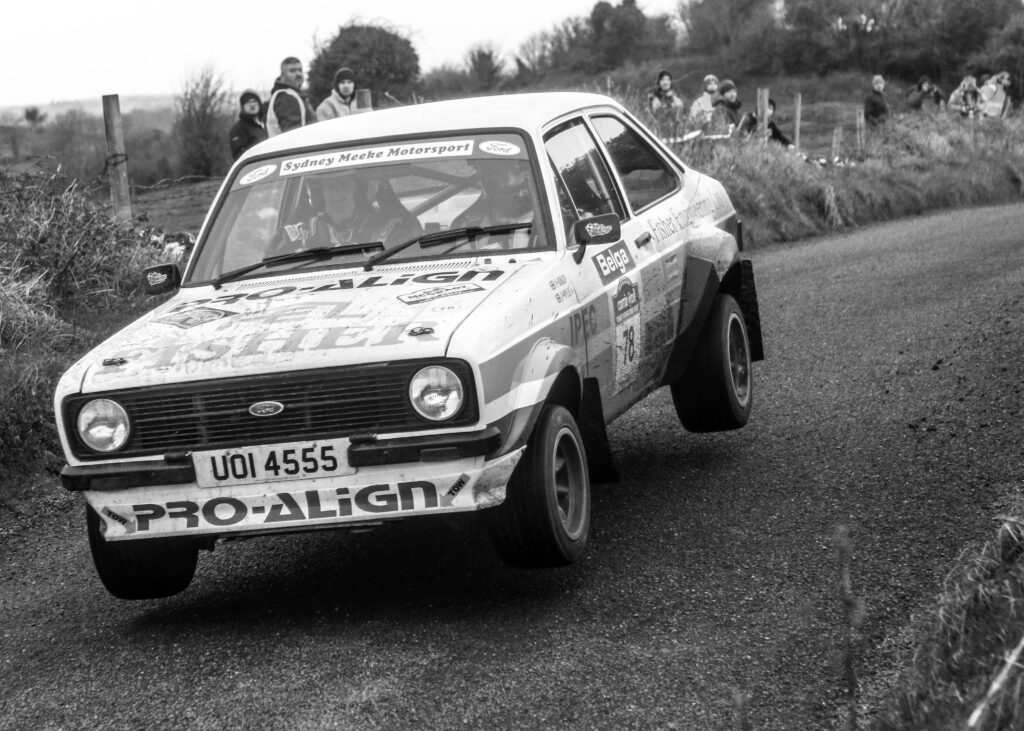 Philip Wylie in his beautiful RS1800 in the memory of the Great Bertie Fisher’s car that competed on the 1981 Galway Rally. Photo David McDaid.

DD Motoring: Rallying is back with the Galway International was last modified: February 9th, 2022 by Brian McDaid
Facebook0Tweet0LinkedIn0Print0