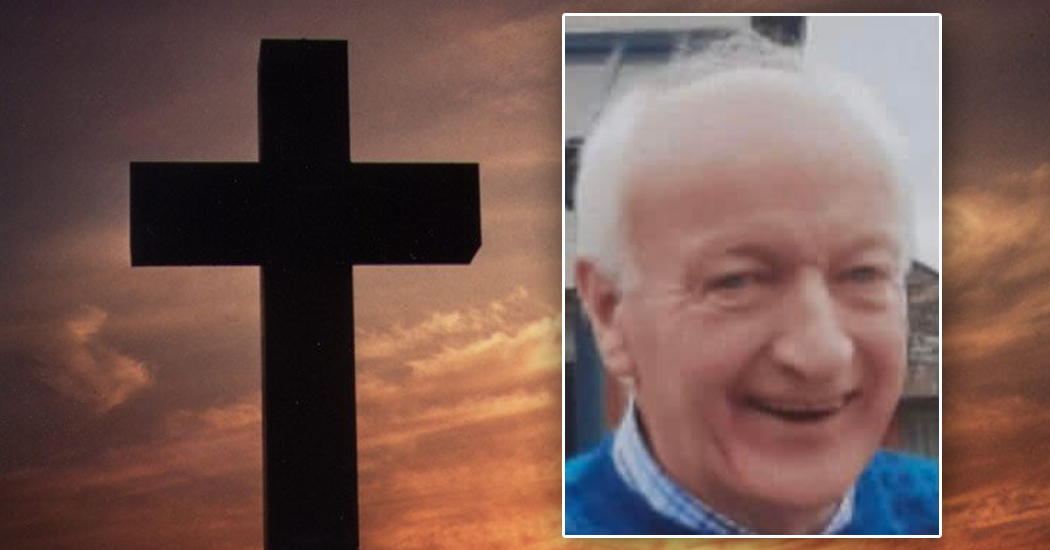 Hundreds of mourners who attended the funeral today of Josie McKelvey heard how the proud Fintown man would want the show to go on.

Family man, musician, GAA fan and lover of Irish culture, Josie was remembered on many fronts as he was laid to rest.

Chief celebrant Fr Donnchadh O’Baoill said his friend will be remembered fondly for many things but family and community are the two which stood out in Josie’s life.

St Cholmcille’s Church in the heart of Baile na Finne was packed to capacity as hundreds turned out to say farewell to a man who had touched their lives in different ways.

It was here where Josie entertained with his fellow musicians over many decades.

Gifts brought to the altar included two CDs which Josie had recorded in 2020, one in English and one in Irish.

The CDs contained many songs Josie feared would be lost forever if he did not record them.

Among the other items were his beloved tin whistle and a painting of a train reflecting the proudness Josie had for the Fintown Railway.

The Donegal colours were also brought reflecting Josie’s love of the GAA, also recalling his own playing days with Naomh Conaill.

Among his favourite was a certain period in 1992 when Donegal senior manager Brian McEniff stopped off in Fintown with the team having captured the Sam Maguire Cup for the first time.

He was proud of all his children and grandchildren but he revelled in grandson Jeaic (son of Seosamh and Susan) playing for the county team.

He said Josie and Margaret traveled around Ireland together, to Feis and Scor, soaking up the Irish culture along the way.

He added that like faith, Irish culture is under siege but that people like Josie McKelvey lived for that culture each and every day.

Fr O’Baoill recalled how Josie even once attempted to get him playing a musical instrument.

He added “Anyone who could open their mouth at all. He even got me to try and play the fiddle.

He paid tribute to Josie’s family for looking after him in his final days and also to the hospital staff.

As his coffin was led out of the church, some of Josie’s close friends played a medley of traditional tunes.

A spontaneous burst of applause broke out in appreciation of a life well lived.

Josie was buried in the adjoining graveyard close to the shores of Lough Finn.

Josie is lovingly missed by his children, Seosamh, Maighread, Fionnuala, Deirdre and Áine. Always remembered by his brothers, Con and Neil, sisters Mary, Nellie and Little Anna, his grandchildren and all extended family, close friends and neighbours. Josie was predeceased by his wife, Margaret, his brothers, Pa and Jimmy, and his sisters, Bríd, Rosie and Kitty.

‘The show must go on’ – Donegal says a fond farewell to Josie McKelvey was last modified: February 10th, 2022 by Staff Writer
Facebook0Tweet0LinkedIn0Print0