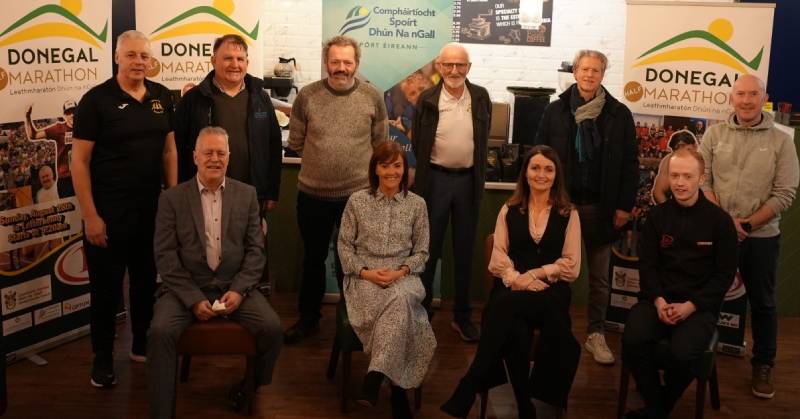 All systems go for 2022 Donegal Half Marathon

Details of the event, which has been held annually since 2014, were announced at the launch at The Bistro at Letterkenny’s Retail Park on Friday evening.

In his address, Myles Sweeney, Donegal Sports Partnership Coordinator, and Donegal Half Marathon Committee Chairperson, said he was hopeful of a big entry for the end-of-summer race.

“We are looking forward to hosting a good event and welcoming people from near and far over the last weekend in August,” he said.

“It’s great to have last year’s winners, Mark McPaul and Monica McGranaghan, here with us for this evening’s launch as well. We want to make the event as inclusive as possible and we would like to encourage more women to take part.

“Once again we have Kernan’s on board as our main sponsor and what a brand to have. We’ve built up a great relationship with Anthony, Cathal and Damian. Kernan’s is a successful Donegal brand and it fits well with the organisation of this event,” he added.

For the second successive year, the Donegal Half Marathon is teaming up with Fáilte Ireland to promote another iconic landmark along the Wild Atlantic Way.

“This year, we have elected Sliabh Liag as the iconic point to highlight and the centrepiece of this year’s Donegal Half Marathon medal will have an image of Sliabh Liag. This gives us an opportunity to promote the Wild Atlantic Way and all that stands for here nationally as well – promoting tourism and inward investment. We are always trying to broaden things out and make it a Donegal event, and the link with the Wild Atlantic Way is another way of trying to achieve,” Mr Sweeney said.

Wishing the 2022 Donegal Half Marathon every success, Cllr Jimmy Kavanagh, Mayor of the Letterkenny-Milford Municipal District, said it was great to see the event back last year, having been forced to go the virtual route in 2020 because of the pandemic.

“I was lucky enough to have had the honour to start last year’s Donegal Half Marathon. It’s a great event, brings great crack to the town and works so well. Congratulations to Monica and Mark on their success last year,” he commented.

“Mary Larkin is a great addition to the Donegal Half Marathon Committee. I remember back in the day, Dessie standing at the council and proposing this event. It has turned out to become a great event and works so well.

“I’d like to mention Eamonn Bonner and John Curran from the Donegal Volunteer Centre and the work that they do, and acknowledge the sponsorship from Kernan’s. Danny McDaid is a great ambassador for the Donegal Half Marathon and is someone who has been synonymous with athletics in Donegal and is such a keen supporter,” he added.

“I’d like to acknowledge the efforts of Letterkenny​ Athletic Club and we have so much evidence of that with local coach Teresa McDaid managing the Olympic team and so on. Donegal County Council is very happy to be involved with the Donegal Half Marathon.”

Speaking on behalf of the Kernan Group, Anthony Kernan said he was delighted to be on board with the event.

“Thanks for the opportunity to be part of the Donegal Half Marathon again this year. It’s an event that is a good fit for our group and I wish everyone the best of luck,” Mr Kernan added.

This year’s Donegal Half Marathon will have the usual starting time of 9.20 am, with Aura Leisure Centre being the event’s headquarters.

To register for the 2022 Donegal Half Marathon, click here.

All systems go for 2022 Donegal Half Marathon was last modified: February 12th, 2022 by Dáire Bonnar
Facebook0Tweet0LinkedIn0Print0