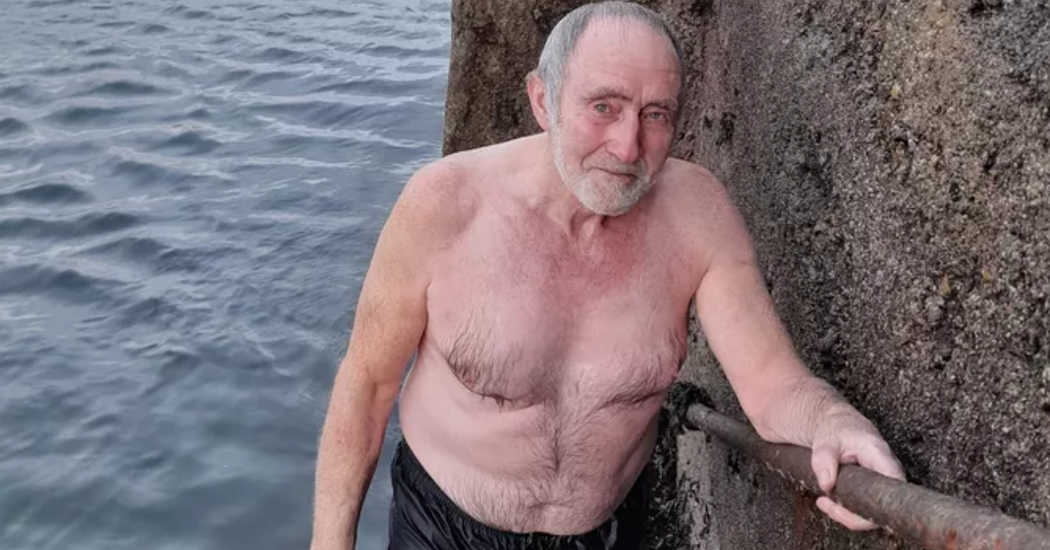 Paddy returns to a hero’s welcome as he raises more than €104K!

An 81-year-old Donegal man has completed a marathon swim around Ireland and raised more than €100,000 for charity.

Paddy Conaghan even had to learn how to swim again after staying out of the water for more than 60 years!

However, he returned to his native Arranmore Island today (SAT) to a hero’s welcome after an amazing journey which started last December.

Father-of-four Paddy undertook his ‘Ducking and Diving for ‘Gemma’s Legacy of Hope’, a counselling service in honour of Burtonport woman Gemma Boyle who died in February, 2020.

Traveling in his specially adapted van, Paddy called into ports and piers all over Ireland popping out to swim for a few minutes here and there.

Paddy completed a total of 300 swims since he left Arranmore on December 4th with his record being 12 dips in the same day in the Rosses.

He lost hearing aids along the way and when his van broke down in Kerry, the local Arranmore Blue Ferry owners sponsored him a new van to complete his mission.

All the time the former coal miner, who left his native Donegal to work in Scotland aged just 16, was raising awareness of his charity caper.

Hundreds of people turned out on the pier for Paddy’s return with night of music and dance planned for the island’s community centre.

Paddy never put a figure on what he hoped his adventure might raise for the local charity.

But not even the chatty octogenarian dreamt he would raise so much cash as his fund stood at more than €104,400 and rising!

Despite missing his 81st birthday and Christmas, Paddy plans to make up for his lost celebrations.

He was delighted when two of his sons, Shaun and Dermot, returned from working in London and Scotland last week to surprise him on his travels.

Fresh from competing his final dip on Arranmore Island, Paddy told Donegal Daily that he was already getting restless again.

“It’s great to be home and the welcome has been amazing. I never thought so many people would turn out.

“But to be honest I’m sure I’ll be getting restless again soon and I’ll have to plan another adventure,” he said.

Despite the cold and the rain, Paddy says he plans to continue to swim everyday.

“Sure it’s good for the body, the mind and the soul,” he laughed.

Anyone wishing to donate can do so on https://www.gofundme.com/f/ducking-driving-for-gemmas-legacy-of-hope

Paddy returns to a hero’s welcome as he raises more than €104K! was last modified: February 14th, 2022 by Staff Writer
Facebook0Tweet0LinkedIn0Print0