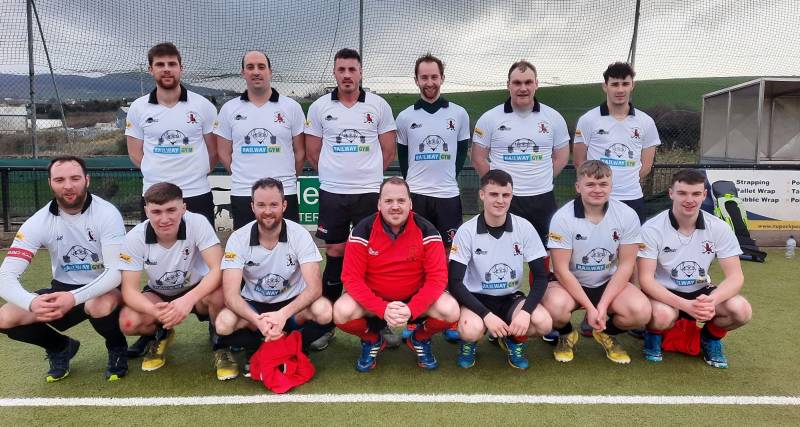 Raphoe Mens 1st team travelled to Newry, knowing anything less than a win would all but end their Premier League campaign.

Raphoe didn’t get off to the best of starts, conceding a goal from a short corner in the first quarter. Newry then nearly doubled their lead from only their second chance in the entire quarter.

The initial penalty corner superbly stopped on the line by Alan Meehan but the rebound unfortunately struck his feet, a penalty stroke awarded.

Raphoe keeper, David Moore, produced a fine penalty save to keep the score at 1-0, which was the turning point in the game.

Raphoe continued to have all the possession but could only muster a few chances, Matthew Lecky, Simon Goudie & George Patterson going close.

With a goal looming Raphoe came out of the blocks in the second quarter, only 1 minute in and Jake Watt produced the goal of the game.

Watt skilfully moved past three Newry defenders to leave himself one on one with the keeper, who could do nothing about the calm lobbed finish from Watt. 1-1.

Raphoe continued into the second half with an instruction of more goals from coach Jonny Long.

It didn’t take long as George Patterson made it 3-1, good attacking work from defender Alan Meehan who drove at the Newry defence and found Lecky whose quick pass found Patterson to slot home.

Raphoe weren’t finished yet, James Wilson chipped in with his first and Raphoes fourth.

Wilson who had a good game throughout exchanged clever passes with Sam Magee & Jack Pearson before very calmly stroking the ball past the oncoming keeper. 1-4.

In the final quarter Raphoe continued with high possession but a lapse of concentration at the back allowed Newry to pull a goal back, yet again another penalty corner given away and Newry punished them. 2-4.

With five minutes left Raphoe pushed for a fifth, Patterson & Goudie had efforts saved, Evan Lyttle had an effort disallowed but it was at the other end a goal was scored.

Newry scored their third penalty corner to make it 3-4 leaving a nervy end to the game for Raphoe but solid defending from Zack West & Tom Eaton at the back and a return to pitch from injury for Lee Stewart who steadied the ship until the final whistle.

Raphoe play their final away game next Saturday in Mossley and again points will be needed to boost their chances of automatic safety in the premier league for another season.