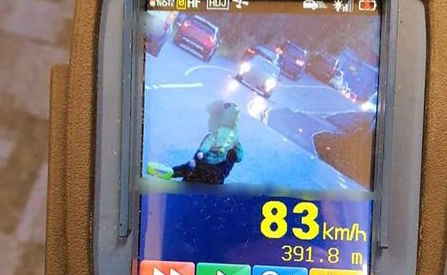 Gardai in Letterkenny have used a hard-hitting image of a child being carried across a road as a car approaches breaking the speed limit.

The image was posted on the Donegal Garda Facebook page today to highlight the dangers of speeding.

It shows a person carrying a child in the Leck area as a vehicle breaks the 60kph speed limit as it is clocked at 83kph.

A Garda spokesperson said “You may notice a pedestrian with a child on their arm crossing the road in the photo below.

“When you are in a built up area, be especially mindful of the speed at which you are travelling. Speed kills. Slow down.”

Members of the Letterkenny Roads Policing Unit conducted speed checks on the dual carriageway and in the Leck area yesterday.

They detected a number of vehicles travelling in excess of the legal speed limit.

The drivers were all issued with Fixed Charge Penalty Notices. (€80 fine and 3 penalty points.)