Only five homes in Donegal have been fully repaired since the Mica Redress Scheme began two years ago, it has been revealed.

That’s a fraction of estimated 5,000 homes in the county which have been built with defective blocks.

Chief Executive Officer of Donegal County Council John McLaughlin said the pace of the scheme needs to be ramped up.

Speaking at a special meeting on Mica yesterday, Mr McLaughlin said that he was not satisfied with the progress so far.

As the council awaits details of the enhanced scheme from government, the delays within the current scheme were outlined by the executive on Thursday.

A further 21 applicants have commenced remedial works under Stage 3, which is the payments stage.

Mr McLaughlin said that up to 1,000 social houses are in need of repair works, and a further 1,000 new homes must be built in the next few years.

“There is a lot of work to be done, a lot of materials and a lot of need for building contracts, we need to look collectively at how that can be done and manage how it can be incentivised.”

Mr McLaughin said the enhanced scheme is still being worked through.  The specifics have not yet been worked out, but Donegal County Council will have a greatly reduced role in the delivery. The council’s role will switch to administration, with all engineering tasks bring carried out by the Housing Agency. 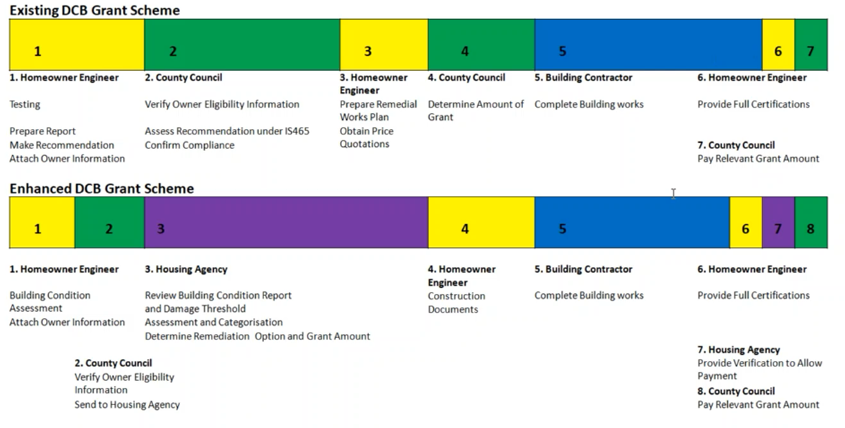 Mr McLaughlin said the council will be committed to expediting their work as part of the new timeline of the revised scheme.

When asked by Cllr Patrick McGowan about his thoughts on the progress so far, Mr McLaughlin said:  “There is only five houses completed, to me, that is the measure – how many houses are finished? It’s not how many that have applied.

“There’s only five out of thousands of houses. Nobody can be satisfied that is good progress, it has to ramp up hugely.”

Mr McLaughlin said he hoped the new scheme would not leave homeowners waiting, adding: “I would hope the new progress will bring that to a point where it can routinely go through the pipeline and come out, and that the timeline is known. We will look at our timeline as a council to do that quickly. I would like for the timeline to be fully transparent for people.”