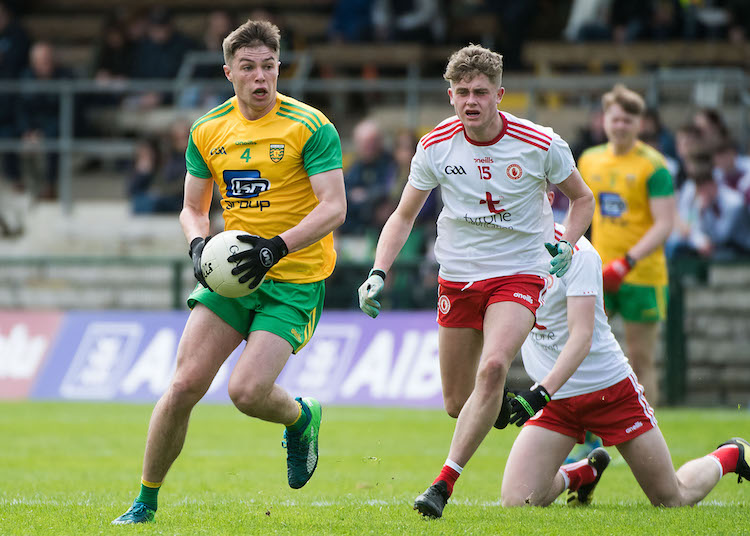 Top second half performance from Donegal to defeat Tyrone

Man of the match Conor O’Donnell got a vital goal before half time as Donegal would go into the break on level terms after being 4 points behind.

Declan Bonner’s side faced an uphill task against the breeze in the second half but dealt with it well and Oisín Gallen’s point with 5 minutes to go gave them an important lead worth holding on to.

Tyrone had a couple of wides and balls drop short late on and Gallen started a quick Donegal counter playing in Peadar Mogan who played in MacCeallbhuí.

The Naomh Conaill man somehow got on to the end of Mogan’s handpass and punched the ball in as Donegal would win by 4 points to claim their second win in the Allianz League Division 1.

Tyrone’s Conn Kilpatrick had the first chance and it could’ve been a goal but he dragged his shot wide.

Patrick McBrearty opened the scoring with a free for the home side and Ryan McHugh quickly scored another point after a poor kick out from Niall Morgan in the Tyrone goal.

Darragh Canavan got Tyrone off the mark with a great point from play and Darren McCurry levelled with a free after 12 minutes with Donegal already having 3 wides at this point.

Both teams then pointed in a matter of seconds as the ball was moved quickly from goal to goal.

McBrearty first scored from a difficult angle on the right but an instant reply from Michael McKernon got Tyrone level as Donegal wouldn’t see another score for over 20 minutes.

Kilpatrick had another goal chance when the ball fell to him from close range but he fired over the bar to give Tyrone a 0-4 to 0-3 lead.

The game was stopped for over 5 minutes as Odhrán McFadden-Ferry collided with Padraig MacNulty, with the latter staying down for a long time and having to be taken off with a bad looking arm injury.

Tyrone got the momentum after this stoppage with 3 points through McKernan and a McCurry free before MacNulty’s replacement Richy Donnelly gave his side a four point lead.

Donegal weren’t going down without a fight however and after some brilliant play in stoppage time between McBrearty and Peadar Mogan gave Donegal a lifeline. The two men interchanged passes and the former got in to a good position before fist passing to Conor O’Donnell who punched into a half empty goal.

Jason McGee then produced a terrific score from far out to level the game at half time.

Both sides came out with the shooting boots on as McCurry scored another free and keeper Shaun Patton scored a brilliant free back.

After a Tyrone shot dropped short,Donegal countered and Oisín Gallen made plenty of ground before playing in Peadar Mogan brilliantly who squared the ball into Jeaic MacCeallbhuí and he got in between two Tyrone players to punch the ball into the net.

Donegal move on to 5 points from 4 games with what was a much needed win.