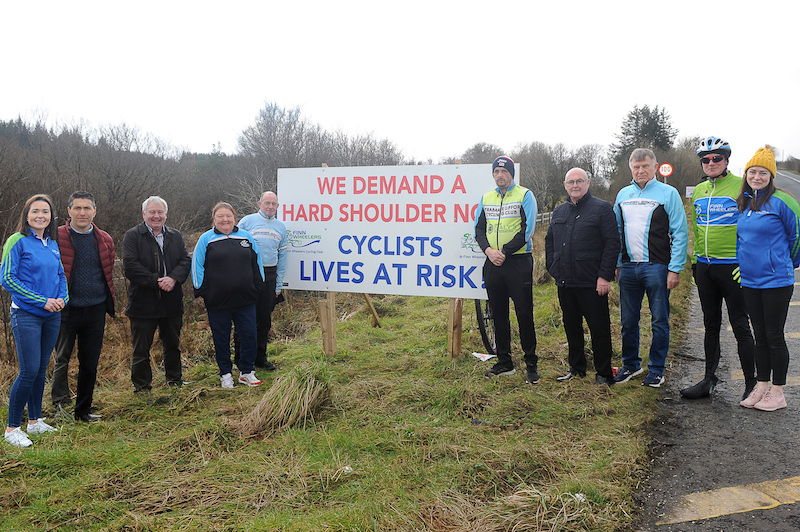 A local cycling club is calling for the construction of a hard shoulder on a dangerous stretch of road between Ballybofey and Donegal town.

A 750 metre section of the steep hill does not have a hard shoulder or climbing lane.

This campaign was initiated after a near fatal road traffic accident involving a club member on the same stretch of road last October.

The experienced member of Finn Wheelers was enroute to Donegal town that morning when he was hit from behind by a vehicle, resulting in serious injuries requiring an emergency response and hospitalisation.

The member’s bike was destroyed.

He is still recovering with from the several injuries he sustained, including the mental trauma that he encountered as days/weeks/months unfolded.

This incident has affected his ability to work and being able to help with his young family.

“Anyone who travels this stretch of road will notice that it is the only section of road between Ballybofey and Bundoran without a hard shoulder or cycle path,” said Brian McElhinney, club chairman.

“The club cannot understand how a hard shoulder and a climbing lane was overlooked when the section of road from McGrory’s Brae to Cappry junction was realigned and widened within the last decade.” 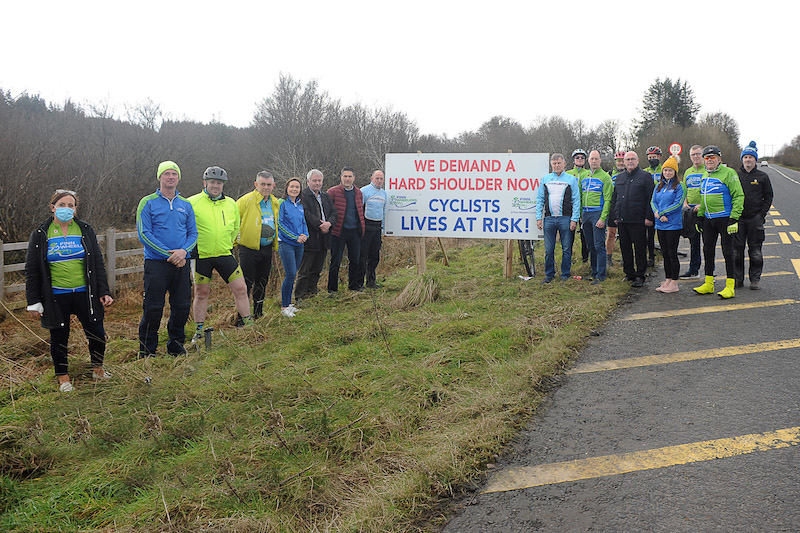 Pictured at the launch of the demand for a hard shoulder on McGrory’s Brea outside Ballybofey by Finn Wheelers Cycling Club are members of the Finn Wheelers CC , Four Masters CC, Donegal Bay CC, Strabane Lifford CC and Clr’s Martin Harley & Patrick McGowan

He added that thousands cycle this stretch of road for leisure or fitness and local clubs with an excess of 500 members use the route regularly.

This route is popular with all cycling clubs in the North West and is used for events like Donegal Ultra  555, Rás Tailteann international race, Cycle against Suicide and Mizen to Malin challenges.

“Finn Wheelers Cycling Club are now demanding that action is taken to approve and construct a hard shoulder on both sides of this 750m stretch of road,” he continued.

“The club is determined to pursue this campaign until it is safe for cyclists and all other road users.”

They are calling on all the local political representatives, Donegal County Council and Transport Infrastructure Ireland officials to prioritise this project.

Local councillors Cllr Martin Harley and Cllr Patrick Mc Gowan attended Saturday’s campaign launch and they have committed to work with the various agencies to pursue the matter.

“The horrific accident on the 2nd October, has awoken our club once again to how

vulnerable we are once we mount our bikes and proceed onto our county roads,” another member stated.

“We are literally putting our lives in extreme danger due to numerous areas that are not suitable for all modes of transport. This incident has frightened many people who are now less enthusiastic about cycling as a form of exercise. The government is promoting cycling as an active form of travel for health and wellbeing with environmental benefits, so everything needs to be done to make it safe.”

The club also pointed out that, in recent months, €8 million in funding has been allocated to the council for walking and cycling routes.

“Surely some of this allocation should go towards the 750m of Mc Grory’s Brae.”