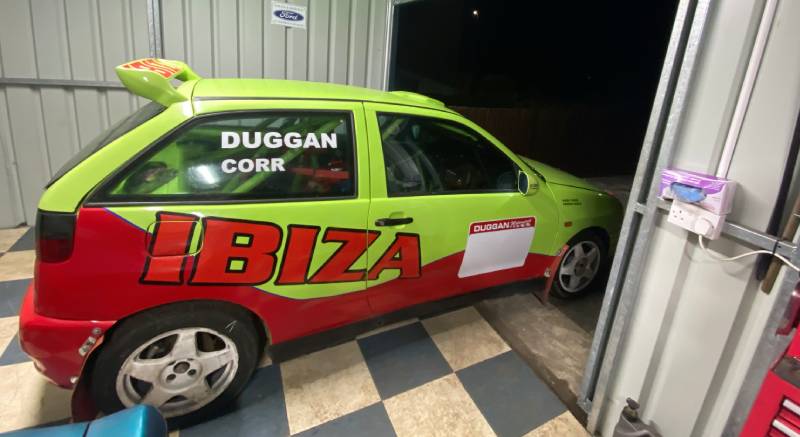 This story starts with an empty window washer bottle in Kerrykeel.

One of them times when wipers across a window leaves the window worse, add to that low winter sun completely blinding any chance of seeing the road ahead.

Even though it was a Saturday afternoon, a time that most garages would be closed, the door of one of the oldest garages in Donegal was sitting opened and a car was sitting running inside.

I doubled back and pulled up at the door and went in to see if someone could give me a wee taste of water for the window washer. I was surprised to find a friend from my youth crawling out from under the black Toyota Celica he was working on.

“Brian McDaid,” he called out. It was Timothy Duggan, someone that I haven’t been chatting to in maybe twenty years.

My very limited time in a rally car was navigating for Timothy Duggan in a few night navigation rally’s away back in the eighties in a Talbot Sunbeam 1600 and also navigating for the late Mick Henry in an RS2000 on loan from Timothy at the time. (And the nearest I got to driving a rally car was that same RS 2000 on a tow rope the whole way from Sligo to Letterkenny when the cars engine seized and with no trailer up at the rally the only way to get it home was in a tow rope behind Timothy which was a sharp enough run in the middle of the night as I remember it.) 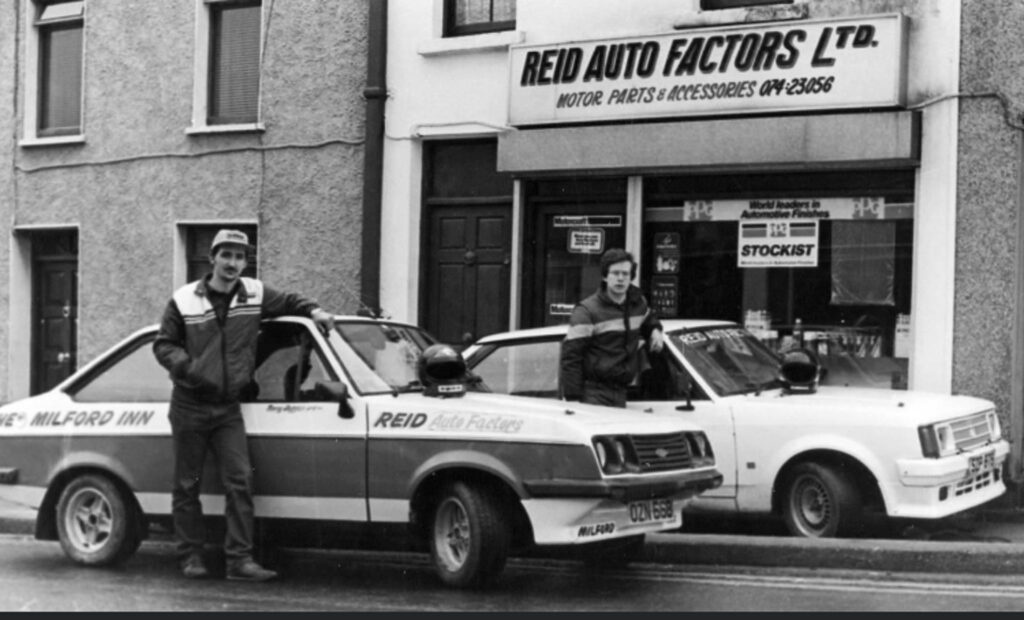 Timothy Duggan back in his rallying days with his RS2000 pictured with John Crumlish outside sponsors Reid Auto Factors on the Port Road. Photo Brian McDaid.

As you can imagine there were some memories recalled standing in that beautiful old garage complete with old pit boards still in the floor where a pit once operated in the centre of Kerrykeel. And that was just from our own era standing in one of the typical old garages from bygone days.

This garage was built before Lough Swilly made the move from the railway to road and along with a busy garage.

It also was where the then owners, Ward Bros, ran their bus company from, which was eventually taken over by Lough Swilly when they were building up their bus route network. 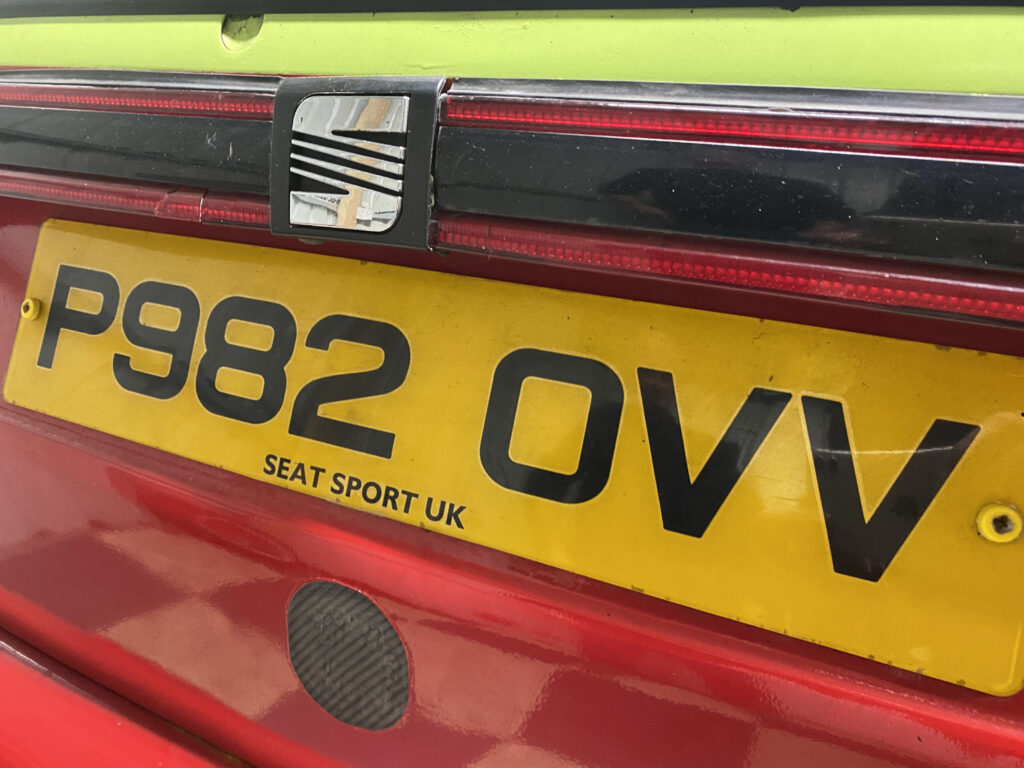 The original number plate fitted by Seat Sport Uk back in the day for Mark Fisher still hold pride of place on his old Seat. Photo Brian Mc Daid.

Standing in that old garage just over a month ago I thought there’s a story of some sort to be told from these old walls but what I didn’t realise was that I was searching for it in the wrong century!

Having a look through the entry list for the forthcoming 2022 Mayo Stages Rally this weekend I spotted Timothy Duggans name seeded at 128th in a Seat Ibiza. A phone call followed to Timothy and a wee spin down to Milford that evening to get a few words in his upcoming return to rallying, not just after Covid lockdown but a longer break from rallying of nearly a decade. 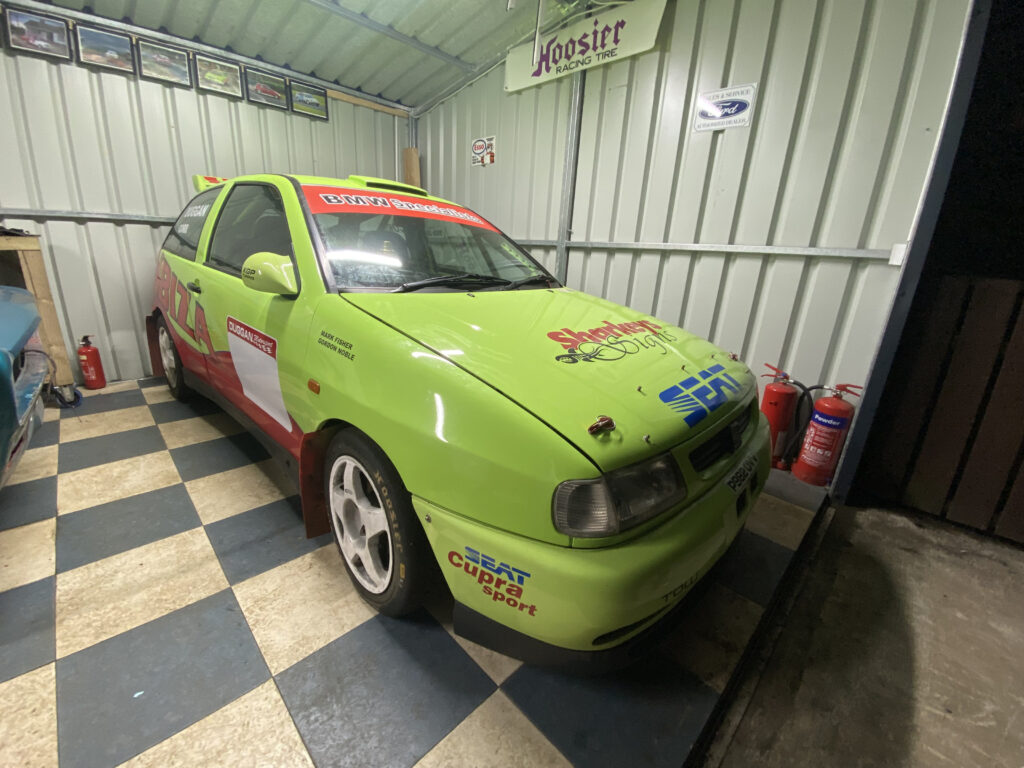 Talking to Timothy on Tuesday night I was to discover that his story starts back 26 years ago when Timothy went down that old Garage in Kerrykeel to give Ernest Stewart a hand to build a historic Hillman Hunter rally car and is still there now working for the present owners Kerr Auto Repairs.

Ernest and his son Andrew took over the garage business from Robert Ward and along with building rally cars the garage was one of the main dealers for Seat back when Timothy started working there.

The Stewarts bought a Seat Ibiza Rally car which complemented their Seat Dealership which was in need of a good bit of repair. Timothy ended up buying this rally car and rebuilding it himself, working in the evening in the old garage in Kerrykeel.

The car was originally built by the Seat Motorsport division for the Late Mark Fisher who was tragically killed in a helicopter crash with his father Bertie and sister Emma in 2001. 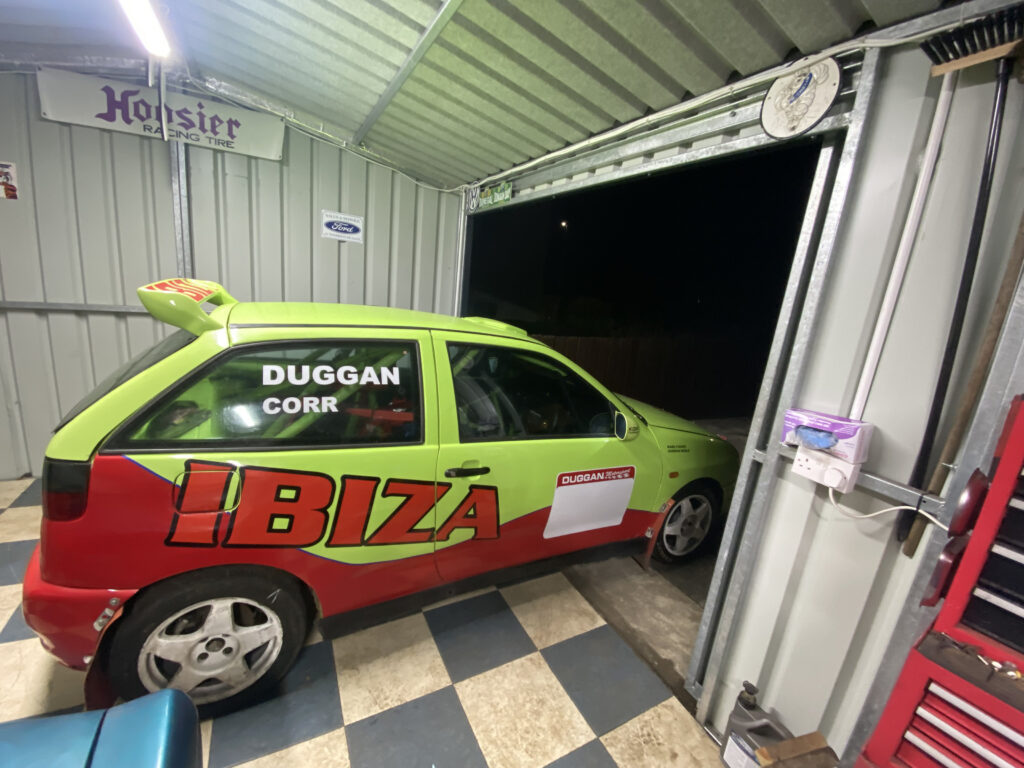 Timothy rebuilt Mark’s old Ibiza in Kerrykeel but kept it as it was originally in the old Seat Challenge Colours.

Timothy started his rallying career in the mid eighties in Sunbeams and various escorts and also navigated with Ivan Stewart and also did the mechanical servicing on Roger McMahon circuit racing cars which included races in Central Europe, and ended up track racing.

Becoming interested in competing in circuit racing himself, Duggan decided to compete in the Peugeot classic race series in Mondello park in his ex Mark Fisher Seat.

Even though this was a very long haul leaving Donegal in the very early hours of a Sunday morning to Mondello on the other side of Dublin in Co. Kildare and drove back late every Sunday evening, Timothy’s efforts were reaping great success winning the National Classic Championship outright in 2016 and 2018. 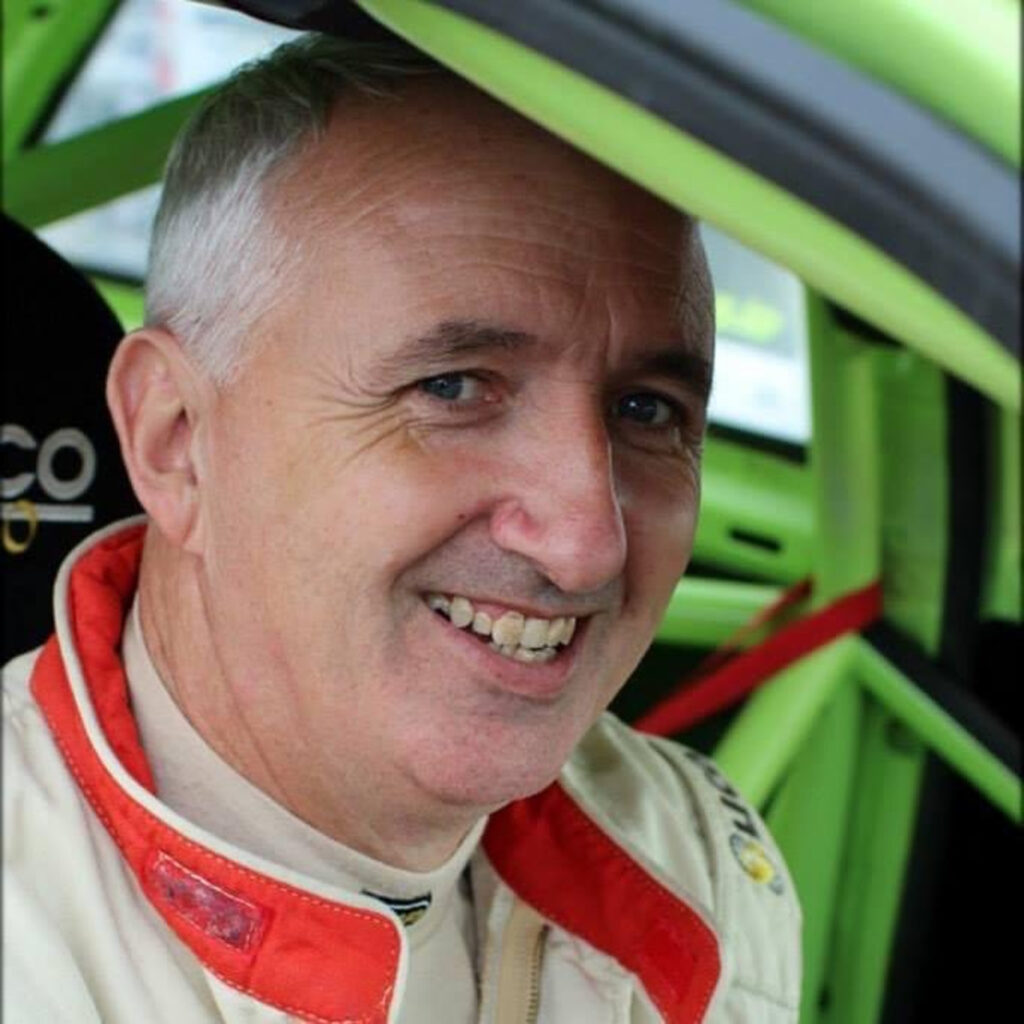 Timothy Duggan after he won his second championship at Mondello Park in his trusty Seat Ibiza.

His driving skills on the race track in a car that was originally built for rallying had added a new and very unique chapter to an old rally car and linking up with circuit racing ace William Kellett was one of the key factors to perfecting a different driving style on the track.

Timothy is far from finished yet the car will be back to stage rallying this weekend when it lines out at the Mayo Stages Rally. Timothy had an outing on the car before the lockdown in the Harvest stages rally which was based around Termon which served the talented Donegal driver well, getting the car set up better, especially in the gearing and now the Seat complete with an engine built by Kevin Gallagher from KGP Engineering. 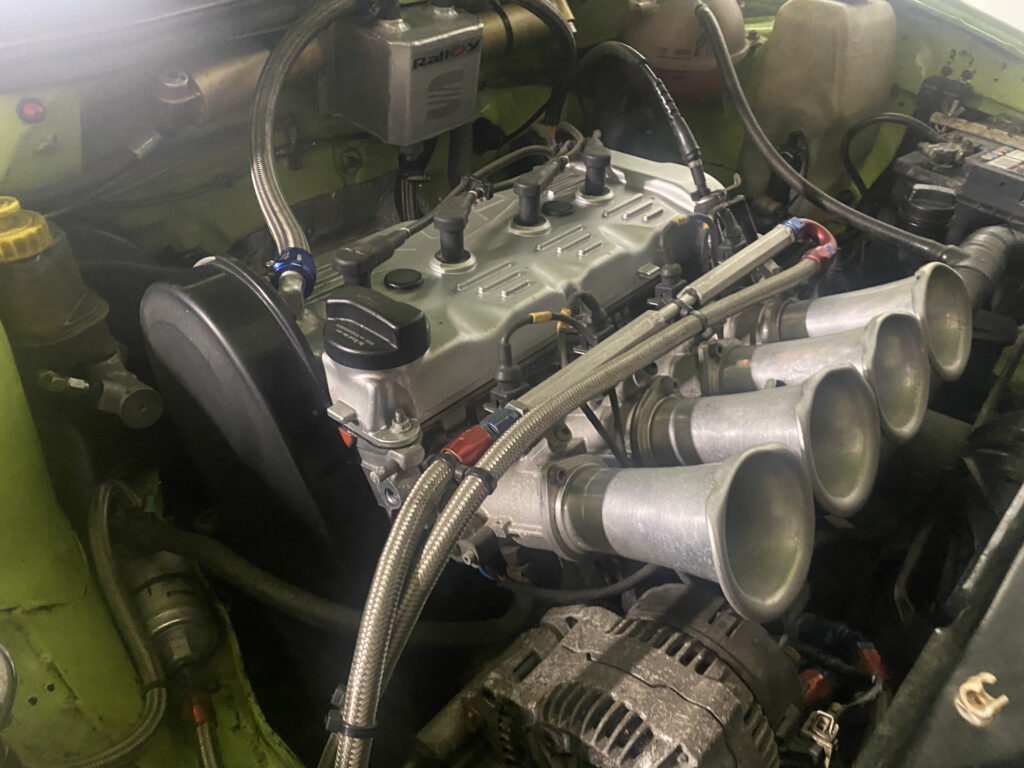 The beautiful power plant built by KGP Engineering all ready for the opening round of the National Rally Championship in Mayo this weekend. Photo Brian McDaid.

The ex-Fisher Seat has had a very different journey to championship success changing from the 2.2 miles around the track in Co. Kildare with all its 13 turns with names like the great and late Ayrton Senna who raced there and won on his way to multiple F1 World Championships.

Mark Fisher was 27 when he died and was following in his fathers Bertie’s footsteps who we all grew up admiring in Donegal.

Mark had talent in abundance navigated by Gordon Noble and Letterkenny’s Rory Kennedy on events locally and in the UK like the Lombard RAC and Mintex to name just a few, starting off on a very promising rally career.

As Timothy would say himself, the wee Seat might not be everyone’s type of rally car, but this wee piece of motorsport history has served Timothy well.

The old steering wheel used by Mark Fisher still steers the 2 litre Ibiza now well worn down by Timothy Duggan over the years, who will head down the road to Mayo this Saturday to prepare for the Rally on Sunday. 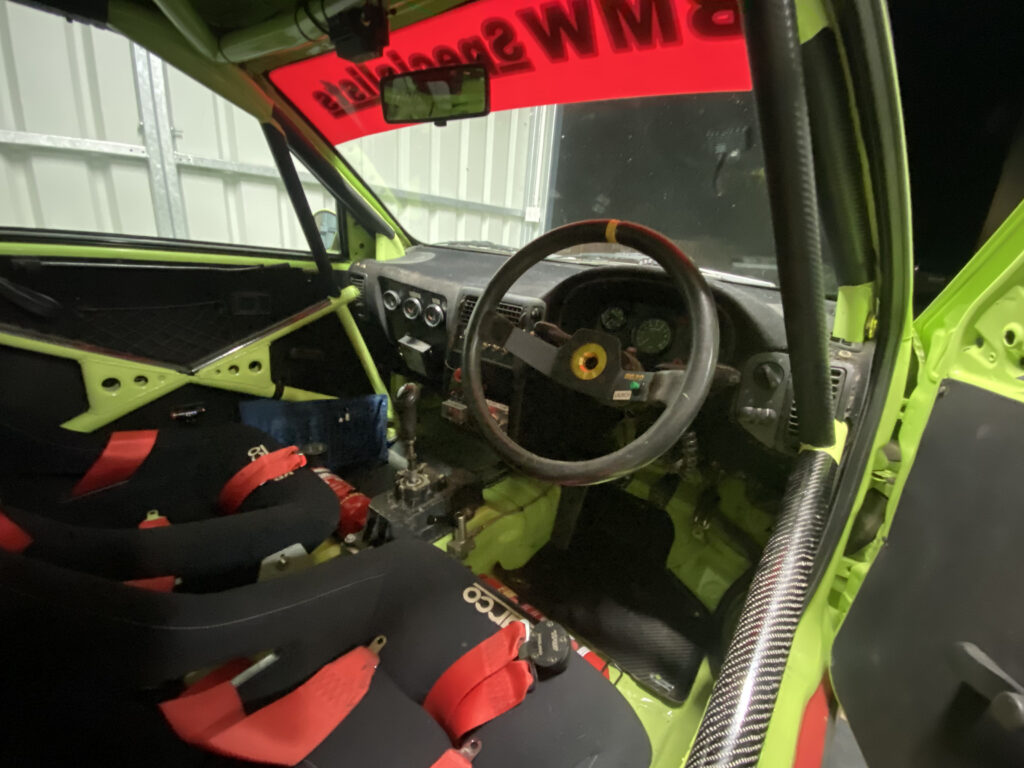 The interior of the Seat Ibiza complete with the originaly steering wheel of Mark Fisher ready to race in Mayo this weekend.Photo Brian McDaid.

The start lights in Mondello Park are now a just a memory on a very special journey of this little green Seat which will be eagerly sitting on the starting line at 128th on stage one on Sunday morning as the trumpets on the carbs will pull in some fresh Mayo air after lockdown at the official start of the National Rally Championship.

I’ll leave the last word to the late Mark Fisher interviewed with Timothy’s Seat Ibiza in the background before the rally challenge started all them years ago as Mark chats about his father Bertie and the road ahead.