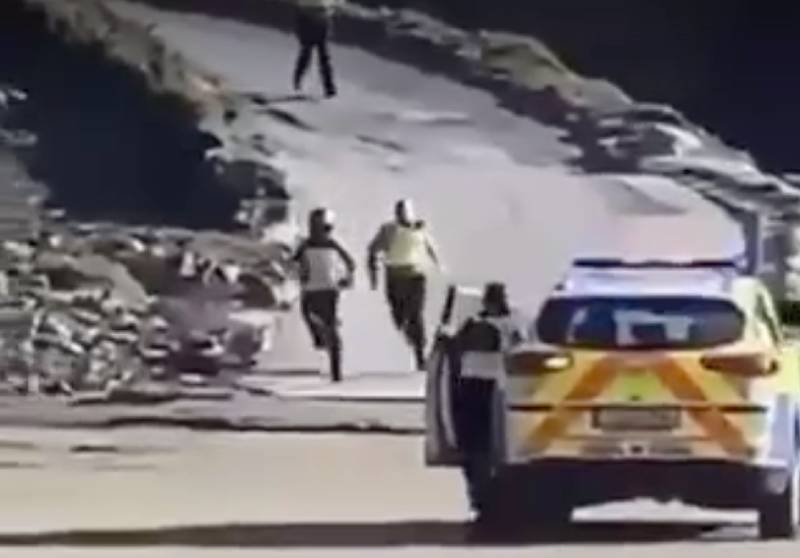 One man was arrested following a dramatic chase on a Co Donegal beach yesterday.

Beachgoers were left stunned following the pursuit between Gardai and two motorcyclists at Rossnowlagh beach.

The pair had been spotted driving on the beach which was busy with beachgoers.

Gardai requested the drivers to stop but they sped off.

Gardai pursued the drivers who tried to make their escape up a slipway off the beach.

However, other Gardai managed to block their exit.

One of the motorcyclists managed to escape but another fell off his bike and was pursued by Gardai on foot.

He was arrested a short time later.

A Garda spokesperson told Donegal Daily “Gardaí were alerted to an incident on Rossnowlagh Beach in Donegal at approximately 3.15pm on Sunday, 6th March 2022.

“A number of motorcycles were observed driving dangerously along the beach at this time and had failed to stop when requested to by Gardaí.

“As one of these motorbikes drove across the beach, one of the drivers came off his motorcycle.

“Whilst on foot, the driver struck an approaching Garda member in the face. The man attempted to run away but was pursued by Gardaí and arrested shortly afterwards.

“The man, aged in his 20s, was detained at Ballyshannon Garda station. This male was charged with Road Traffic Offences and has been released on station bail to appear before Ballyshannon District Court on 1st April 2022.

“Investigations in relation to the incident are ongoing.”

Separately, the driver of a car, a man in his late teens, was also arrested at the same location for Dangerous Driving offences.

This male was charged with Road Traffic Offences and has been released on station bail to appear before Ballyshannon District Court on 1st April 2022.

Watch the videos below: