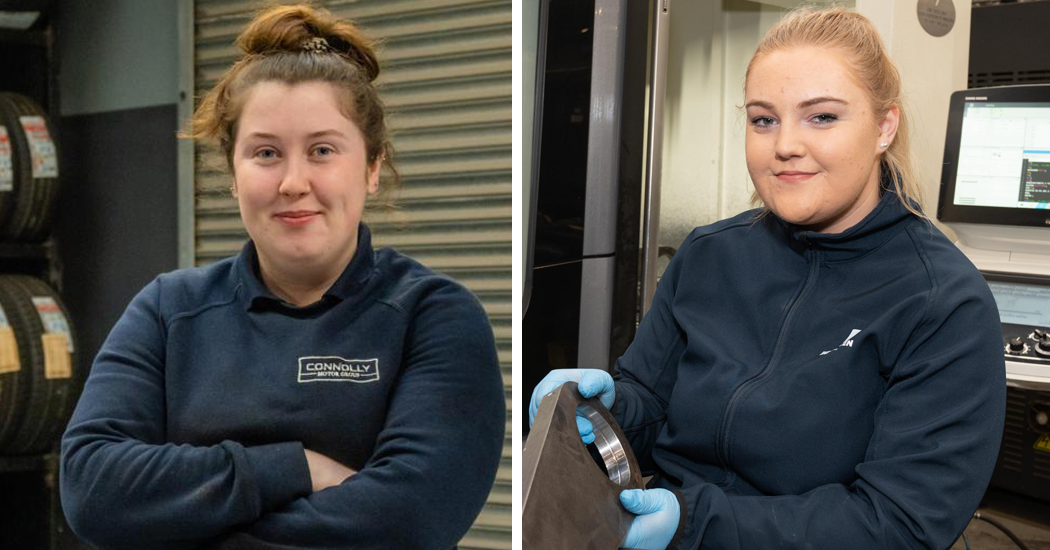 Celebrating the female apprentices who break the bias

The world is celebrating diversity this International Women’s Day, and two young local women are leading the way in their own communities, whether they realise it or not.

The theme of this year’s campaign is ‘Break the Bias’, celebrating and valuing the difference that women bring to communities, workplaces and schools.

Andrea McLaughlin and Caoimhe McLaughlin, both from Inishowen, are charting their own paths in apprenticeship fields not often considered by women – Toolmaking and Motor Mechanics. Their career journeys have just begun with Donegal ETB, but they are already seeing more gender balance in their industries.

Caoimhe, aged 23, often drove past the Inishowen Engineering metal fabrication company, a major employer in her area, but she never imagined she would work there and love it.

The young Carndonagh woman began a Toolmaking apprenticeship five months ago and, with that, she became the first female to work on the factory floor.

“I’m excited to see where it takes me,” she said. “It was something completely out of my comfort zone. I’m a very hands-on person but it was something that I’ve never tried. As soon as I started, I loved it. You’re always doing something different and there’s always something new to learn and progress in.” 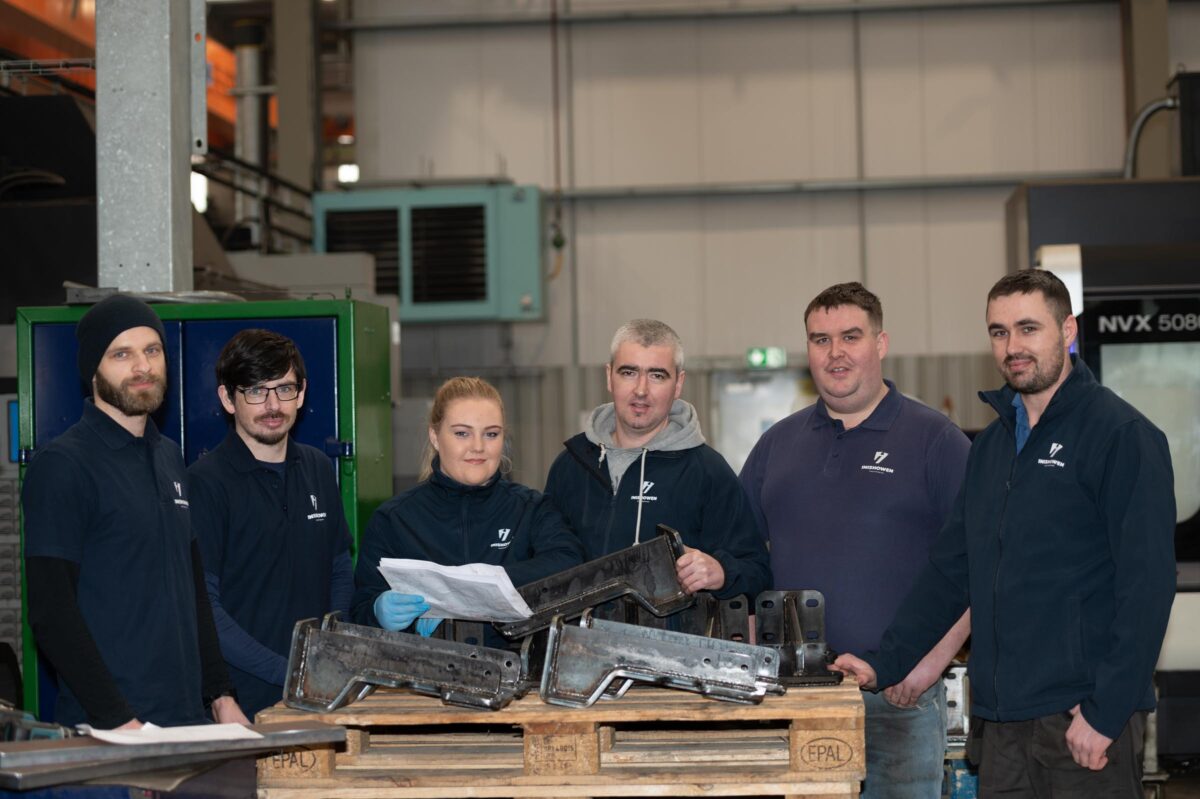 Caoimhe was introduced to the company through her uncle Michael, who has worked there for 11 years, and a short trial was all it took for her to see that she was sure about becoming an apprentice.

Now, she is training on a mini mill in the CNC machine shop. One other positive she sees is four other young women following in her footsteps and joining other floor teams, which were traditionally all male. While she would love to see more women in the various roles, Caoimhe found that the only barrier she had to overcome personally was within herself.

“When I first started I was nervous. From day one, the boys have been showing me so much, and they always go above and beyond to help me with my training. After a few days of me coming out of my own shell, I was very comfortable being one of the team,” she said.

Andrea McLaughlin from Muff is driving her own career forward as an apprentice Motor Mechanic at Connolly Motor Group (Connolly Volkswagen) in Letterkenny. Having started with no prior knowledge of motor mechanics, she is learning from scratch. 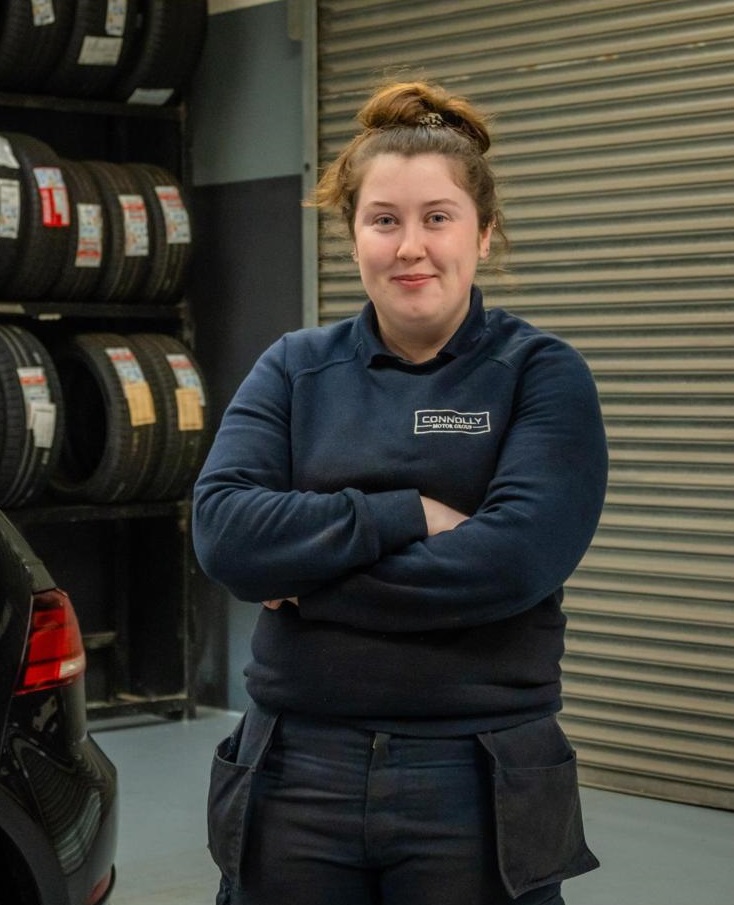 The 22-year-old always wanted to take the less-traditional routes.

“I was always a more practical person. I was working on a construction site as a general labourer when I heard an ad on the radio and applied to be an apprentice,” Andrea said.

“My dad always had cars so I was interested in learning about them more. I went for an interview in Connolly’s and I got it. Now I help with all parts of the mechanics work and I change tyres, I do updates, work on brakes etc.”

Andrea is also the only female in her team, but, when asked about what that means to her, the truth is that it has never crossed her mind.

“I never thought about it, it doesn’t bother me. What odds? I like work that keeps me busy, and I’m really enjoying learning,” Andrea said.

Through their apprenticeships, Caoimhe and Andrea will be learning on-the-job with their employers and off-the-job in a Training Centre or Educational College.

Andrea’s road ahead is an exciting four years of training to become qualified and Caoimhe is already looking forward to applying her skills: “I’m looking forward to starting the different modules.  With the amount of knowledge and skills combined, I would like to think that over the years I could progress to a new role or to a new machine. But it’s a dream job here, the hours are great.”

Donegal ETB prides itself on creating a supportive atmosphere for women in trades. The number of apprenticeship programmes has expanded greatly in recent years with over 60 different types of apprenticeship now available across a range of sectors including Electrical, Finance, ICT, BioPharma, Recruitment, Hospitality and Food, Healthcare and Property Services.

The number of female apprentices in the traditional craft trades is increasing, thanks to inspirational young women like Andrea and Caoimhe who are setting an example for school students of today.

Caoimhe says: “There’s nothing stopping any girl or woman from doing the same job as a man. If you put your mind to it, you can achieve anything.”

Donegal ETB actively encourages women to think about working in and applying for training in non-traditional fields. To promote the entry of females into designated apprenticeships, a gender-based bursary of €2,666 may be paid to qualifying companies wishing to train apprentices in specific occupations.

The first step for anyone wishing to do a craft apprenticeship is to find an approved employer willing to employ them as an apprentice.  The employer then registers the apprentice by contacting the Apprenticeship Section of Donegal ETB. Craft apprenticeships are a seven phase programme with phases 1, 3, 5 and 7 spent on-the-job with their employer and phases 2, 4 and 6 in a training/educational environment (ETBs and ITs nationwide).

Donegal ETB’s Senior Training Advisor, Claire Lernihan, explains that: “An apprenticeship commences when an approved employer registers their apprentice with SOLAS by contacting Donegal ETB.  In recent years, apprenticeship has expanded to include many occupations outside of the traditional craft related areas and with over 60 programmes spanning the full range of industry sectors, and qualifications from certificate to PhD level, the number of women who are choosing to take the apprenticeship route is accelerating every year.” 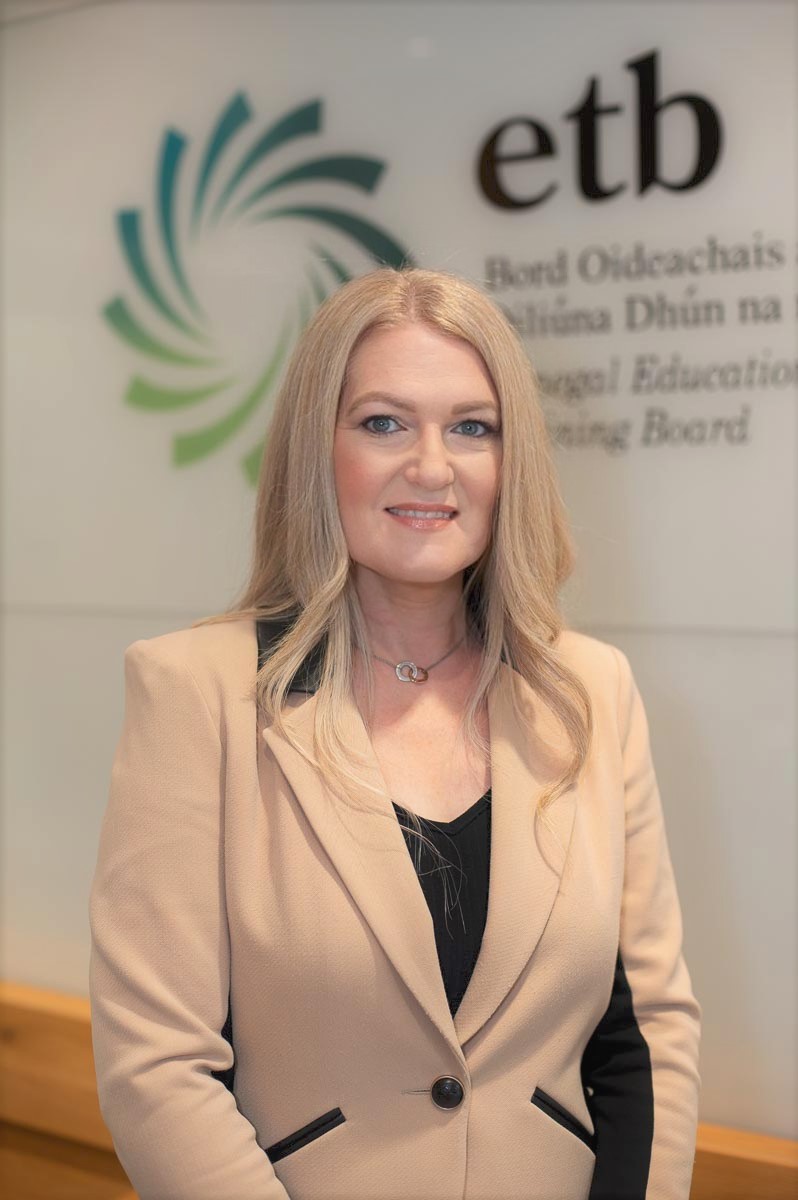 “We would encourage people to see the full list of available apprenticeship training in Ireland on www.apprenticeship.ie and then to contact our Apprenticeship Team who will be happy to answer all questions and explain in more detail the options available in relation to apprenticeships.”

If you are interested in pursuing an apprenticeship or are an employer wishing to find out more, simply contact Donegal ETB’s Apprenticeship Team on 074 9120500 or email apprenticeship@donegaletb.ie