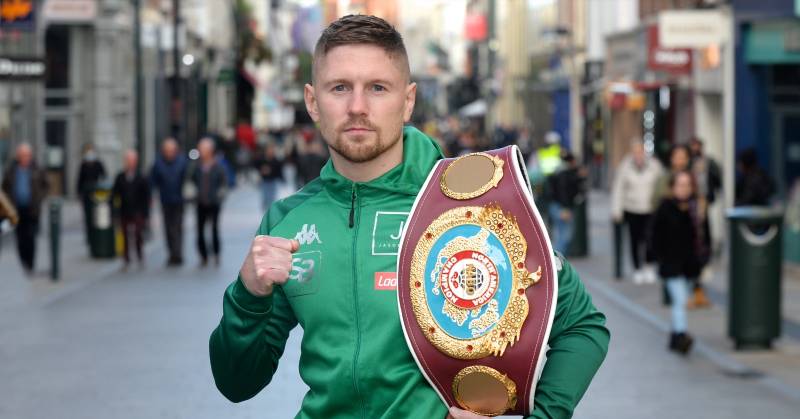 Jason Quigley is excited to get back into the ring, however he is unsure of what lays in store for him next, but has been warned that there will be no fights before his wedding next year!

In an interview with Donegal Daily, Jason spoke about his upcoming documentary ‘Lift your Heels’ which airs on Virgin Media Two on Thursday 10th March at 10.30pm, his training before and after the world title fight, his plans for the future in and out of his boxing career, and his upcoming marriage next year.

The Ballybofey man lost out in the Middleweight World Championship title fight via a second round TKO to Demetrius Andrade, in which he suffered a broken jaw. Requiring surgery to put in two plates, Quigley is just a couple months off getting back to full training without issues.

“Everything has been going great thank god I had surgery to get the plates removed 3 weeks ago and that was another successful surgery and the jaws fully healed,” Quigley said.

“It was very difficult and frustrating and looking back now, obviously it was a great achievement (to get a world title fight) but it’s always going to hurt me that I was that close to becoming a world champion and fell just short.

“Once I get back and that all comes together I’ll sit down with the team and see what’s next. There’s nothing in my own head about where I’m going next but we’ll see what’s the best way to go.

“I’ve a busy schedule ahead of me (with the wedding) and I’m looking forward to tying the knot with April and spending the rest of our life together.

“I’ve been well warned, she doesn’t want no black eyes or broken jaws before the wedding so I’ll have to have a chat with the team to make sure that happens!”

The documentary is a look into Jason’s life on the build-up to the world title fight with Demetrius Andrade as well as a look into his personal life, talking about relationships and difficult times he’s had to overcome inside and outside of boxing.

Despite starring in the fly on the wall documentary, Jason admits he is nervous to see the final outcome.

Quigley said: “I’ll be sitting down with the family to watch the documentary. I’ve seen a rough edit of it but I’m still on edge now before watching the full thing on Thursday night.

“My mother’s supported me through whatever I’ve wanted to do and she sacrificed so much at a young age to give me the best possible life I could have and I’ll just be forever grateful for it.

Jason spoke about his experience of the crazy last couple years everyone has faced, but he got into a perfect routine that he enjoyed during these times, having a nice balance between training and spending time with his family.

“I was in Donegal thank god, a lot of people didn’t go through a great time but I loved every bit of having that bit of time at home. Before I was always living out of a suitcase and being ready to go on the hop every turnaround but I really enjoyed spending time with my family.”

Looking towards his future, Jason wants give back and help those struggling, as he knows what it’s like, having had his own personal experiences when he was younger.

“My main goal is to help people, I’ve been very open about mental health and struggles I’ve had myself at a younger age but I’m thankful to now be in a good place.

“For me, what I want after boxing is to help people to live a good healthy lifestyle and a good structured routine with exercise and being able to prioritise things in life and to look at the good things in life to become a much happier person.”

While his love for boxing is still as strong as ever, he commented on the Josh Taylor vs Jack Catterall fight, one of the frequent questionable outcomes in some of boxings biggest fights in recent years.

“This has been going on for years in boxing to be honest, I think people need to be educated on what way professional boxing is being scored and what are the judges looking for in a fight.

“If there is a controversial decision, the judges need to come on video and explain themselves and express the reasoning behind their scoring so the people and fighters can understand.

“I scored it 3 rounds to Jack Catterall, I thought he won the fight, and for a judge to have it 3 or 4 rounds in the opposite way is crazy, so it’s something that needs to be addressed big time.”

Irish boxer and Ladbrokes ambassador, Jason Quigley, features in a compelling documentary that tells the story of his journey to one of the most important fights of his career. ‘Lift your Heels’ documentary will air on Virgin Media Two on Thursday 10th March at 10.30pm.