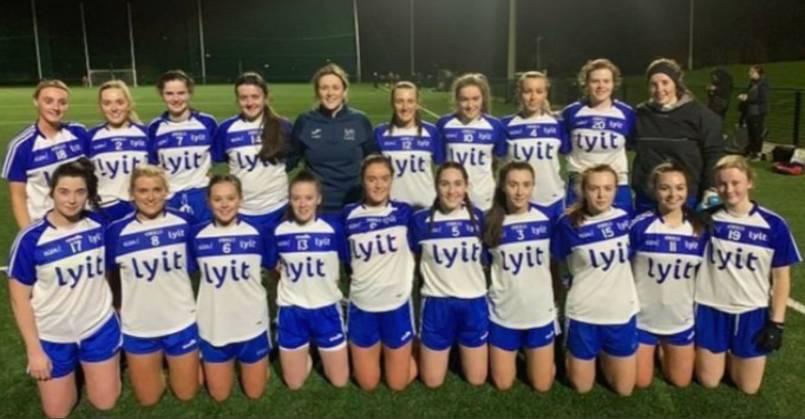 A tough third quarter in which LYIT conceded 2-4 to no score gave MTU Cork the victory in the Moynihan Cup final.

Katie Long was on shooting form as she scored 5 points in the first half, while her one missed free hit the post and fell to Lauren McBride to score LYIT’s goal and give them a 1-6 to 1-3 lead at half-time.

But four points and 2 goals from Eimear McCarthy and Cliodhna Murphy’s second goal of the game gave Katy Herron’s side little hope of a late comeback.

Despite this, LYIT rallied and a late Dearbhile McCaffrey goal gave them a slim chance but they ran out of time.

Long got the first score of the game from an early free but Ava Looney got MTU level.

Looney got the Cork side ahead from a free and almost had a goal moments later but her shot went just over for another point.

Abby O’Mahoney had another goal chance but Aoife McColgan and Danielle McGinley did well to get in the way to block the shot as it was 0-3 to 0-1 at the water break.

Long got another free and took it well to leave a point in it after 20 minutes.

Abby Quirke’s shot dropped and hit the crossbar and Cliodhna Murphy got to the ball before McColgan and poked it into the net.

Long had another free to score her third point of the game, and her first point from the left hand side.

Emer O’Neill found Long with a great pass to get LYIT’s first point from play.

LYIT got in front as Long missed her first free of the game, but it hit the post and fell to Lauren McBride who reacted quick and smashed the ball in to the roof of the net.

A super score from Long to get her 5th point of the game and Ciara McGarvey almost caught the MTU keeper out but got a point just before half-time saw LYIT go into the break with a 1-6 to 1-3 lead.

O’Mahoney got the first score of the second half and Looney again was at hand to play in Murphy to bring the Munster side to within a point.

Cork were back in front as Eimear McCarthy’s shot was going low but it took a deflection and went over McColgan and into the back of the net.

Looney pointed again and good play from MTU saw Murphy get her second goal of the game.

Niamh Ryan scored from a free as MTU extended their lead and LYIT couldn’t get up the pitch as easily as they did in the second quarter.

Long scored a free and a long awaited point for LYIT as they looked to mount a late comeback but a Ryan free gave MTU their 7 point lead back.

McTaggart scored a great point from play and Long got her 7th point and Meadhbh Daly scored a fantastic point.

The same two combined and the former smashed the ball into the net as LYIT had a small chance of an epic comeback but the referee blew for full time as LYIT lost by 3-10 to 2-11.