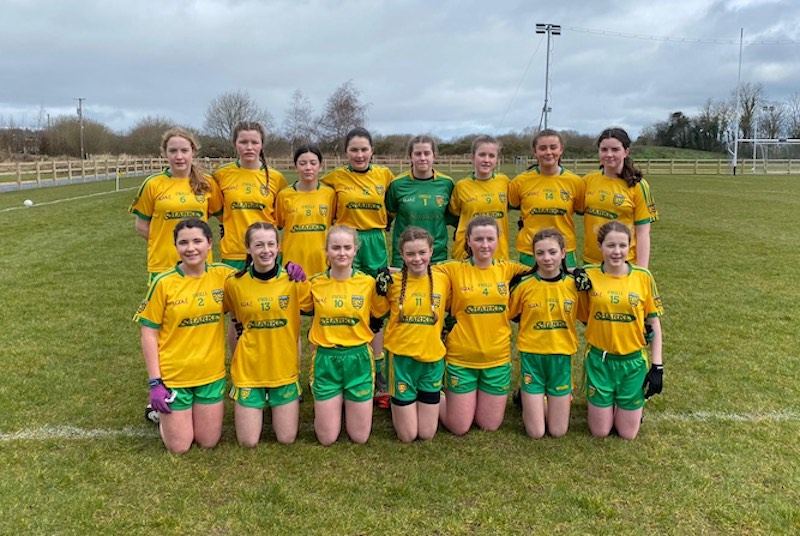 IT’S three wins from four for Donegal’s U14 girls after the second round of the Ulster Championship.

Following wins over Derry and Tyrone in Cookstown in the first round, Donegal hosted Antrim and Monaghan at Naomh Padraig Lifford on Saturday in the Ulster Championship ‘Festival of Football.’

Under the format, counties play two games on each day, each lasting 40 minutes.

First up for Donegal was Antrim with a tit-for-tat scoring battle throughout.

Kayla McHugh (Ardara) linked up well with Caitlin McFadden (St Michael’s) on a number of occasions so that Donegal led by 1-03 to 1-02 at the break.

Donegal had several wides however and should have been further ahead.

At the other end Aibhe Ward (Glenfin) and Laura Boyle (N Columba) were outstanding in defence both putting in good blocks during a period of Antrim pressure.

Donegal were reduced to 14 players after a sin-bin for keeper Lauren McArdle and Antrim took advantage of the extra player to go into a two point lead.

Just as it looked the visitors would take the points, McFadden popped up with a last-minute goal to give Donegal a 2-08 to 2-07 win.

Monaghan then went on to defeat Antrim by two points in the second game.

Fresh from that win Monaghan won the toss and took full advantage of the breeze to open the Donegal defence in, taking point after point.

Goals at the other end from McFadden and the lively Eimear Doherty (Buncrana) kept Donegal in touch.

Donegal did score a third goal with the ball hitting the roof of the net and coming back out.

However, with no umpires provided at U14 county games, the score wasn’t given so Monaghan went in at the break two points up 1-08 to 2-03.

Donegal captain Ashling Mugan (St Eunan’s) chipped in with two fine points to keep Donegal in touch with Monaghan, but the home side lost McFadden through injury and the visitors then added a rather fortunate third goal.

Donegal will have a 6am start this Saturday as they travel all the way to Killean in south Armagh to take on both Armagh (11am) and Fermanagh (noon).