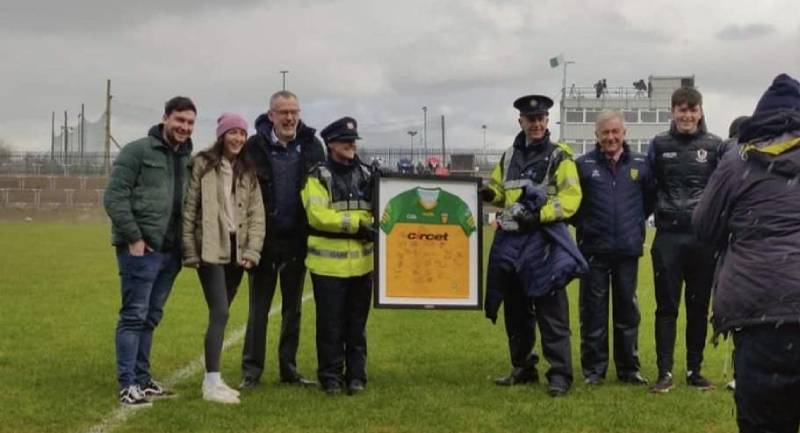 GAA lover Sergeant Lynch to retire after 36 years of service

Sergeant Kevin Lynch was awarded a signed framed Donegal GAA county jersey and a Donegal jacket on his last day on duty at MacCumhaill Park.

Yesterday marked the final time that Sgt. Lynch of Ballybofey Garda Station would don his “Cap” and yellow “Jersey” in MacCumhaill Park in Ballybofey.

Kevin is a native of Longford and is from fine Cavan lineage.  He played football with Longford Slashers growing up and also League of Ireland Soccer with Longford Town.

In April 1986 Kevin Lynch left the gates of Templemore Garda College and arrived in Donegal and never left and has made his adopted county his own.

He has been stationed in Buncrana, Lifford, Letterkenny, Glenties and Ballybofey, earning the respect of his colleagues and the people he policed along the way.

In 2010 Sergeant Lynch arrived in Ballybofey as the only suitable replacement of another GAA legend, Sergeant Terry Reilly, who had just retired.

With his love of sport and the GAA in particular, he immediately took up the mantle as the Garda Liaison with the Sporting Organisations in the Twin Towns.

He forged strong bonds with Donegal GAA and was always on hand to assist in the planning and organisation of some truly memorable matches in MaCumhaill park in the past decade.

He attended all pre-event meetings with Donegal County Board and Ulster Council, even if he was off duty, he always made a point of attending.

Sgt. Lynch would be there hours before and after a big championship game ensuring all patrons got to the game safely, enjoyed their day and got home safely.

His knowledge of and equally his understanding of what is a “GAA supporter” was invaluable and the biggest compliment to Sergeant Lynch is that in the 12 years he has held the role in Ballybofey, every match day ran smoothly and he helped strengthen the bonds of friendship and cooperation between An Garda Siochana and the GAA community in Donegal.

Kevin and his family have been involved for many years with the Letterkenny Gaels GAA and both his sons Ciaran and Finnian both play for the club. Ciaran has represented Donegal at underage level.

An Garda Siochana Donegal and Donegal GAA made a presentation to Kevin and his family after the game against Tyrone yesterday.

Kevin is not retiring for another few weeks but it will be a strange sight on the 24th of April that Kevin won’t be coordinating efforts for the visit of Armagh in the Ulster Championship.

Donegal County Board and An Garda Siochána would like to wish Kevin, his wife Mary, and all his family the very best in retirement and thanked him for his tremendous services over the years.