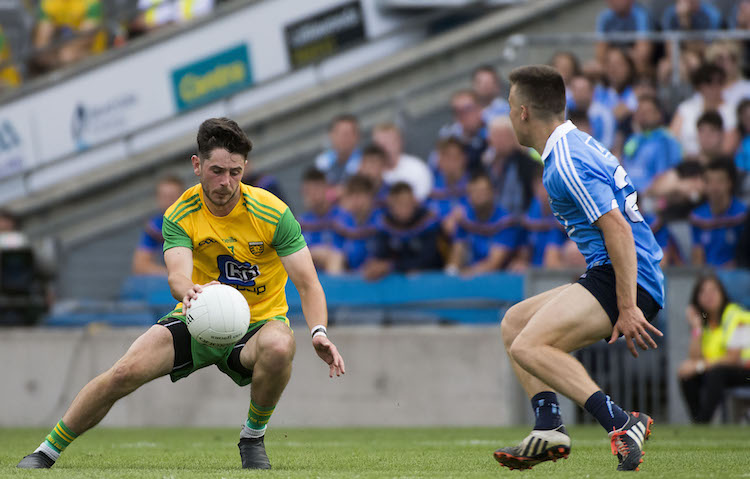 Donegal vs Dublin: A look back on recent league battles

With Donegal not beating Dublin in the league since they won the 2007 National Football League for the first time, the signs look ominous for Sunday’s encounter.

Dublin however, are in danger of relegation, sitting bottom of the table having lost their opening three games and picking up a win in their most recent game against fellow strugglers Tyrone.

Due to Covid-19, the league campaign last year was split into North and South, with Donegal topping their group and facing Dublin in the semi-final.

A battle at Kingspan Breffni Park ensued and the reigning All-Ireland Champions Dublin took time to get going but once they did in the second quarter they never looked back. A Paddy Small goal had Dublin 1-8 to 0-7 ahead at the break.

A late Donegal goal from Eoghan McGettigan made the scoreline look a bit more flattering for Declan Bonner’s side as Dublin shared the Division 1 title with Kerry.

Dublin got the better of Donegal again in 2020 as they came back from 5 points down at one point to win by a single point as both sides ended with 14 men.

Donegal were 1-5 to 2 points up after 20 minutes as Hugh McFadden got the Donegal goal with Michael Murphy and Jamie Brennan getting two points each.

Dublin rallied and brought the deficit to 2 points at half time and a Paul Mannion goal gave Dublin a three point lead with 5 minutes to go. Donegal got it back to a 1 point game but Dublin saw out the victory while Small and Murphy both got second yellows in injury time.

Dublin made it three wins from three in the league as they would go on to become champions while Donegal suffered a tough campaign which saw them relegated to Division 2 at the end of the season, picking up just 1 win and 1 draw.

Two first half goals within a minute from Jason McGee and Ryan McHugh had Donegal 3 points in front.

Jim Gavins side were unbeaten in 32 matches and refused to let the record go as Niall Scully gave Dublin the lead in the second half but both sides retained their records as they shared the spoils.

In the height of Dublin’s dominance, they won every league game this year and defeated Kerry in the final by 11 points.

Donegal vs Dublin: A look back on recent league battles was last modified: March 16th, 2022 by Dáire Bonnar
Facebook0Tweet0LinkedIn0Print0