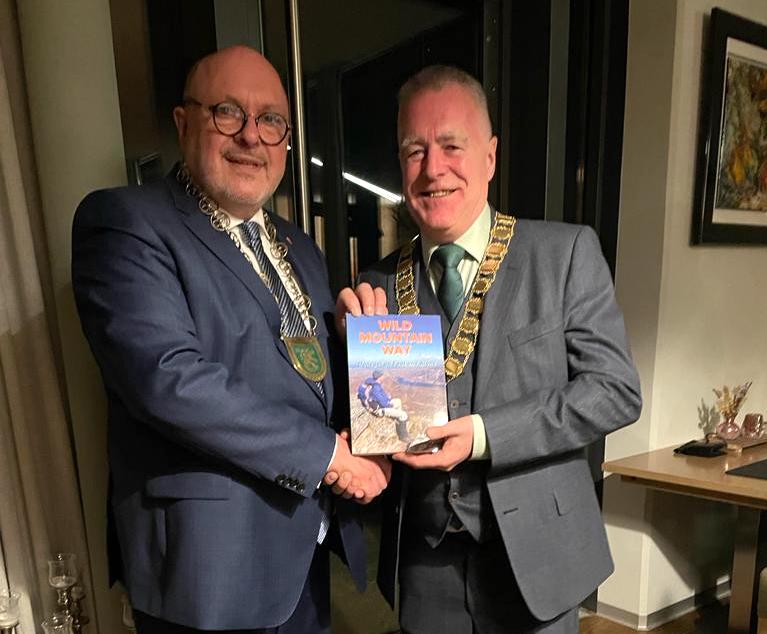 A book about hill walking in Donegal was among gifts presented to the mayor of German city, Rudolstadt, last week.

‘Wild Mountain Way – Donegal on Foot and Alone’ by Adrian Gallagher was given to Jorg Reichl by Mayor of Letterkenny Municipal District, Councillor Jimmy Kavanagh.

This event took place during a visit by a group from Letterkenny for the St. Patrick’s Day celebrations.

Letterkenny has been twinned with the German city since 2018 and groups from Rudolstadt have visited Letterkenny previously.

Mayor Kavanagh said that the book was a great introduction to Donegal and its landscape.

In it, its author, Adrian Gallagher, details his experiences, recollections and reflections on his unique solo four hundred kilometre trek on foot across Donegal, which linked the various mountain ranges of a very mountainous county.

The many colourful pictures in the book give an insight into what can be seen by those who venture out into Donegal’s mountains and hills.

While Donegal’s uplands cannot compare in height to Germany’s Alps, they do have a wonderful unique character, where mountains and seascape combine to give magnificent vistas.

In this book also, we get a flavour of the native Irish language, placenames, local history, geology, geography and much more.

Fifty people from Rudolstadt are to visit Letterkenny in late September and, perhaps, they will have an opportunity to follow some of the routes suggested in the book.

Also among the gifts presented by Cllr Kavanagh was a tweed scarf by McNutts of Downings.