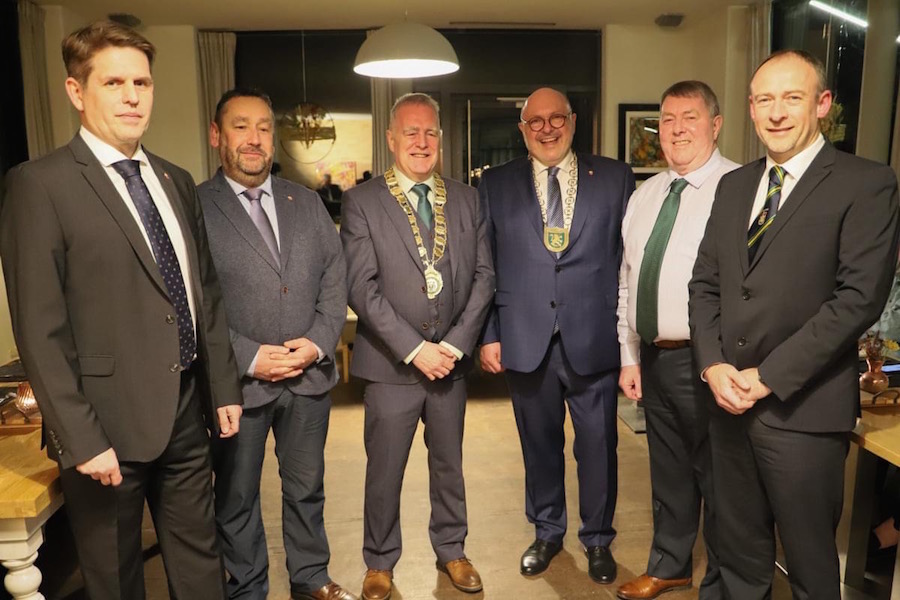 As part of the official twining partnership between Letterkenny and Rudolstadt in Germany, a delegation travelled to meet the Mayor of Rudolstadt, Jörg Reichl.

Meetings took place in relation to strengthening the links between the two regions to include educational partnerships and participate in the St. Patrick’s festival events.

Mayor Jimmy Kavanagh commented, “I was delighted as Mayor along with the Deputy Mayor Cllr. McMonagle and Area Manager Eamonn Brown to lead the Letterkenny delegation on their St.Patrick’s Weekend visit to our twin town Rudolstadt.

“The warmth of the welcome we received from the Mayor Jörg Reichl and all the people of Rudolstadt will stay long in our memory. The St. Patrick’s festival in Rudolstadt is organised by Letterkenny native Karol Kerrane and there was an audience of several thousand in attendance over the weekend, with many of the musicians from Donegal.”

The partnership between the two towns is proving to be a very productive one; over the weekend a further educational link was established between St. Joseph’s NS Rathmullan and a local NS in Rudolstadt, this is in addition to the already existing links with St. Eunan’s and Colaiste Ailigh.

Letterkenny also enjoys regular visits from the Rudolstadt photography club who annually produce a calendar of Donegal photographs for distribution in Rudolstadt.

Mayor Kavanagh added, “We also have links at Rotary club level, and we look forward to establishing further connections and strengthening existing partnerships in the year ahead. A party led by the Mayor of Rudolstadt will bring over fifty delegates to visit Letterkenny in late September for a few days, and we very much look forward to that visit and to the opportunity to return the hospitality we received in Germany.”

Also commenting on the trip, Deputy Mayor, Cllr. Gerry McMonagle added, “It was great to meet with officials from Rudolstadt and see the town and region firsthand. I believe there is a lot to be gained from our partnership and I look forward to building on this trip when we welcome the Rudolstadt delegation to Letterkenny later in the year.”

Letterkenny and Rudolstadt signed the official Town Twinning Agreement back in October 2018 and the Irish tricolour and the flag of Letterkenny were flown at the Rudolstadt Council’s Offices for the duration of the visit to denote the visiting delegates to the town.

Local musician Bri Carr took the opportunity to release her song ‘Dreams of Gold’ in Castle Heidecksburg, a beautiful baroque castle in Rudolstadt, during the St Patrick’s Day Irish Festival in conjunction with IMRO and Letterkenny Irish Pub, Rudolstadt.