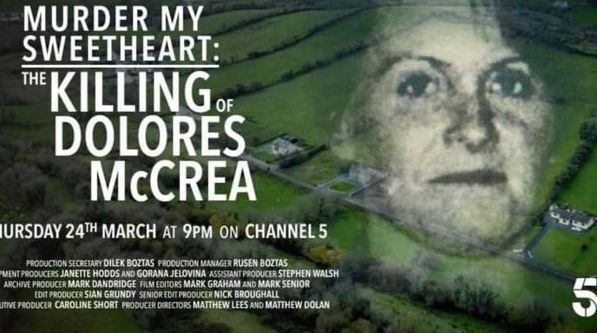 Documentary on horrific murder of Donegal woman to be broadcast tonight

A hard-hitting documentary on the murder of Donegal woman Dolores McCrea is to be broadcast tonight.

The documentary ‘Vanished Without Trace’ will be shown on Channel 5 at 9pm.

Mother of four Dolores disappeared from her home in Laghey which she shared with her four daughters Sharon (17) , Laura (14), Tanya (7) and Leona (5) when she died in January 2004.

The documentary examines the gruesome murder of Dolores which shocked both Donegal and the entire nation at the time.

Dolores’ ex-partner Gary McCrea was jailed for life for murdering his estranged wife and burning her remains at the back of the family home.

It took the jury of nine men and three women took four hours and 37 minutes to find Gary McCrea (40), of Ballybulgan, Laghy, guilty of Dolores’ murder.

After the verdict daughter Sharon McCrea read a brief statement.

“The family and I are relieved that the trial has come to an end and that the jury has returned with a guilty verdict and that justice has been done,” Sharon said. “You must remember that there are two families here that are victims – both the McCreas and the McGrorys.”

“My mother was a wonderful mother, daughter and sister and friend to us all and she will never be forgotten. We want to thank the people of Ballintra who have been there for us since Mammy’s death.”

Documentary on horrific murder of Donegal woman to be broadcast tonight was last modified: March 24th, 2022 by Staff Writer
Facebook0Tweet0LinkedIn0Print0