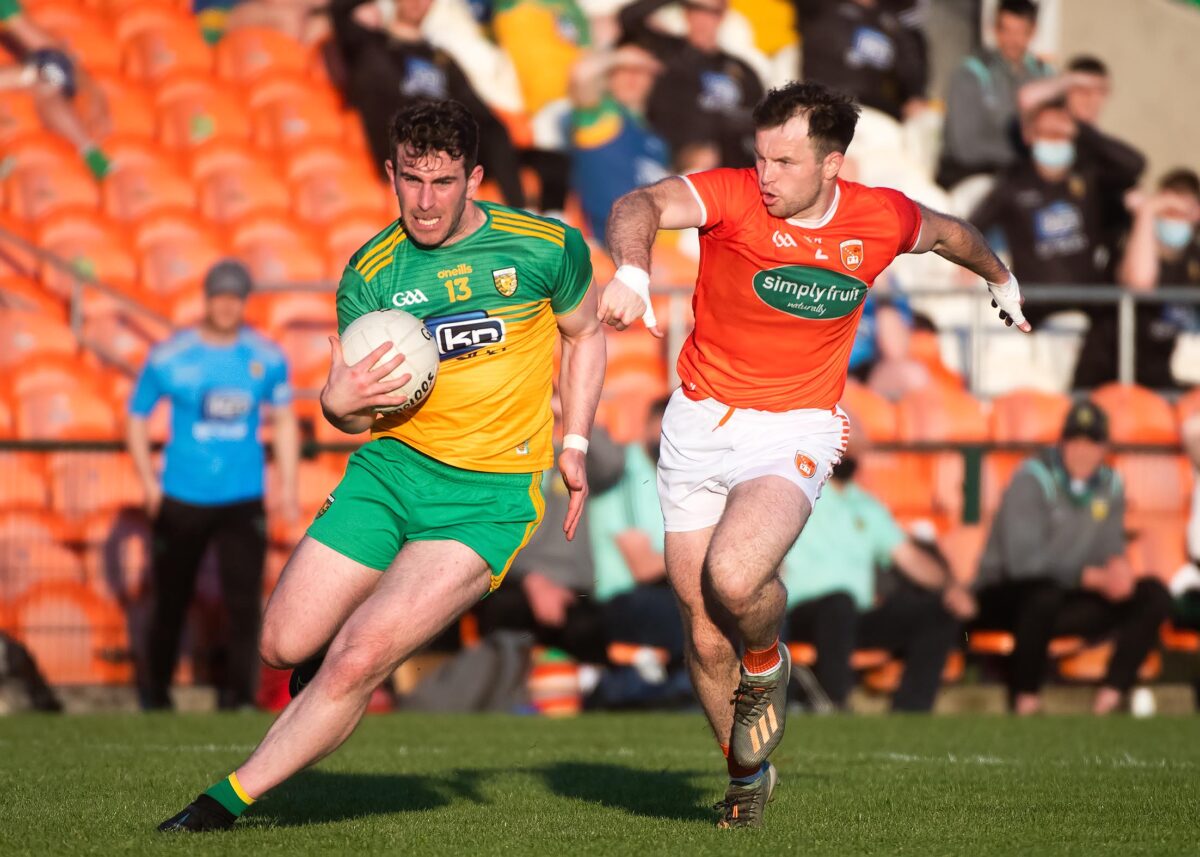 McBrearty wins it for Donegal as they survive in league finale

Donegal made it difficult for themselves but survived late on thanks to a Patrick McBrearty score with the last kick of the game at O’Donnell Park.

In a nail biting second half, in which Donegal were 4 points up with Michael Murphy to take a penalty, Donegal were pegged back and it was level in added time. McBrearty scored the decisive point as Declan Bonner’s side survived while Dublin and Kildare were relegated.

Murphy and McBrearty were at their best once again, combining for a total of 11 points between them, while Jason McGee’s early goal gave Donegal a healthy 5 point lead at half-time, 1-10 to 1-5.

Despite this, Armagh showed their ability and proved they could be dangerous as Aidan Nugent capitalised on a mistake at the back to score the Armagh goal.

The Orchard County also brought on Rian O’Neill and Rory Grugan at half-time which gave them an edge as O’Neill showed his class.

Jason Duffy got the opening score with a mark but straight away Shaun Patton did well with a long kick to Hugh McFadden and the ball made its way to Jamie Brennan who fisted over well.

Murphy used his physical presence to evade a couple tackles and kick a great score while a mark from Brennan made it 0-3 to 0-1.

Aidan Nugent converted a good score in acres of space and converted the 5th point of the game.

Patrick McBrearty scored a mark to score the 6th point of the game after just 10 minutes.

Good play from Jason McGee and Ryan McHugh gave the hosts a goal chance and the former took the chance well to slot past Ethan Rafferty.

For how fast paced the game was early on, it seemed like there was a long wait without a score, but it was just five minutes after the last that McBrearty got his second point of the game.

A first Donegal wide came from McBrearty after 20 minutes from a fast break thanks to a great turnover from Eoghan Ban Gallagher.

Good play from Armagh gave them their first point in over ten minutes through Andrew Murnin but a Murphy free shortly after kept the four point lead.

A couple misplaced passes from either side gave both breaks but when Armagh squandered their chance, Donegal broke and the ball made its way to Caolan Ward for his first point of the game.

Nugent scored another free but McBrearty instantly replied with a mark.

A mistake at the back from Donegal gave Nugent the chance to score and Nugent took the chance well to bring Armagh back in it and a three point game.

Murphy scored a brilliant free and McBrearty also added from a dead ball just before half-time as Donegal went in 1-10 to 1-5 ahead at the break.

Tiarnan Kelly got the opening score straight away in the second half.

Neil McGee came on as a blood sub for Brendan McCole and was yellow carded then quickly subbed back off but got a brilliant reception from the Donegal fans.

Nugent scored from the resulting free and after, Murnin took advantage of a mark to make it 1-12 to 1-8.

Ward and Conor O’Donnell combined and Jamie Brennan raced forward before getting fouled for a penalty.

It was looking good for Donegal with Michael Langan also coming on as Murphy stepped up, but this was a turning point in the game.

Murphy stepped up and hit the penalty wide which almost came instantly back to bite as Connaire Mackin was inches off scoring at the other end, but it went just wide.

Donegal were all over the place as Patton’s kick outs were won by Armagh for three scores in a row, first Nugent fisted over, then substitute Rian O’Neill took a great score and Nugent again pointed to make it a one point game.

Michael Murphy proved his worth as he took defenders away from McBrearty who scored a massively important point for Donegal, their first in over 15 minutes.

However, the classy Rian O’Neill made it look easy for Armagh as he kicked another fine score.

A cagey 10 minutes had everyone in the ground anxious and Rian O’Neill scored a brilliant 45. With Kildare losing and Monaghan and Tyrone winning, it looked like a point would keep Declan Bonner’s side up as they would stay up on head to head with Kildare.

Despite this, Ethan O’Donnell drove forward and McBrearty scored the final score of the game to give Donegal a 1-14 to 1-13 win.

McBrearty wins it for Donegal as they survive in league finale was last modified: March 27th, 2022 by Dáire Bonnar
Facebook0Tweet0LinkedIn0Print0