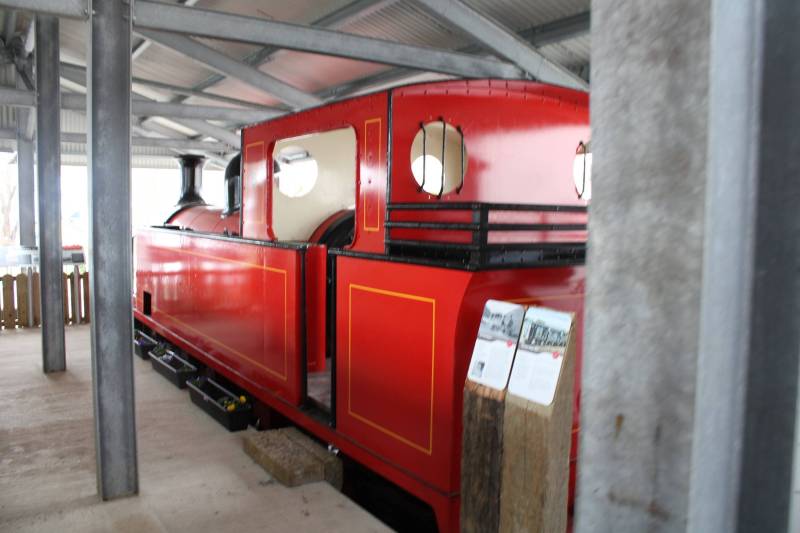 I made two different journeys from the same place this week, a bit like my own version of a local Camino setting out on a Sunday afternoon from the old goods station in Letterkenny.

I was heading out to see one of the old trains that once ran out of Letterkenny years ago from one of the two railway stations in Letterkenny.

It was a one week trip after lockdown on the list to visit the recently restored and returned steam engine that once filled the countryside with steam as it powered its way around Co. Donegal.

That train, once called Glenties, then changed to Drumboe, made a long journey in time to its new permanent home at the Donegal Railway Museum in Donegal Town.

On a Sunday morning, making the journey from Letterkenny to the railway museum in Donegal Town, I followed as near as possible the route that the train would have made between Letterkenny and Donegal by rail. 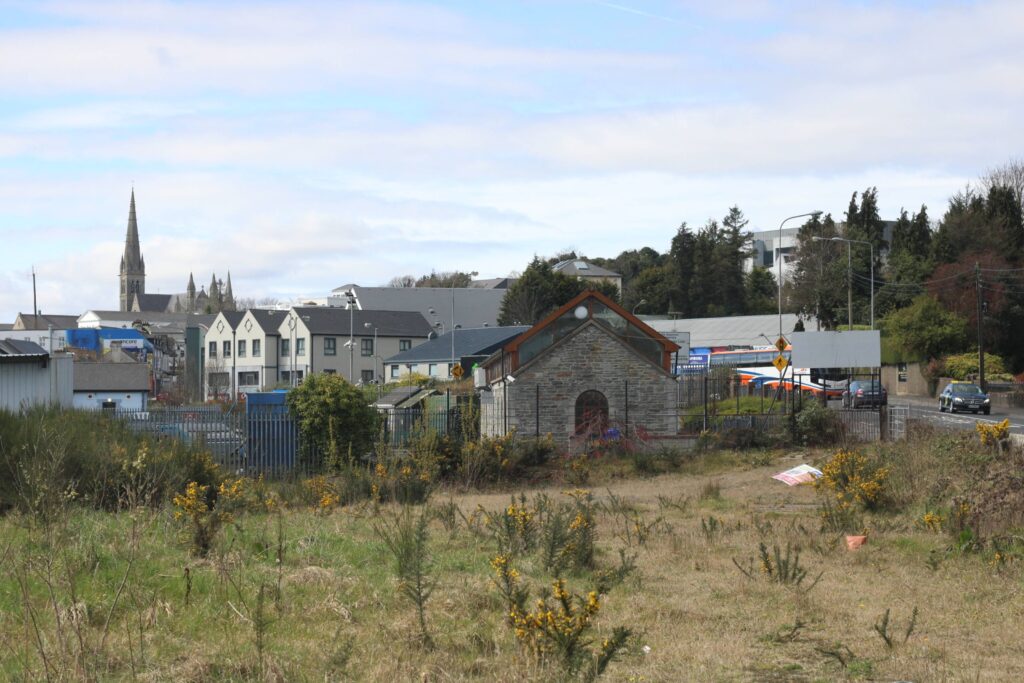 A view of the CDR’s old goods shed in Letterkenny where our road trip began on Sunday morning.
Photo – Brian McDaid

Departing from the old goods shed in Letterkenny at 12.36 am went in search of landmarks from the old County Donegal Railway (CDR) line easing out of Letterkenny up Lurgybrack before turning down the Convoy Rd. stopping off at the old Glenmaquinn Station at 12.47. 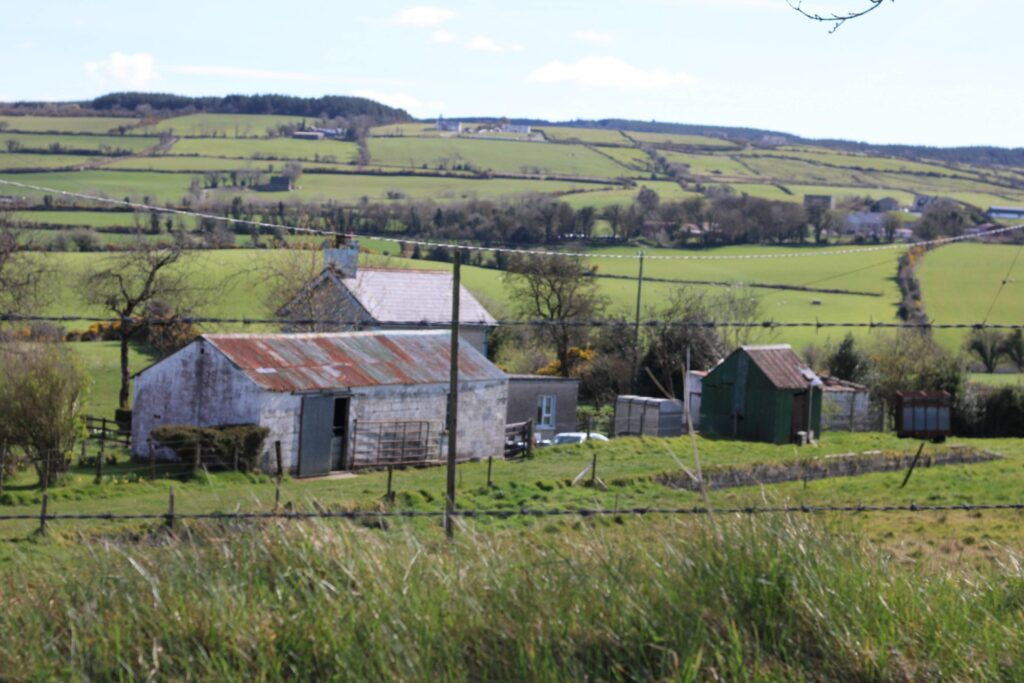 We head on in the direction of Convoy and pass by the gatehouse in Convoy at three minutes to one. From there we follow the track on a back road between Convoy and Raphoe passing under a lovely old railway bridge at 1.03PM. 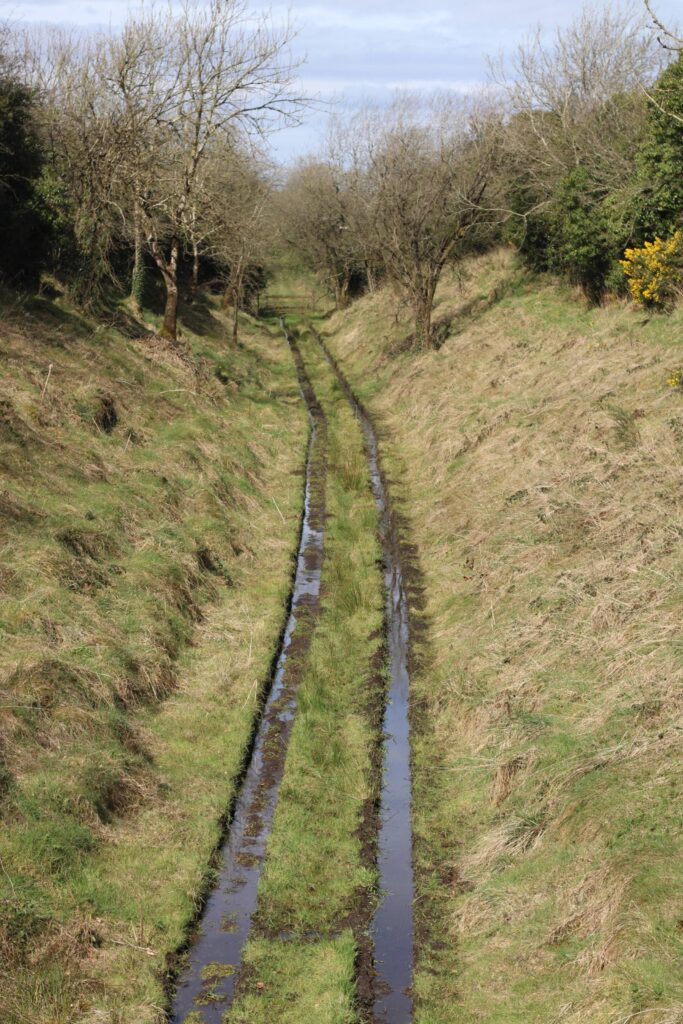 The old railway track that runs under the road bridge at Glenmaqunn. 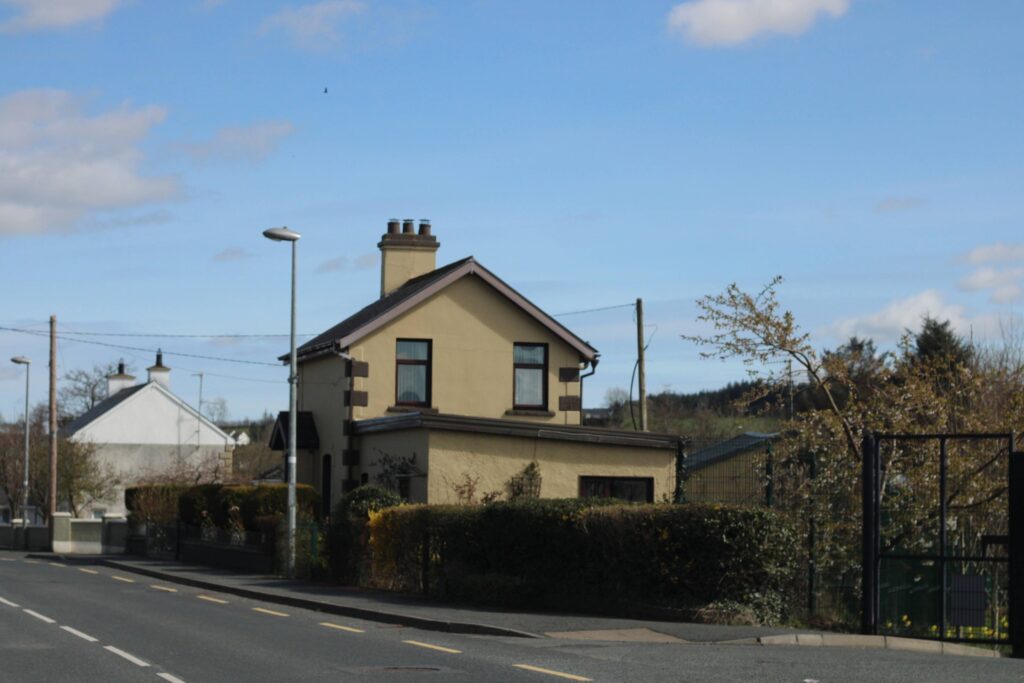 The station gate house in Convoy.

From there it’s on through Raphoe and heading in the direction of Lifford where you can see where the train ran parallel with the road for a few miles. Along this stretch, two old railway gates can be seen along the road side. 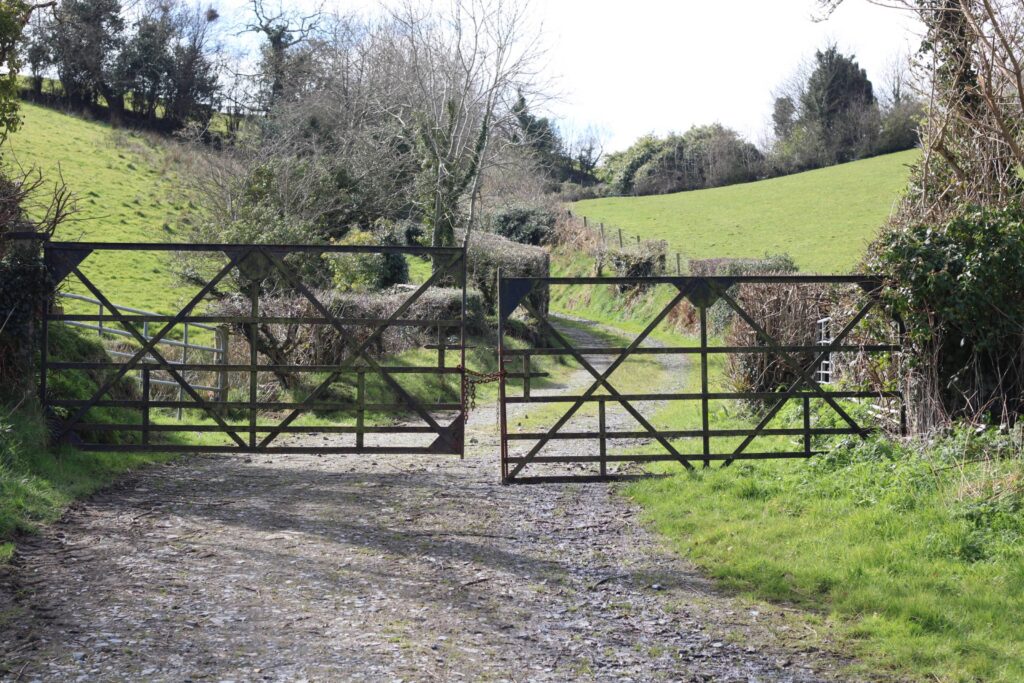 Old railway gates still in used along the old railway track between Raphoe and Ballindrait.

And when I pass this part of the old railway I think of the late Mick Gallen who once drove the railcar along the line. I always remember Mick talking about the railway laying new tracks just a year before the line closed for good. 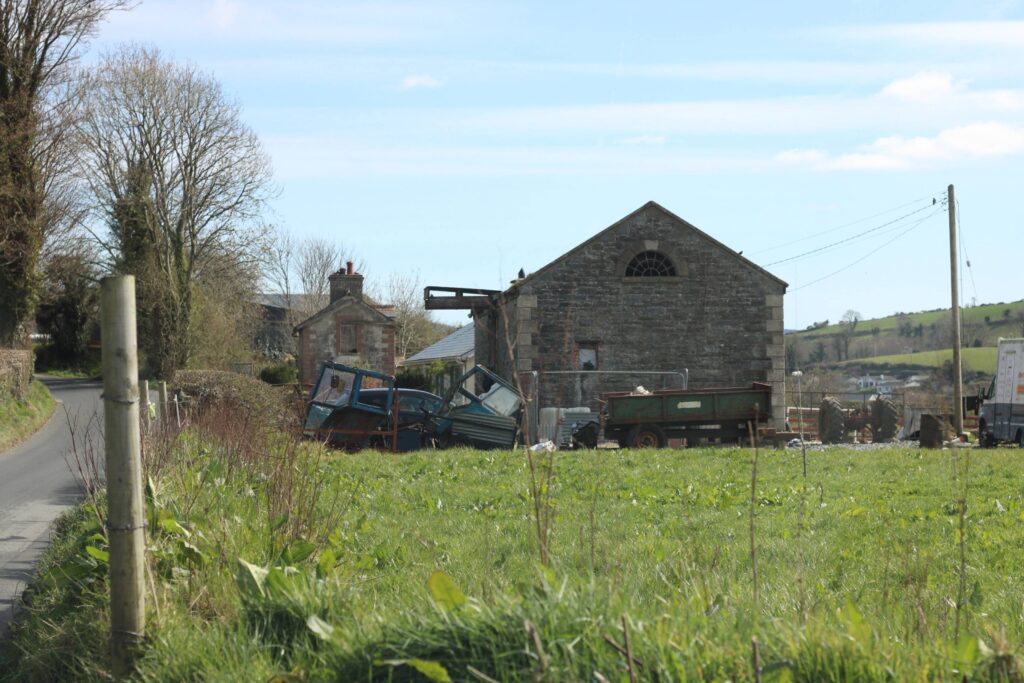 The goods shed and station house in Ballindrait.

We now arrive at the old station on good yard at Ballindrait at 1.15PM from there it’s just a short journey to Lifford Station at 1.22PM before the CDR train crosses over the river and into Northern Ireland to Strabane. 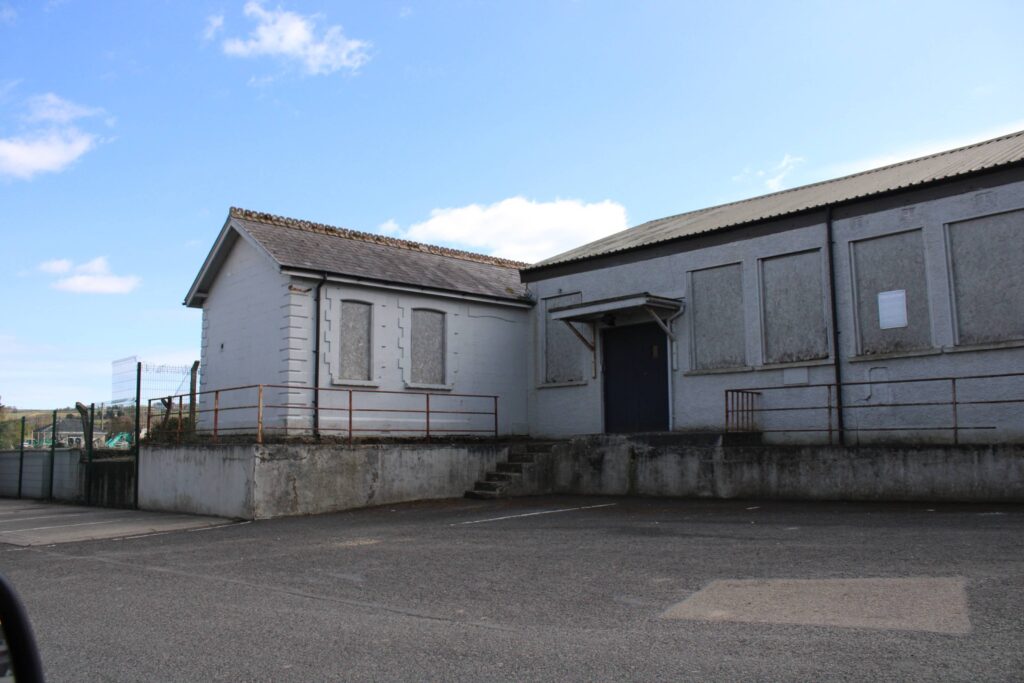 Lifford station before the railway crosses the border into Strabane.

From Strabane we head in the direction of Stranorlar, this section of track is the oldest part of County Donegal Railway and originally was wider gauge before it was changed to narrow gauge. Traces of the line can be seen just before arriving in Castlefin where the customs were stationed. 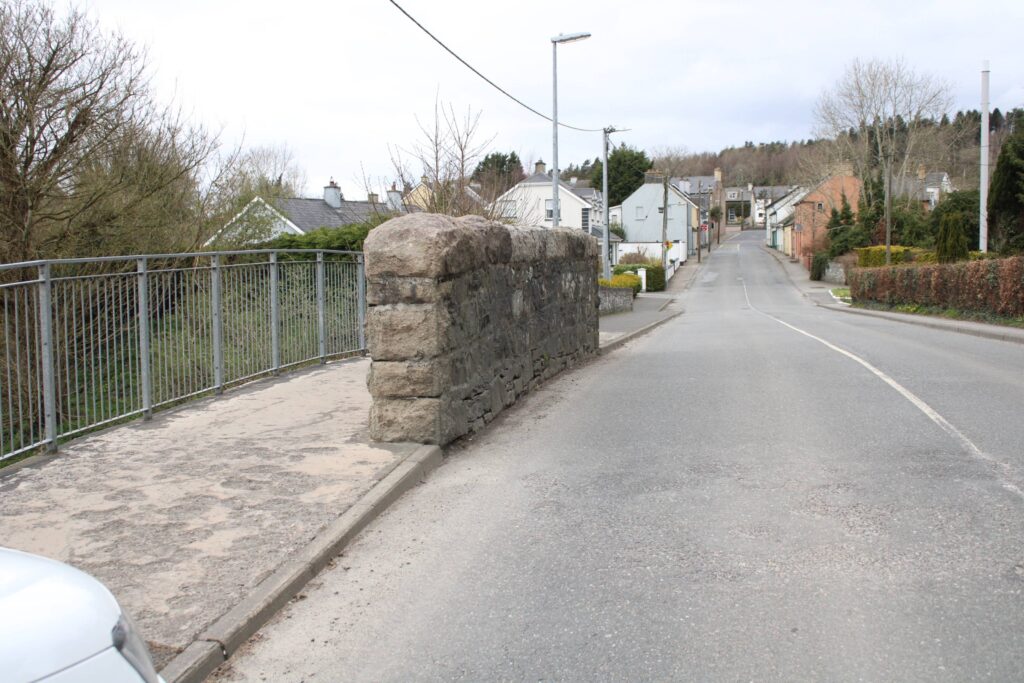 The wall of the old railway bridge in Killygordon.

From there we head on to Killygordon Station, arriving at there 1.51pm where the wall of the bridge between the road and footpath mark the shop where the train passed underneath heading to the CDR Headquarters in Stranorlar, arriving where the old blue nameplate and clock mark at the boundary where the impressive station once stood. 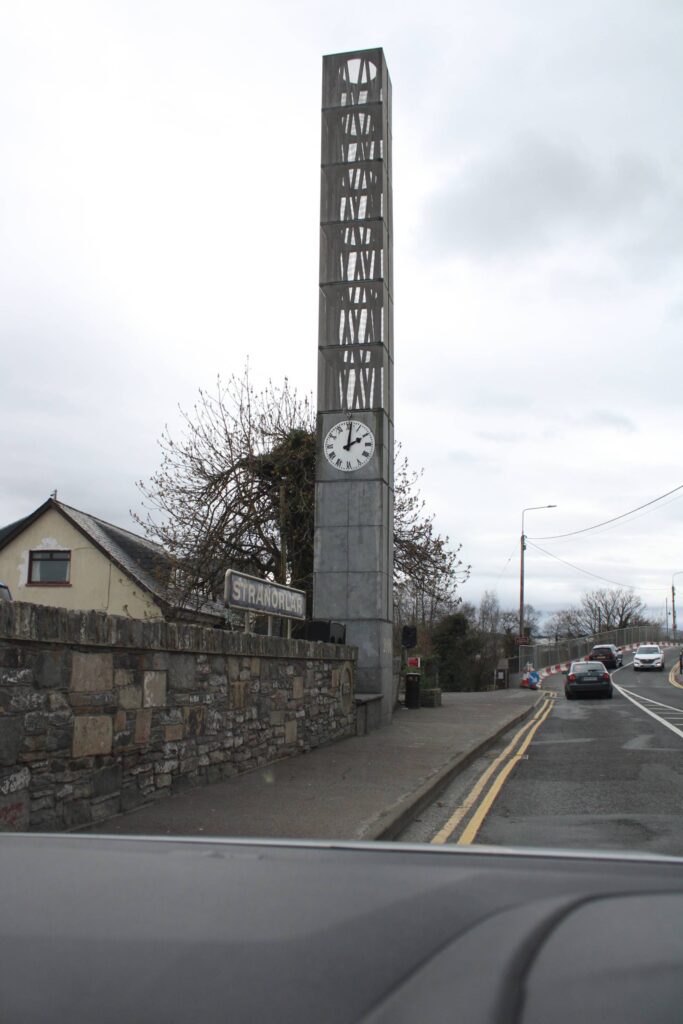 The clock and old blue Station sign where the CDR’s main station once stood in Stranorlar.

The clock is three minutes fast according to our time of 1.58pm as we head in the direction of Donegal and through the gap to Donegal Town. The gap is where most people think of the old Donegal train as it made its way through high up on the hill side. 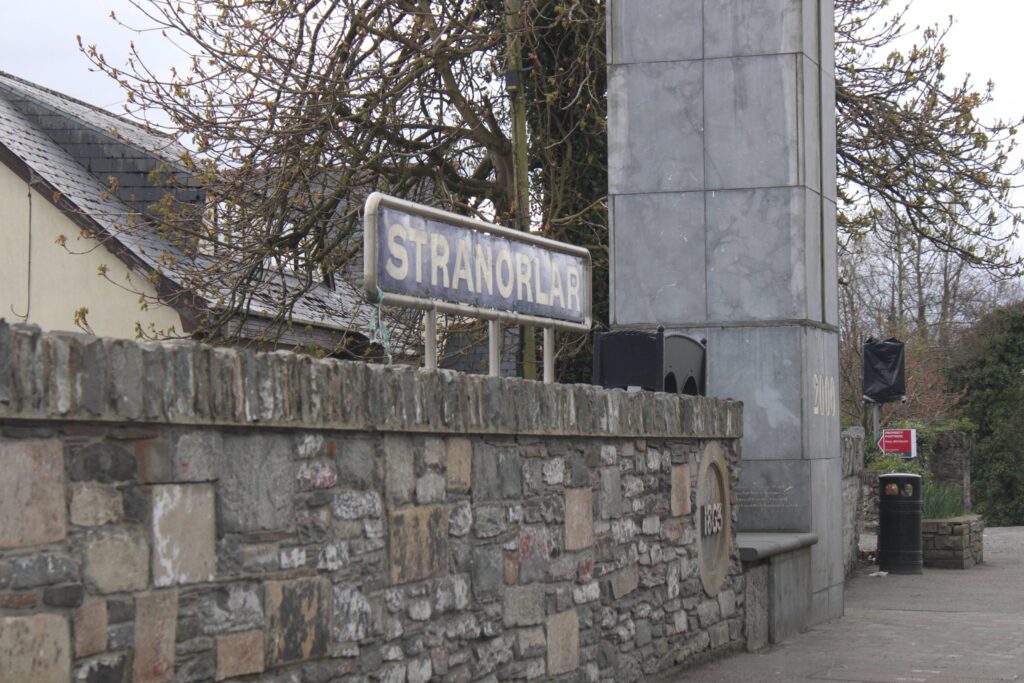 The clock and old blue Station sign where the CDR main station once stood in Stranorlar.

We will soon be arriving at our destination shortly in Donegal Town as the railway line crosses under what once was the old road at Clar Chapel before finally making its way into Donegal station. 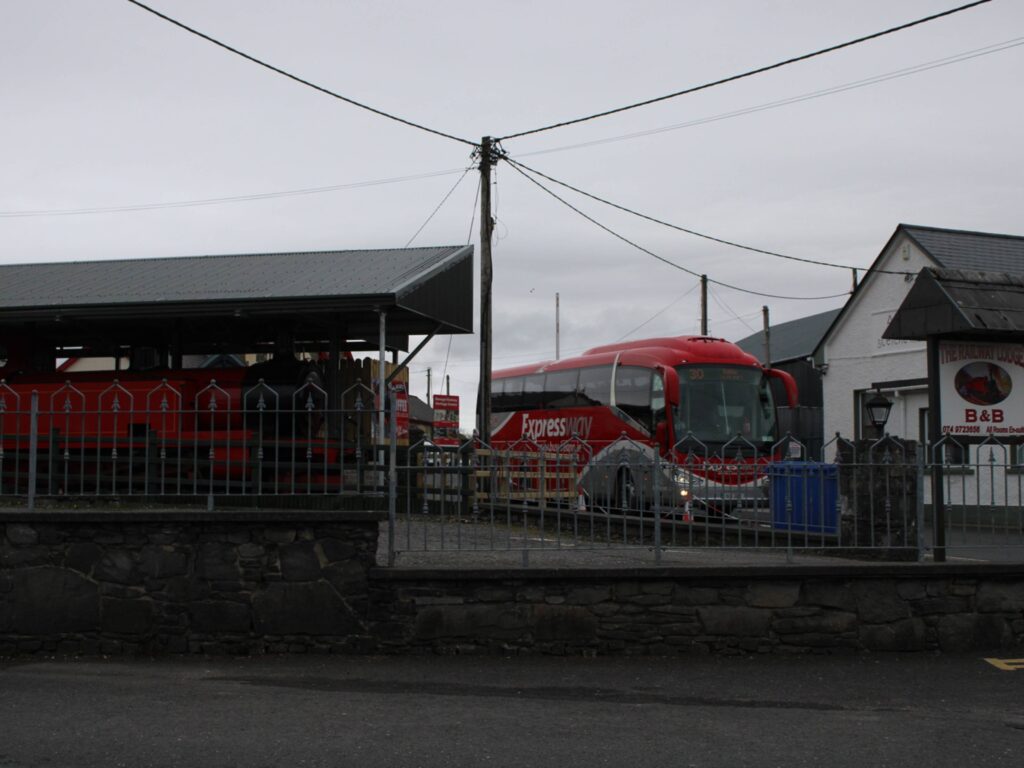 As we arrived at the Museum at 3.24pm, the Donegal to Dublin Express was just pulling out from the Bus Eireann Station.

It’s lovely to catch the express as it passes by Drumboe, a part of Donegal transport History sitting at the entrance to the museum.

Drumboe is just beautiful, sitting on rails surrounded with a few passenger and goods carriages. 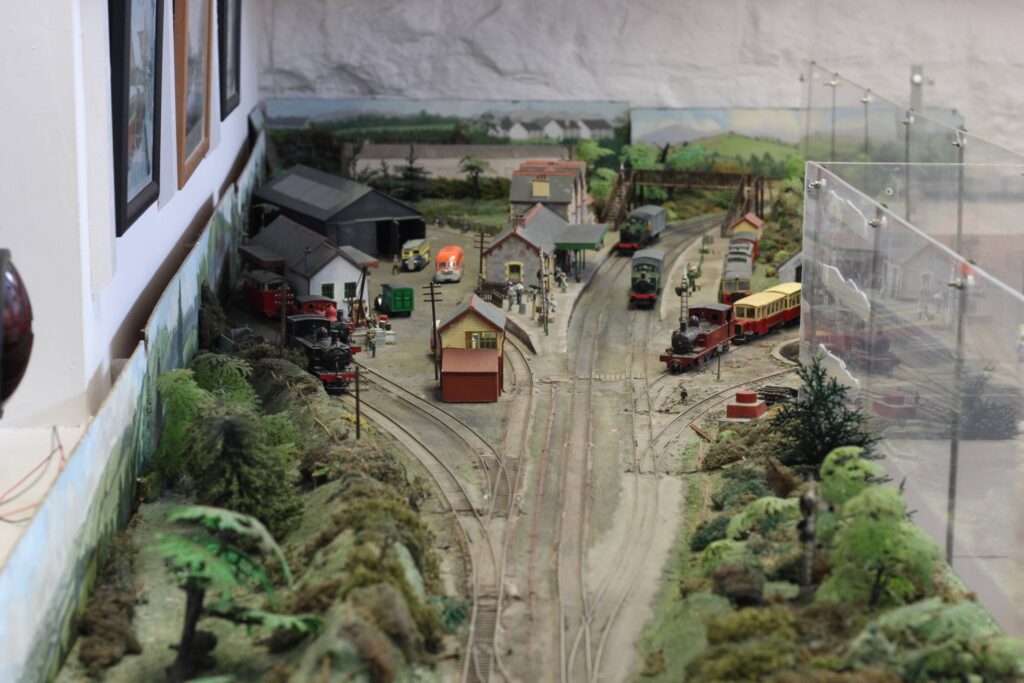 A scaled model of Donegal Town Station at the museum.

The museum has a 50 minute film showing footage taken in colour in the final years of the railway in late 1950’s, mostly from one of the railcars on journeys from Donegal to Killybegs and Donegal Town to Stranorlar. 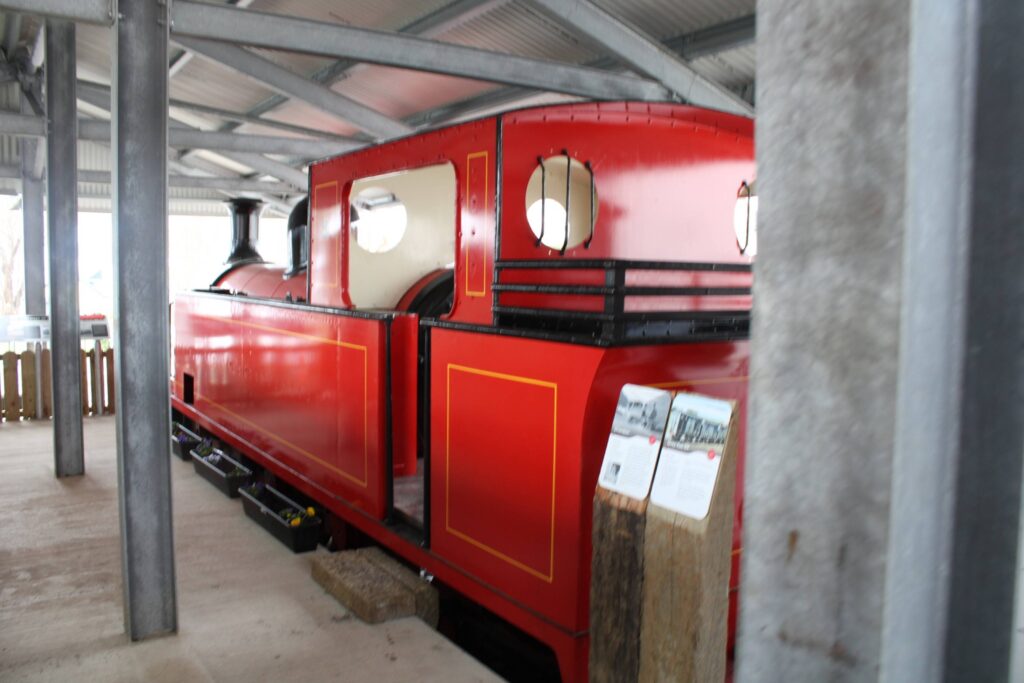 Drumboe in all its glory at the railway museum in Donegal Town.

Museum curator Heike was on hand to give a great tour of all the memorabilia on show at the museum, including two fine scaled model railways of Killybegs and Donegal Town Railway Station. 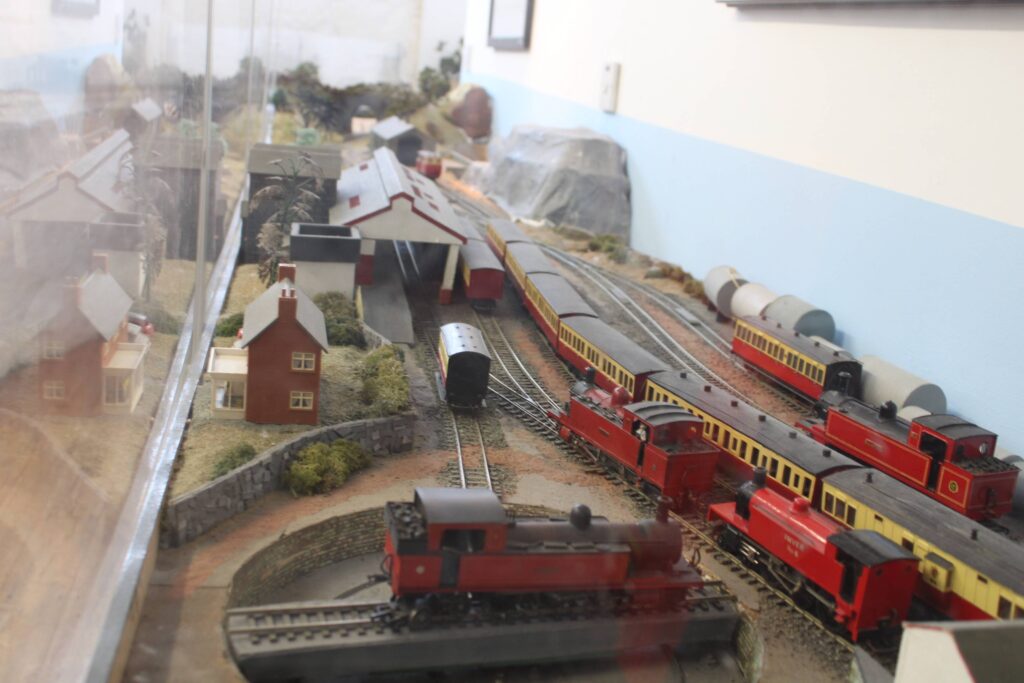 What Killybegs Station would have looked like in its day on show at the museum.

And as the museum closed up for the evening I still had another part of my old railway line to visit. Heading out of Donegal town I once again pick up the old railway line on the left as the main road bypassed the village of Laghy, a few gate houses and high bridges mark the line as it heads south. 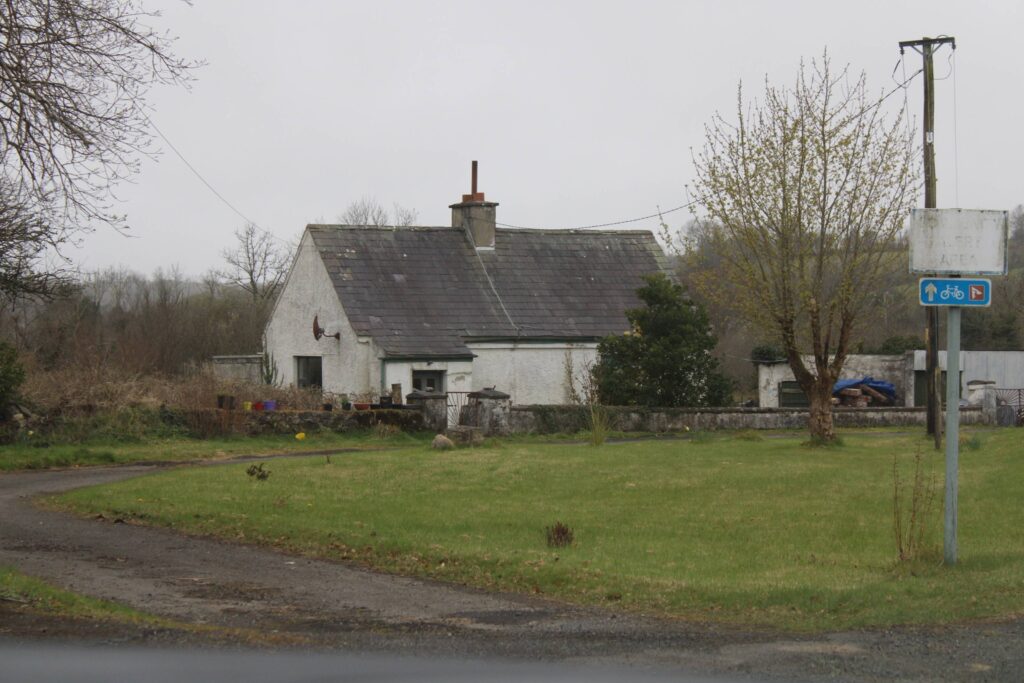 One of the beautiful old gate houses near Laghy.

The railway would pass all the villages along that route before it heads for the sea at Rossnowlagh before it makes its way to the end of this section of line at Ballyshannon Station House which we arrived at at 4.20pm. The journey by road along the track was around 110 kilometres, or just under 70 miles. 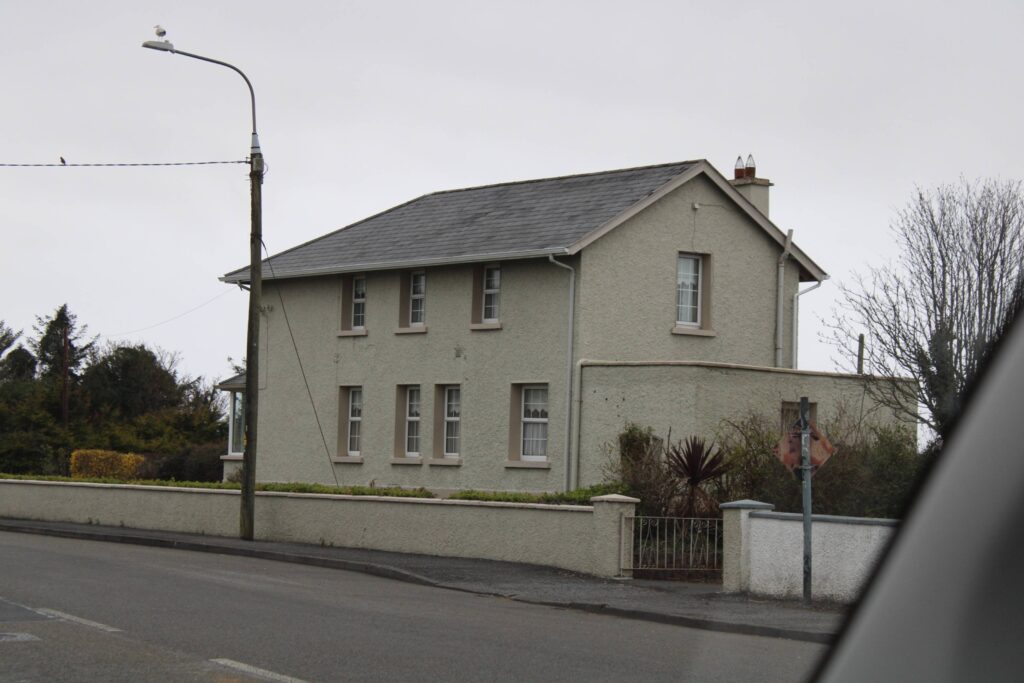 The old Station house in Ballyshannon.

It was a journey, or parts of a journey that Drumboe would have made in its lifetime on the railway.

As I am looking into what once was the station yard in Ballyshannon, which now houses the headquarters for the Ambulance Control for all of Donegal and before that was where the Donegal Democrat was printed every Thursday. 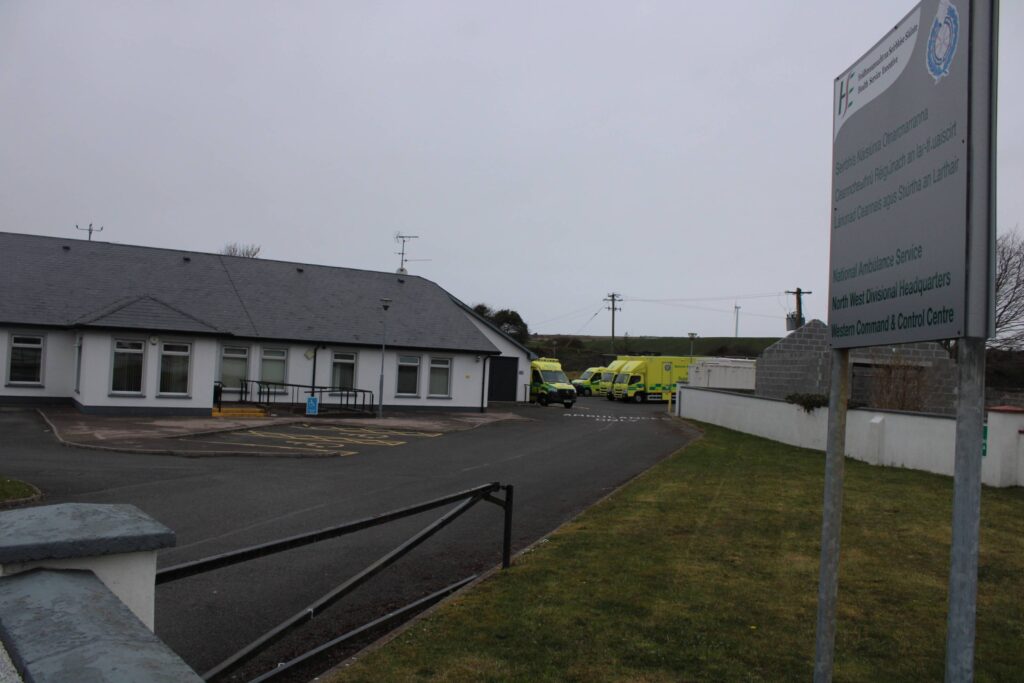 The old station yard in Ballyshannon once the home of the Donegal Democrat now the control centre for the Ambulance Service in Donegal.

It was our headquarters where I would head every Thursday to get the weekly paper and load them into the back of a twin cam Toyota Corolla in the late 1980s and bring them to the bus station in Letterkenny where old Swilly busses would be waiting to take the weekly printed news on its onward journey.

History is kind of repeating itself over the weekend with the news that the Donegal Democrat Group have moved from Larkin House in Letterkenny to their new offices in the old CDR goods shed just off that station roundabout.

The platforms may have changed from catering for trains to a platform to cater for the digital needs to transmit the news over the web. 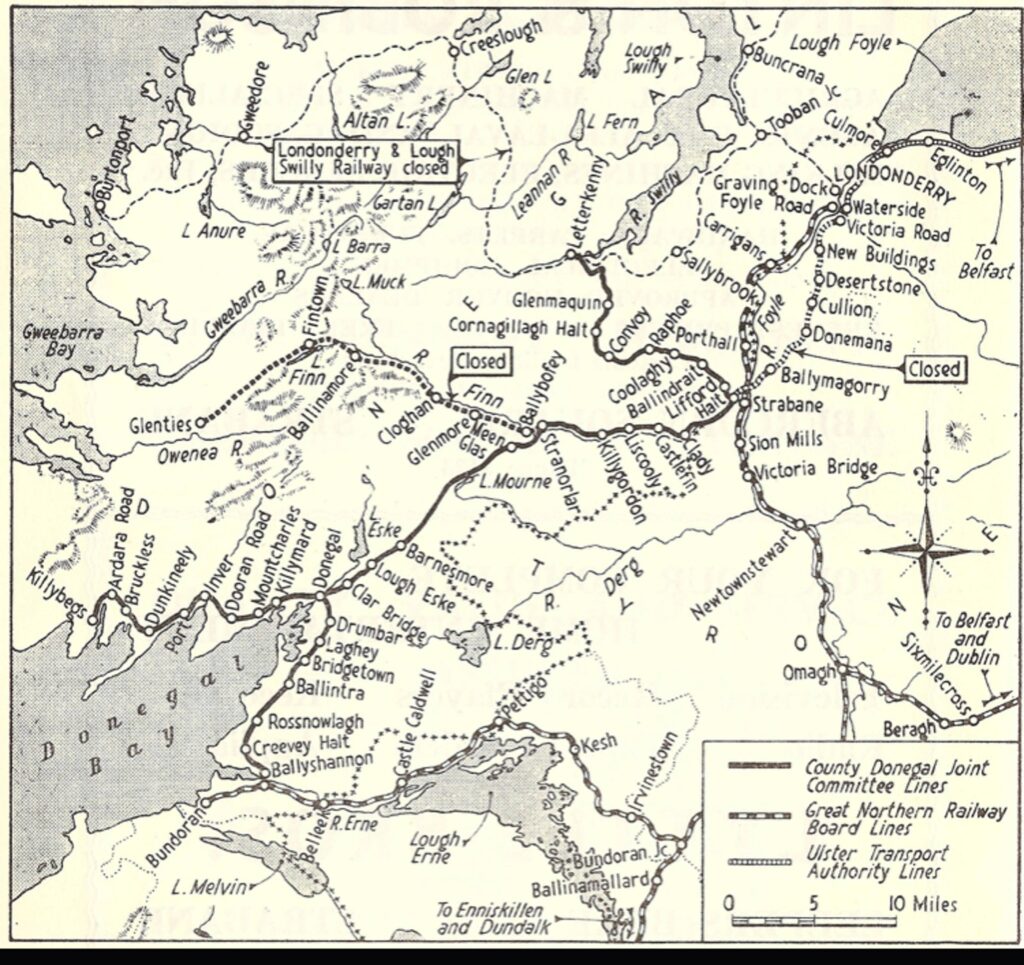 A view of the network of the CDR railway in Donegal Town.

This week I sent in a few photos from a news item I was covering in Letterkenny at the weekend.

It’s 36 years after my first pictures were used in the publication the Donegal Democrat and this week it was the first new item that I worked on that was produced in the old CDR goods shed which was refurbished a good few years ago and is now called the The Station House.

Working in phone and broadband lines to receive and send news compared to the old lines that once covered Donegal.

Drumboe and the museum is a great day out for a visit but it’s all good getting there, but finding these old landmarks along the way are as much a part of the history of travel in Donegal.