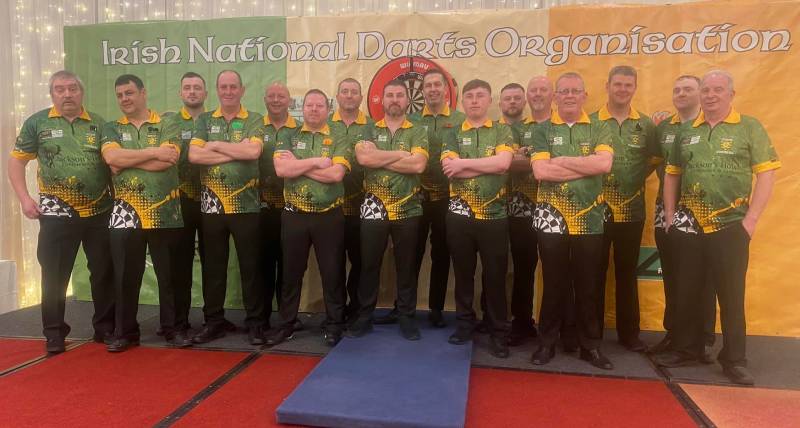 The 2022 Inter Counties All-Ireland Darts were held this past weekend at the Knightsbrook hotel in Trim, Co. Meath.

There was great excitement to finally get back to the darts after the missed year due to covid. It was to be a very open competition this year with everyone missing out on in-person opponent practice and some leagues yet to be up and running.

The Donegal men travelled to Meath on Friday to defend their title from 2020. A fine squad of men were ready to rock and were well fired up for the competition.

The darts were throwing early on Saturday starting at 11am. They had Offaly and Monaghan in their group so an early lead was needed. Offaly were All Ireland champs only a couple of years ago and were tough competitors.

But the Donegal men started and continued strong and with a nice 8-5 win. Offaly met Monaghan next where they beat them 10-3. It meant that Donegal needed at least 7 points to top the group against Monaghan. The men did that and more winning 8-5 to top our group.

The darts kicked off on Sunday at 11.30am and the tension was sky high in the room. This was a knockout format and every game inched us closer to retaining the title.

The supporters were crammed in like sardines trying to see the boards, some having to jump up on chairs to get a better view.

Donegal faced Carlow in their 1st match which was now down to the last 16. The men threw fantastic darts and were elated with a 7-1 win which seen them into the quarter final next against Dublin.

They had barely an hour break to regroup and get ready before the next run of darts were thrown. It was here that Dublin got the early lead and took off with a 6-0 lead. The Donegal heads were low knowing that the dream of retaining the title for 2022 was getting further away.

The heads lifted when Charlie grant won the first match of this battle for Donegal making it 6-1 and giving the team some hope. The crowd got behind John Flood roaring words of encouragement to get the next win with a fine 123, bull finish making it that bit closer at 6-2.

Gerard Porter was next up and his kids alone drowned the crowd out with shouts of encouragement. He got the win and made it 6-3. But that was to be the last win for Donegal as Dublin got the last leg to make it 7-3 and earned their place in the semi-final.

The Donegal men did themselves and their county proud, it just wasn’t to be this year. Another year of normal darts will see them back, bigger, better and stronger, ready to rock for 2023!

The Donegal ladies were drawn into a group of 4. The other teams being Kilkenny, Limerick and Wexford who were reigning all Ireland champions. 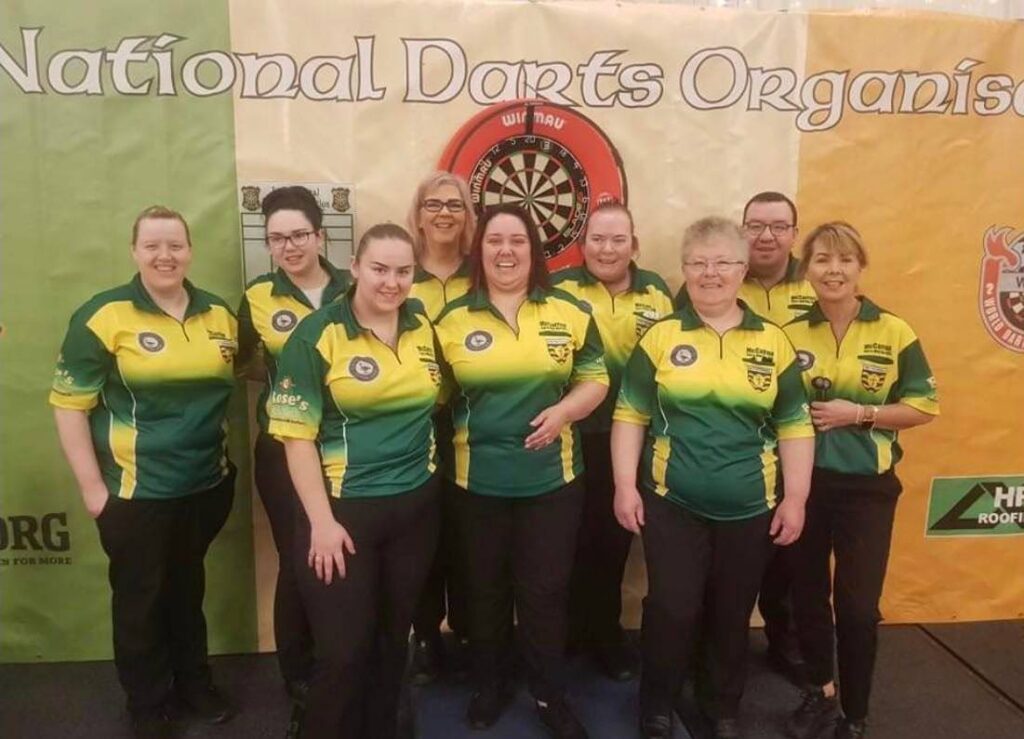 The ladies had their first game on Saturday morning as they faced Kilkenny, winning the game 5-2, with wins coming from Trish Kelly, Geraldine Harkin, Amanda McCarron and Amy and Sharon Cunningham.

In the next game Donegal faced Wexford and narrowly missed out on a win by a score of 4-3, with wins coming from Sharon Cunningham, Geraldine Harkin and Amanda McCarron. The last game of the groups was against Limerick. Donegal got a 4-3 victory with wins from Marie shields, Sharon Cunningham, Geraldine Harkin and Amanda McCarron. They finished the group in 2nd place landing their place in the All Ireland quarter-final on the Sunday.

On Sunday, Donegal went to head to head with county Laois. A bad start seen the Ladies down 3-0. But Donegal rallied the troops and brought the score back to 3-3 with a real fight for the finish. Unfortunately the darts didn’t go their way in the last game and Laois took the victory.

The Ladies did themselves proud with some outstanding darts played all weekend. All in all, a great weekend for the ladies who finished off once again in the championship where they belong.