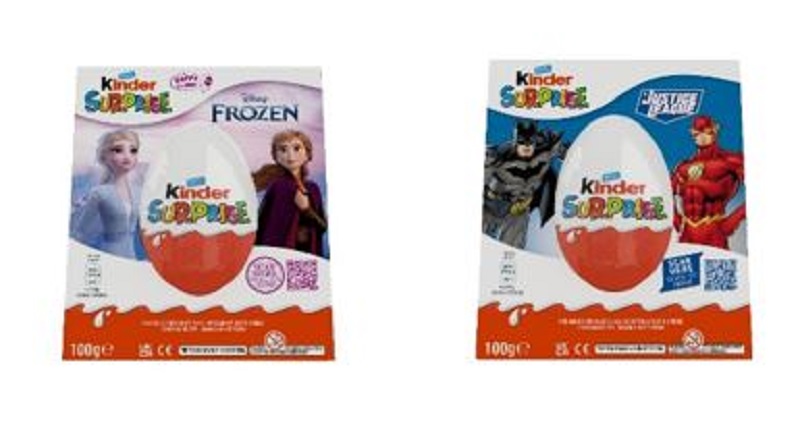 ANOTHER food alert has been issued during an extensive outbreak of salmonellosis in Europe linked to the popular Kinder chocolate products.

There are now 15 cases of salmonella reported in Ireland – most involving young children.

The Food Safety Authority of Ireland (FSAI) is today recalling all implicated Kinder products irrespective of best by date. All parents and carers of young children are being advised to make sure that they do not have the following Kinder Egg products at home:

Consumers are advised not to eat the implicated batches. Instead, please contact the Ferrero consumer careline on +44 (0)330 053 8943 or email consumers.ireland@ferrero.com.

The HSE, HPSC and FSAI have been working closely with UK authorities to investigate an outbreak of Salmonella Typhimurium. The Irish outbreak is part of a larger outbreak that involves the UK and a number of other European countries.  The great majority of people who have become ill in this wider outbreak, have reported eating Kinder products (manufactured by Ferrero) in the days before they became unwell.

Since the end of January, 15 cases of salmonellosis which form part of this outbreak have been identified in Ireland, primarily in children.  The most recent Irish cases became unwell in mid-March.

Dr Paul McKeown, Specialist in Public Health Medicine at the HSE-HPSC, said: “Although there has been a speedy recall of these products, we may see a number of further cases of illness associated with this outbreak. However, the likelihood of any individual child becoming sick as a result of eating this product is extremely low. Only a very small percentage of children who have eaten this product over the last few weeks has developed salmonella infection. The symptoms of salmonella infection in children (nausea and vomiting, abdominal cramps, diarrhoea) are mild in the majority of cases, and can be managed at home.”

He went on to say: “If your child develops more worrying symptoms such as a lot of diarrhoea, diarrhoea with blood in it, a lot of vomiting, a high temperature or a nasty headache, you should seek medical advice from your GP. It is important to remember that the majority of children who develop vomiting and diarrhoea are unlikely to have salmonella infection, and are more likely to have a simple viral tummy upset, which can be treated simply with paracetamol and fluids by mouth.”

“The FSAI have online images  of the affected products. If you have bought any of these products, do not eat them, and do not give them as Easter presents. Instead, please contact the Ferrero consumer careline on +44 (0)330 053 8943 or email consumers.ireland@ferrero.com.”