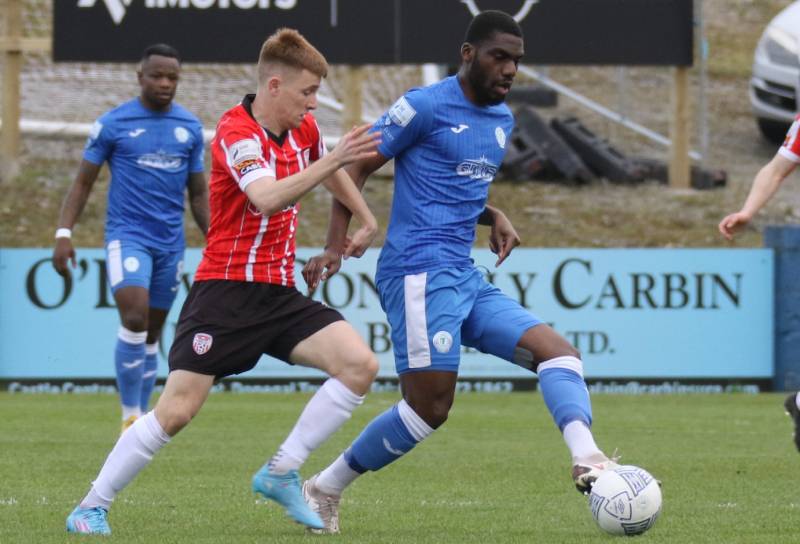 Finn Harps suffered defeat in the first North West Derby of 2022 as they lost 2-1 to Premier Division league leaders Derry City at a sunny Finn Park.

Cameron McJannett gave Derry the lead after 23 minutes with chances few and far between.

Ryan Rainey had a shot go just wide in the second half and minutes later David Webster hit the crossbar from a header while Derry went on to extend their lead with minutes to go.

Will Patching scored another free-kick at Finn Park as the game looked done and dusted but substitute Filip Mihaljević scored an added time penalty to give Harps some hope of a comeback but the equaliser wouldn’t come. 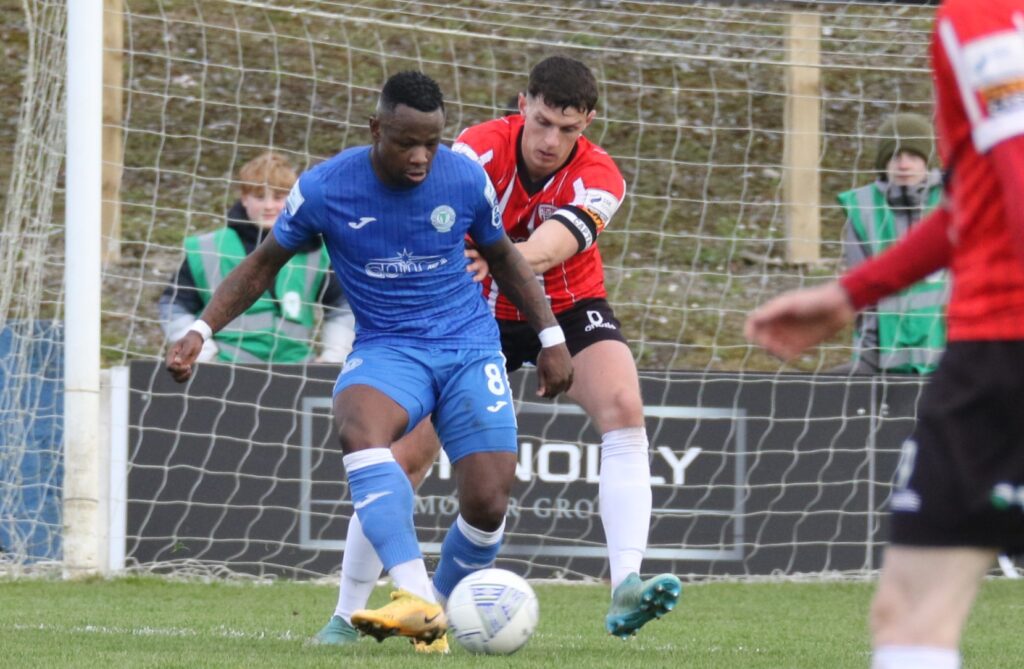 Harps came into the game hoping to get back to winning ways after conceding a late equaliser at home to Drogheda United on Monday night in the rescheduled opening game that was called off.

After last nights results in which Drogheda scored late on to draw with Bohemians, Ollie Horgan’s side are now three points off Drogheda and Shelbourne as they sit in 9th place on six points, occupying the relegation play-off spot.

Meanwhile, a late Shamrock Rovers win moved them to three points of Derry again but having played a game more.

It was never going to be an easy task for Ollie Horgan’s side and that was proven from the off. 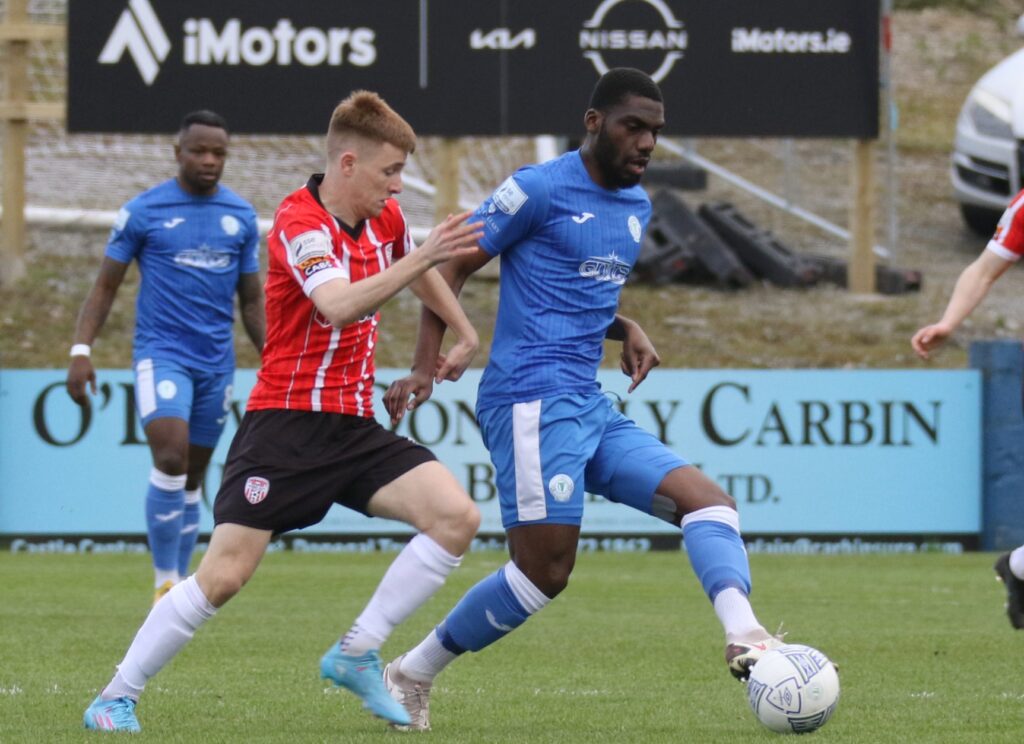 Both teams threatened early as Brandon Kavanagh had a dangerous cross cleared and after Derry won a corner, Harps countered quickly as Elie Gaël N’Zeyi played a ball over the to for Barry McNamee with Eric McWoods in support but Derry tracked back quick to turn it out for a corner.

Derry enjoyed success with multiple attacks down the left but they were consistently defended well by the Finn Harps defence and McGinley held a couple while Ethan Boyle’s cross after 10 minutes was headed towards goal by McWoods but Brian Maher saved easy.

On the 20 minute mark a Will Patching cross was headed clear by Conor Tourish only to Lafferty and his shot outside the box was tipped over by McGinley. 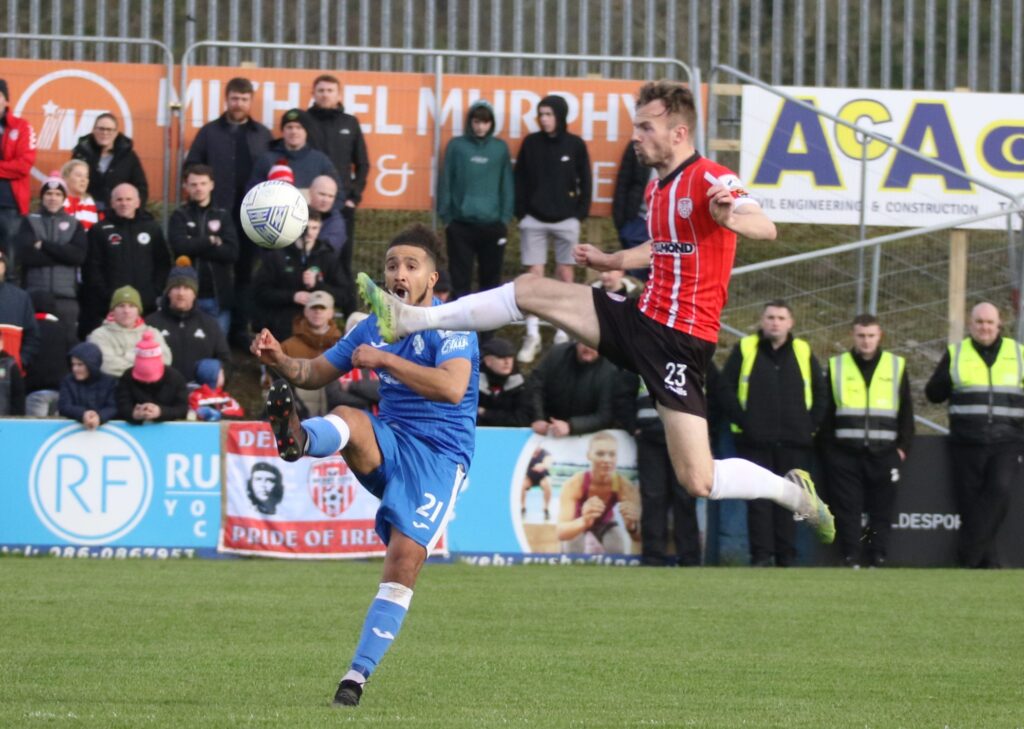 Derry got the opener from the resulting corner as Kavanaghs delivery was headed in by Cameron McJannett.

Harps instantly tried to respond as Ryan Rainey and Boyle linked up down the right wing and the low cross was fired over by Yoyo Mahdy.

Another Derry corner headed clear by N’Zeyi only to Patching but his effort went just wide while his next effort from a dangerous free kick was straight into the wall, the next Derry corner to the back post was hit just wide by Lafferty again as Harps couldn’t deal with Derrys aerial threat.

A well worked Harps free fell to Webster on the edge of the box and hit shot went just wide and just past the toe of Mahdy who couldn’t direct it towards goal.

Mahdy and McWoods linked up well but Raineys cross amounted to nothing as Harps went into half-time trailing 1-0. 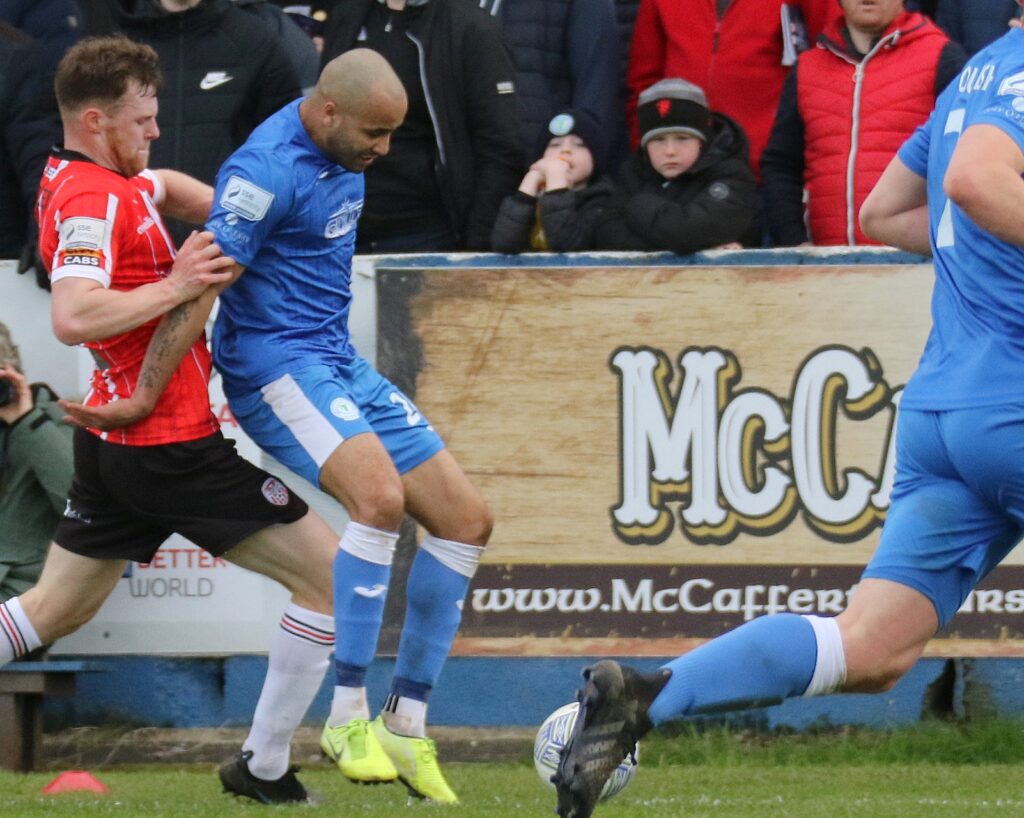 Derry continued to threaten from Kavanagh set-pieces as his free-kick to the near post was flicked on by Shane McEleney and the ex-Harps man almost scored but his header went just wide of the far post.

Harps attacked through McWoods and won a couple of corners but they failed to threaten from them in the same way as their opponents.

However, the trademark Ethan Boyle long throw caused havoc once again and it led to Finn Harps’ two best chances of the game.

The first one fell to substitute Luke Rudden and after a short scramble, the ball fell to Rainey but his shot went just wide.

Two minutes later his next throw was launched in and cleared but McNamee floated the ball back in and Webster, with his back to goal, headed the ball on to the crossbar and over for a goal kick.

With just over five minutes to go, another throw in from Boyle was headed out only to McNamee and the Ramelton mans goal bound shot was well blocked by a seas of red as Derry looked content on defending their lead. 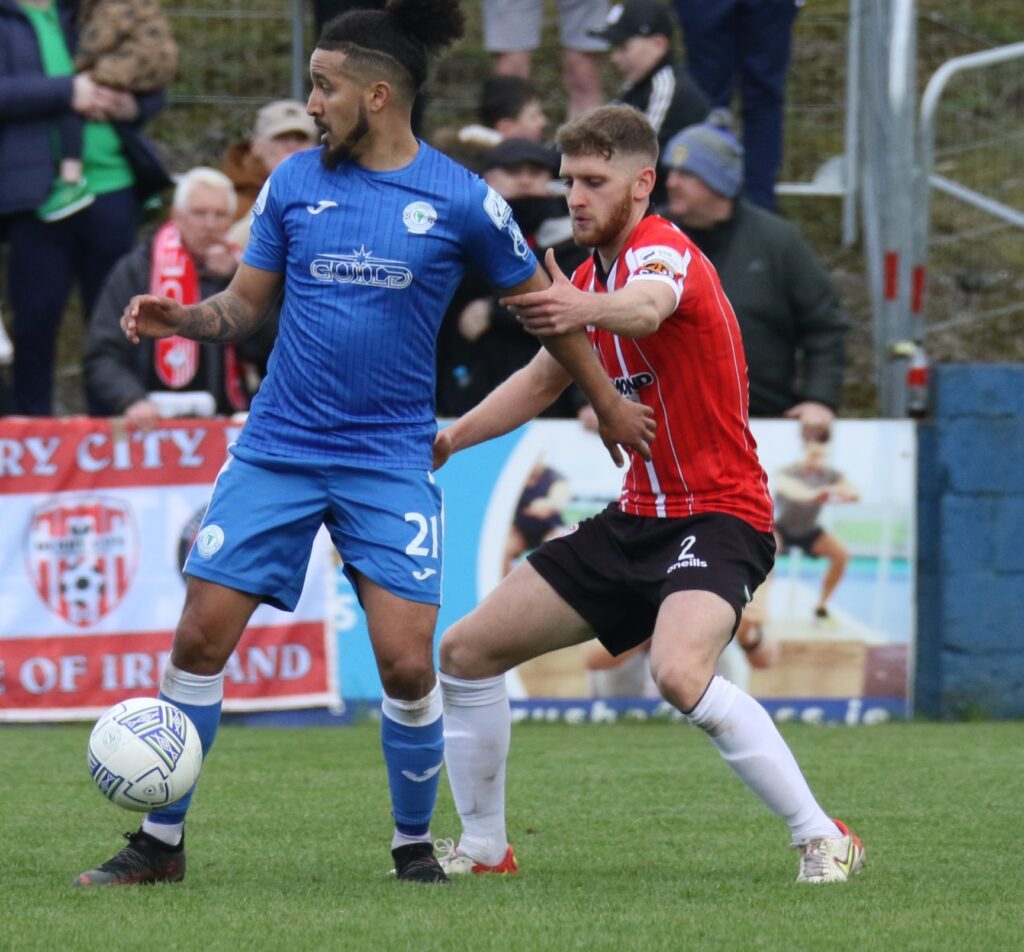 Bringing on James Akintunde, they still had a threat going forward as Harps pushed and Akintunde troubled the Harps defence, winning a dangerous free-kick on the edge of the box which Patching would knock over the wall and into the net as Barry McNamee tried to cover on the line. 2-0 with two minutes left on the clock.

Harps would get one back in added time from the penalty spot as Filip Mihaljević was fouled by Ciaran Coll who was just on the pitch.

The Croatian striker would step up and coolly send Brian Maher the wrong way for his first Finn Harps goal.

Harps piled on the pressure in the final minutes of added time and one last Boyle throw gave them a chance but it was cleared and John McLaughlin blew for full-time before Harps could send another cross in.

Subs: Joe Thompson and James Akintunde for Kavanagh and McGonigle (76 mins), Ciaran Coll and Evan McLaughlin for Lafferty and Smith.