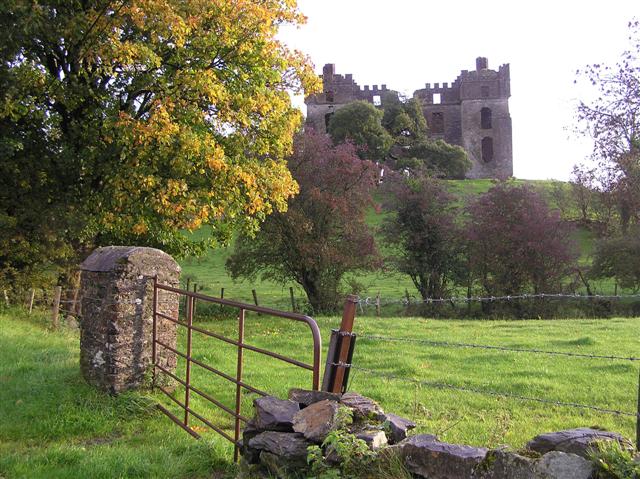 The Chairperson of Raphoe Community In Action has welcomed the announcement by that Raphoe Castle is one of eight successful applications to the Department of Heritage Community Monuments Fund.

Mary Harte said that this was an exciting first step towards the restoration of an important historic building in Donegal.

The Bishop’s Palace is one of a few castles in Ireland that although in a ruinous state maintain their original façade, in the case of Raphoe some 400 years after it was built.

Ms Harte said “The castle was built as a fortified dwelling, essentially a defensive castle in 1637 by the Bishop of Raphoe, John Leslie and has had a turbulent history. It was attacked by the Confederates, the Cromwellians, the Jacobites and the United Irishmen and eventually burned to its current shell after a turf sod fell onto the wooden floor.

“This grant will allow a Conservation Management Plan to be carried out to determine how best to restore and preserve the castle and the costs involved in the restoration of this wonderful building.

“We have been working closely with the Morrow family during the consultation process and I would like to thank them for their co-operation and permission for us to proceed with this project. The work will be carried out by Dublin conservation architects, Howley, Hayes Cooney who have been involved with the restoration of Carlingford Castle in Louth and previously in Donegal with Raphoe Cathedral and Buncrana Castle. There will also be an archaeologist and environmentalist involved in this stage of the process.

“The restoration of the Castle will be the next stage in the process which will involve significant funding. The project is at an early stage but I am confident we can drive this forward with the help of the community and government assistance. The aim is have the Castle restored if not to its former glory at least to a stage where everyone can share in its appreciation as a wonderful visual landmark in Donegal and enhance the tourism potential of east Donegal.

“This is a community led project under the auspices of Raphoe Community In Action and we would like to thank the Heritage Officer for Donegal Dr. Joe Gallagher for his assistance and encouragement in bringing the project to this successful stage in achieving funding from the Department of Heritage.”