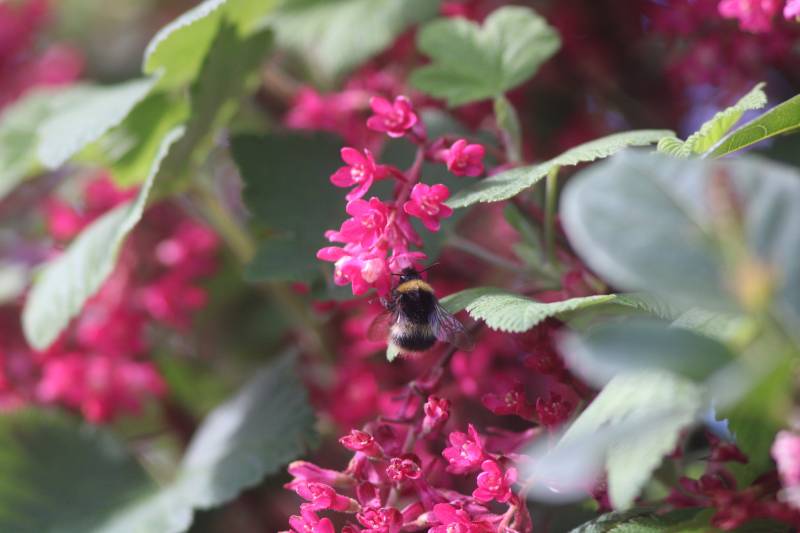 Flowering currant or ‘Flower and Corn’ as I always thought it was called, reminds me of my grandparents homes as they had a wee bit of this type of hedge in both of their back gardens.

Over the last few days I heard bumble bees at the wee section of flowering currant that I still have growing many years after they have all gone. 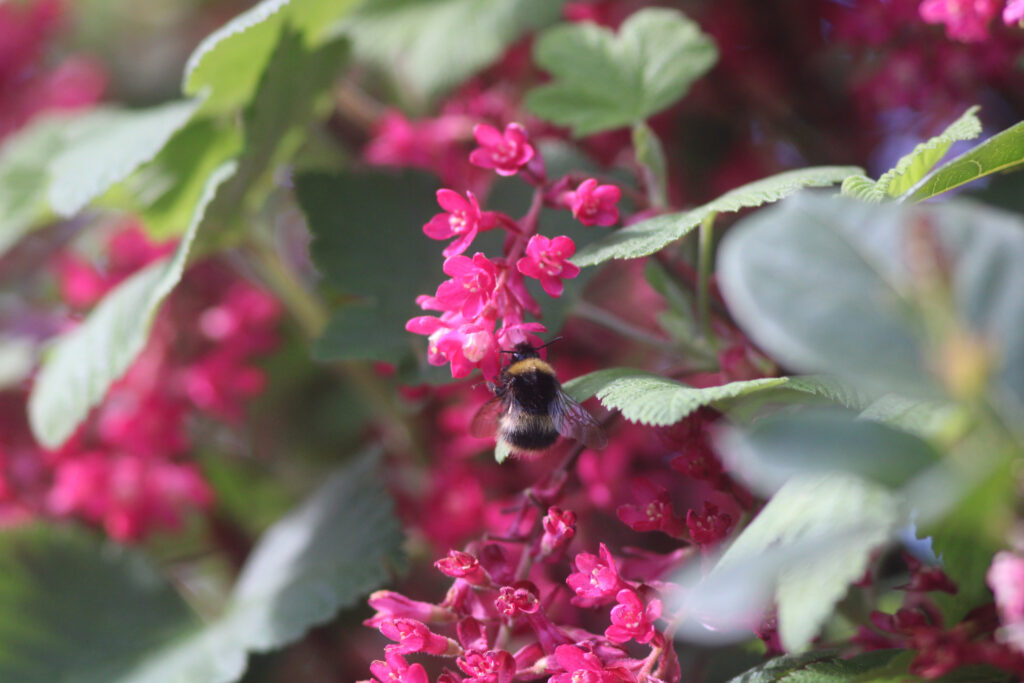 A bee taking pollen for a flour and Flowering Currant hedge in our back garden. Photo Brian McDaid.

It’s in my mother’s parents home and as I captured a photo of the bumble bee working away, it reminds me more of my father’s old home down in Pluck.

We prayed for eight people every night as children growing up, starting with my mother.

My granny in Pluck lived in a semi-detached cottage in the town land called Rossbracken beside the village of Pluck. They moved there from a wee house they lived in in the middle of Pluck Village. Their house in Rossbracken had an outside toilet, it took us as children a bit of getting used to, sheets of Derry Journal tore into squares and tied with cord hanging on a nail. 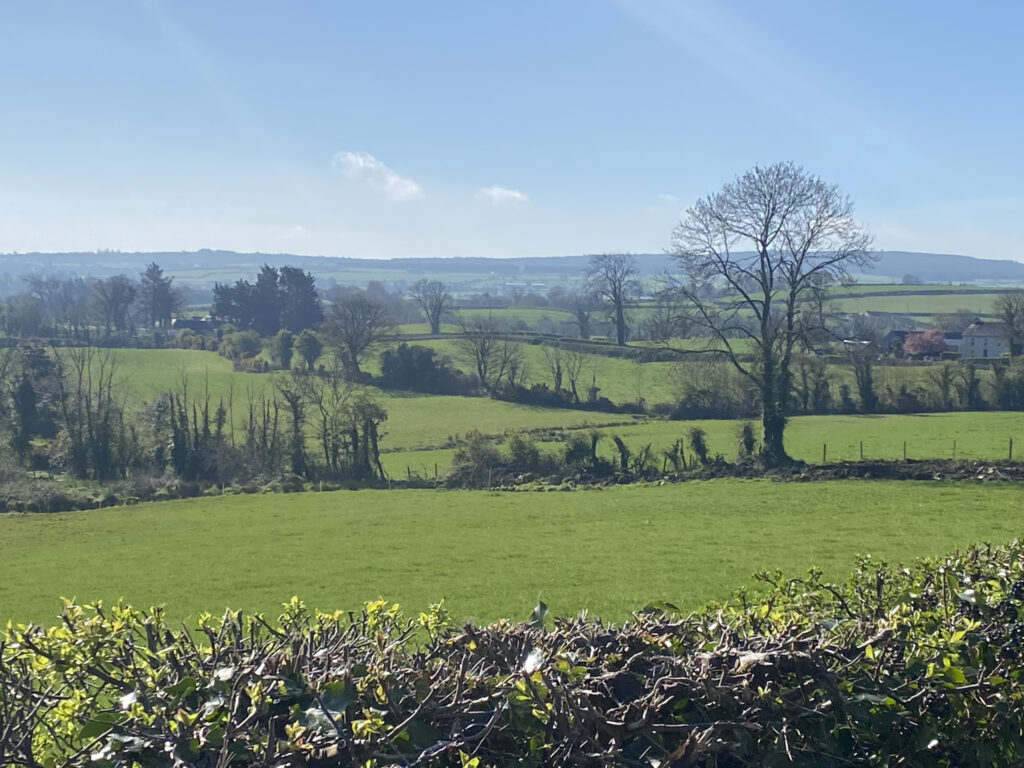 A view across the fields down to my granny’s old home was near Pluck. Photo Brian McDaid.

It was a dry toilet, but this outside toilet was very well kept, Valspar gloss paint on the toilet seat, the same colour as the front door of the house, a winey colour. A recent trip down what was once was the main Derry and Lifford Road, I could clearly see the contours of the two fields before you arrived at what once was my ‘granny in Pluck’s’. 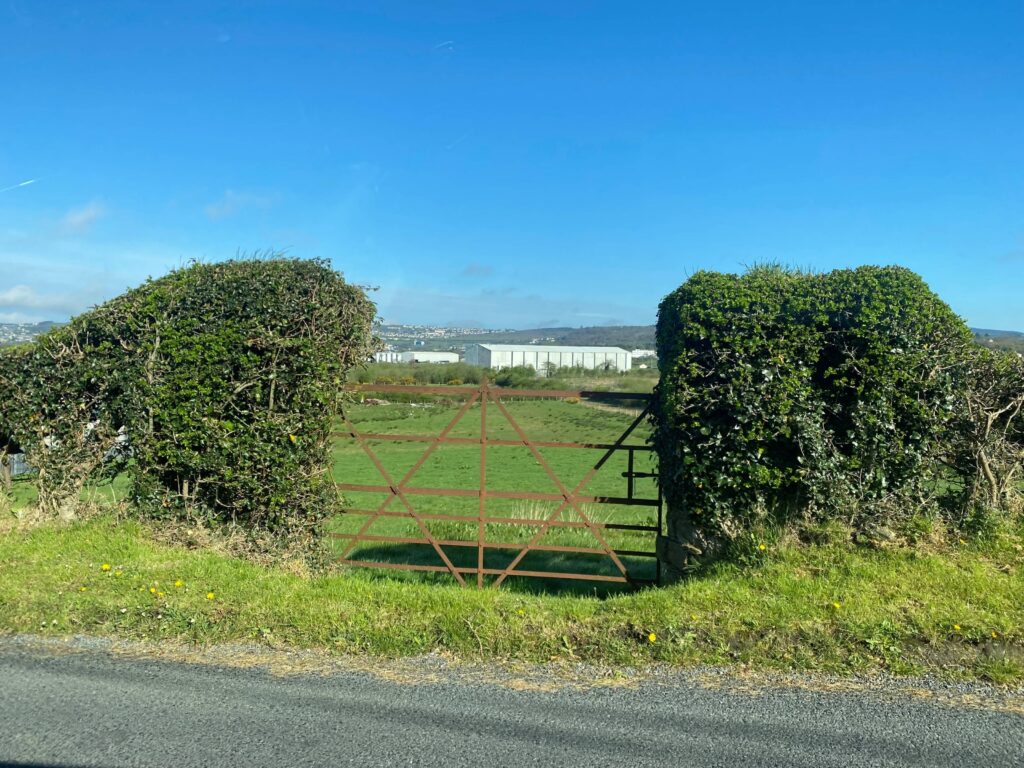 Maybe someone cleared the trees along the ditches back a bit, but the view into these two fields just reminded me of going to Granny’s as a child. We looked so forward to going to Pluck, and the sprawling garden to the side of the house. We could play anywhere in the garden except near an old well in the garden that was covered over with a sheet of tin.

There were a few old cars in the back garden, wee ongoing projects that my uncle Hughie was working on, they were out of bounds too but there were that many nettles around them that we didn’t have to be told twice not to venture in there for fear of getting stung.

There was no running water in the house so we loved the novelty of going down the lane towards the big Isle to a well along the road side.

There also was a wooden barrel on a wee stand at the back corner gable of the house, used to collect the rainwater off the roof.

We would often find strawberry’s growing wild in the back garden and my father would tell us stories of his late father Patrick who was a great gardener.

He would tell us to look where we found the strawberries growing and there we would find old slates he would place flat in the ground to generate heat to grow the strawberries.

There were plum and apple trees in a side garden divided up with hedges which had patches of the flowering currant mixed in through it.

My memories of heading down to Granny’s was the short road trip and my father telling us what people lived where, looking over hedges in through old gateways into fields, and would alway show us where the old Lough Swilly Train made its way down from the road on the left hand side above Drumore.

This week at the same spot, you looked down at the busy dual carriageway which is built on the very same line that the old train went many decades before. 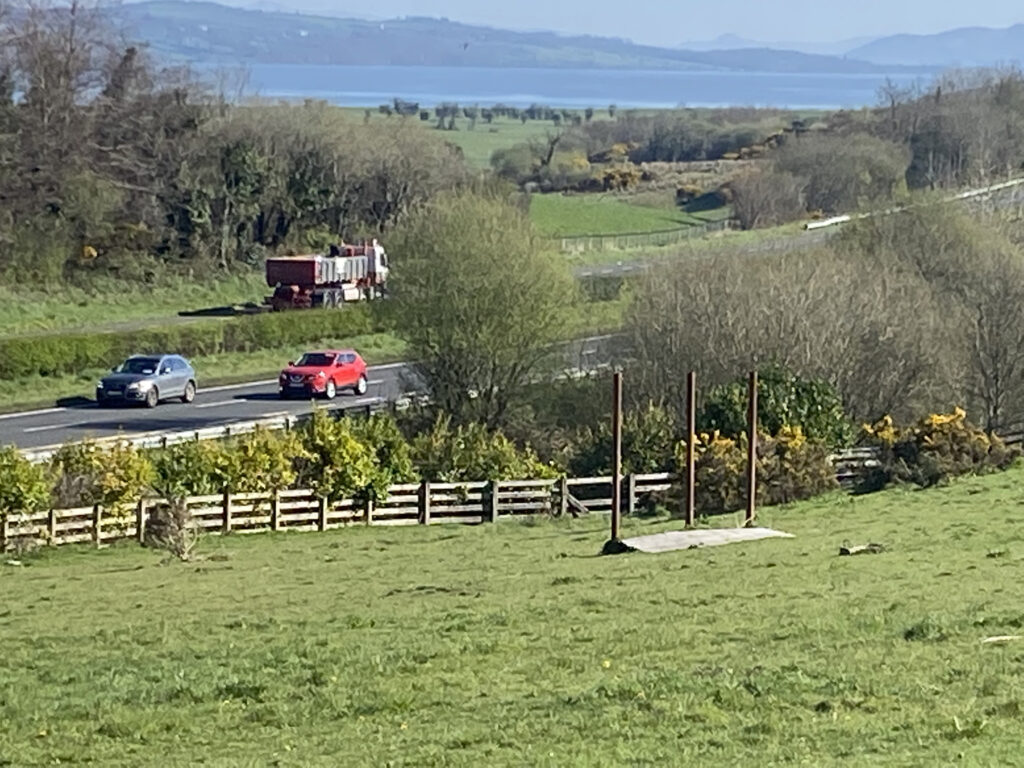 Traffic on the dual carriageway which was originally the path that the old Lough Swilly Train made its way out of Letterkenny. Photo Brian McDaid.

On summer evenings we went down to cut sticks for firewood from the back garden. I always associated the smell of chainsaw mix and freshly cut trees and our old grey Anglia Estate that never started with the key.

My father always parked outside the gate of Granny’s in the slightest of a wee rise which he would free wheel away from before the old Ford Engine would fire up, kick starting in second gear.

Then we would head down the big isle road and would always tell us we were now  ‘Turning  at Turners’, that was the laneway of Willie Turner’s old home.

Then we would come back up past Granny’s again where she would stand at the front door to wave to us going up past and she would wave away to us until we would head up the road and out of sight.

On a recent journey down that road I passed by a big tree along the roadside. My father who would have been 95 now if he was still living, told us that this tree was always a massive tree even when he was a child growing up. 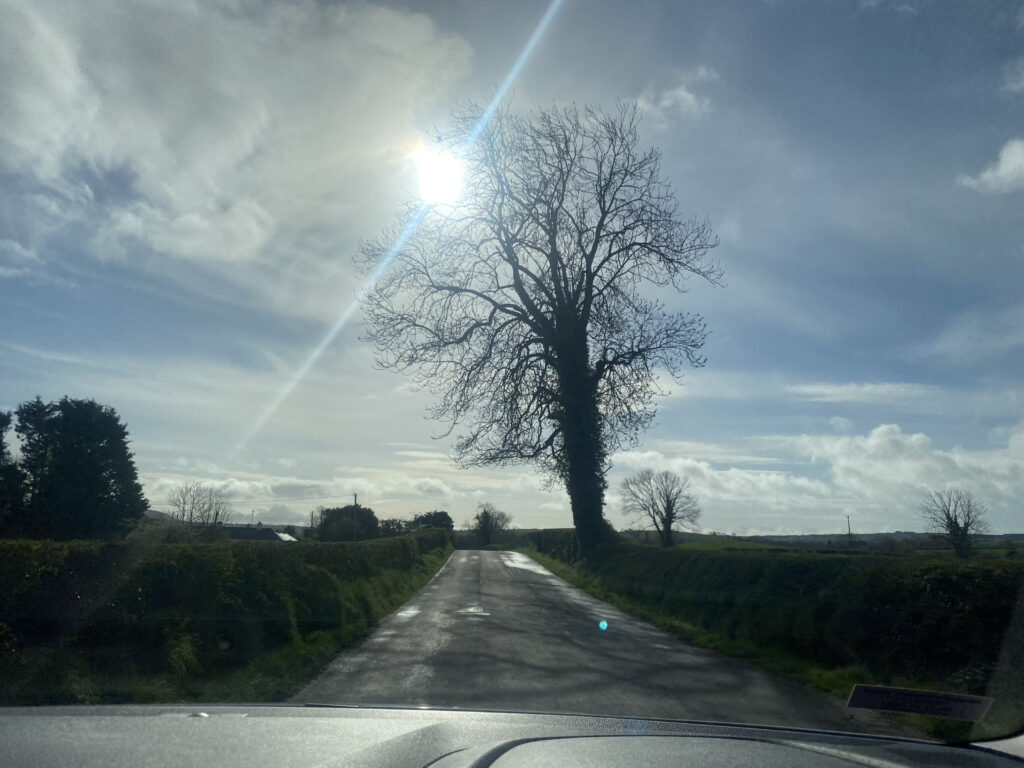 My father’s tree near his home in Rossbracken where his childhood friend was knocked down pictured this week as the start of another summer Photo Brian McDaid.

He always told us about a wee friend of his as a boy that was knocked down near to that tree and died of his injuries. This would have been in the 1930’s but my father never forgot him and always talked about him.

On a lighter side, my father told us about a morning that they were walking to school and the Main Derry Road was covered in loaves of unsliced bread that had fallen out of a bread van that had opened up going along the road.

‘Shop bread’ as they called it, was thought of as a luxury as all they had was homemade bread growing up. And for a few days they were living it up with shop bread on the kitchen table.

The arrival of the flowering currant and leaves budding on trees is a little late this year but that special shade of fresh green that they produce when they first fully appear, signal that nature is moving through summer again as it does every year. 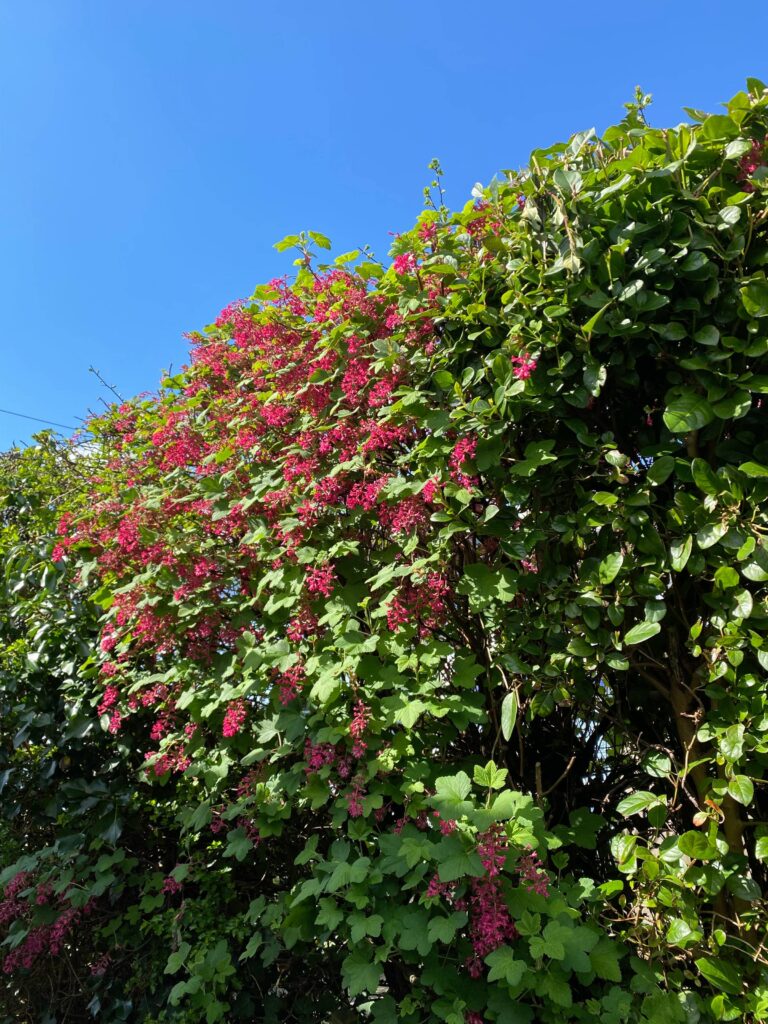 Flowering currant in full bloom this week reminding me of old back gardens from years ago. Photo Brian McDaid.