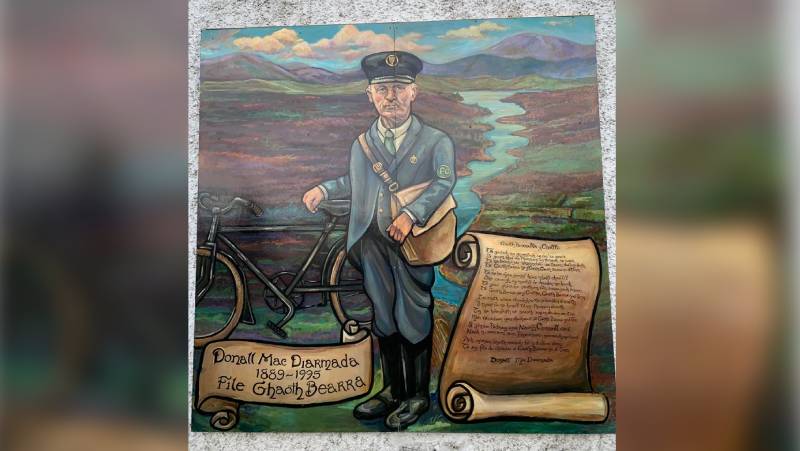 Doochary Development has been approved funding for their recent projects of erecting murals on derelict buildings or places that are appropriate for a mural.

Donal was a postman in Donegal for 58 years, the longest serving postman in Ireland when he retired in 1964.

He joined the postal service as a relief worker on his 17th birthday and is reported to have never missed one day of work.

A native Irish speaker, he always proudly wore his Fáinne on his coat. He composed many songs and poems including “Bathadh Aaron Mhor”, “ Gaoth Barra Na gCoilte, Gaoth Barra Na dTonn”, “My own Gweebarra Bay”, to name but a few.

Donal was born on 30th of June 1889 and started working in Doochary post office on 30th June 1906 under British regime as a temporary postman on a walking post.

His starting pay was 8 shillings a week and he retired from the postal service on the 29th of June 1964 age 75.

Donal was raised in Doochary, but moved to Commeen during his married life, they had a lovely neat cottage there with a beautiful garden at the front. The cottage still remains in Commeen, still as beautiful.

The artist who created the mural, Dr Andrea Redmond, is a well respected artist whose paintings and sculptures include Irish nature flora and women’s spirituality.

She has been a political rights activist and artist in Canada and Northern Ireland for over 40 years.

The first woman in Belfast to paint political murals, her first in 1983, Andrea painted over 40 murals at the height of the Northern Irish Troubles with themes such as Irish Traveller cultural rights, anti-rubber bullets campaign, the Hunger Strike, highlighting child poverty and many honouring women activists.

Her mural work has featured in a number of publications and films on Northern Ireland.