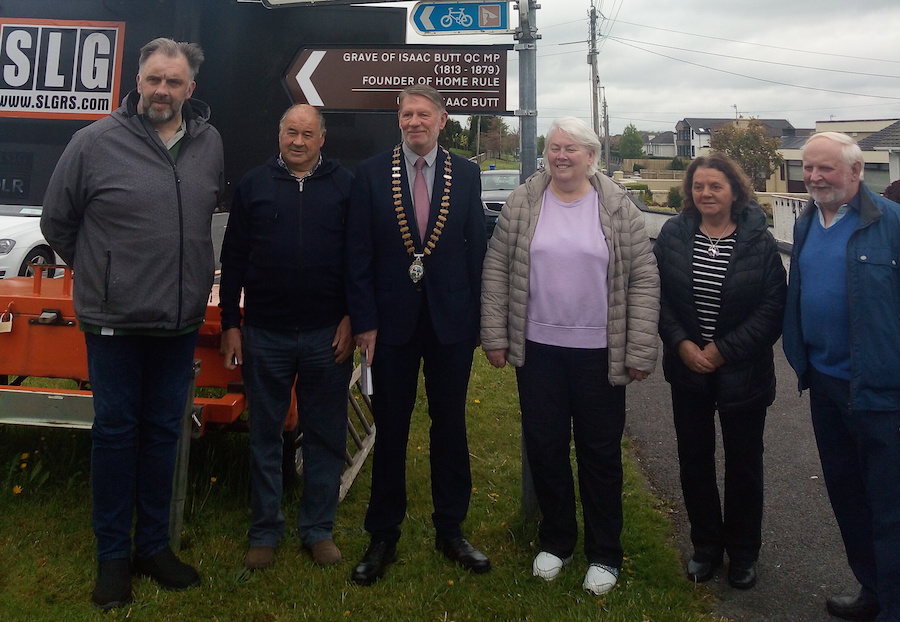 New signpost erected to grave of Isaac Butt in Stranorlar

Ballybofey and Stranorlar Historical Society have recently erected a plaque on the main road to the grave of Isaac Butt (1813 – 1879) in the Church of Ireland cemetery in Stranorlar.

Guest of Honour for the occasion was Rev. Raymond Blair, newly elected President of the Co. Donegal Historical Society.

Raymond is a native of Cavan Upper, Killygordon and is a Minister of the Reformed Presbyterian Church; he served in Galway for 20 years and is now based in Limavady.

Incidentally, both of them received their secondary school education at Raphoe and both are graduates of Trinity College, Dublin.

Raymond paid tribute to Kathleen Whelan from the local historical society who did most of the work in the completion of the task.

Isaac Butt is one of the major figures in Ireland’s history. Recognised as the founder of the Home Rule movement, he was also an MP, a scholar and a lawyer of the highest degree.

Pictured at the new signpost is Rev Blair with Kathleen Whelan on his immediate left along with members of the local historical society.

New signpost erected to grave of Isaac Butt in Stranorlar was last modified: May 3rd, 2022 by Staff Writer
Facebook0Tweet0LinkedIn0Print0