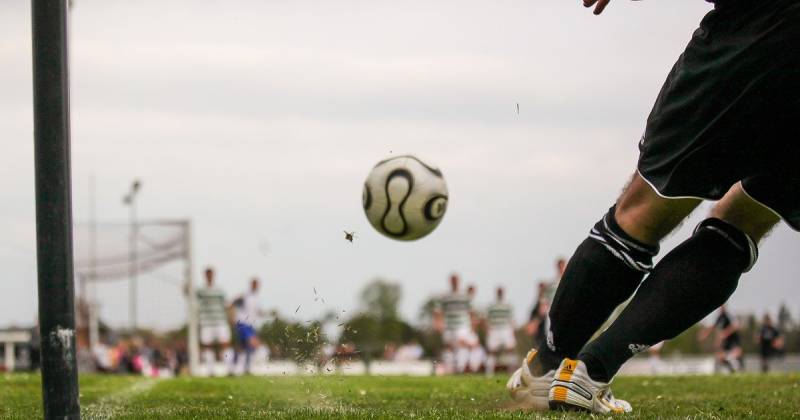 written by Cronan Scanlon May 8, 2022
Facebook0Tweet0LinkedIn0Print0

It was another busy weekend for local soccer in the Donegal Junior League 50th Anniversary Season.

In fine conditions for football both sides were in need of a win. It was the away side that started quickly and opened the scoring within two minutes, when Kevin Rafferty headed home a corner at the back post. Glenea pushed for an equaliser and were rewarded on 10 minutes when Cathal Mc Geever scored with a fine long-range effort.  The home side continued to press and went close to taking the lead on 25 minutes when Ciaran Coll got onto a through ball but saw his effort drift the wrong side of the post.  A couple of minutes later Ciaran Coll forced a fine save form Eddie Mc Laughlin in the away goal. Glencar had a chance to take the lead late in the half when Paddy Collins got free but saw his effort well saved by Oran Craig. In the 2nd half Glencar started brightly and took the lead on 48 minutes when, after the home defence failed to clear a corner properly, Paddy Collins was on hand to drill home from the edge of the box. Glencar threatened to extend their lead but failed to take a number of chances and were made to pay on 60 minutes when Kyle Mc Mullin’s through ball found Calvin Murray who rounded the keeper and slotted home. Glenea took the lead on 63 minutes when a cross from Cathal Mc Geever was headed home by Ciaran Coll. Glencar pushed hard for an equaliser but the home defence held firm though Graham Cullen forced a fine save from Oran Craig. Glenea were happy to play on the break and came close to increasing their lead through efforts from Cathal Mc Geever, Noel Sweeney and Remy Moran. In the final minute Glencar had one final chance but Mick Martin saw his effort fly the wrong side of the post leaving the home side in a position to avoid the play off.

Keadue Reserves won their penultimate game of the season in easy fashion against an under-strength Fintown at a sun drenched Central Park. The home team were on the front foot from the off but found in the first fifteen minutes that chances were hard to come by against a sturdy and well organised visitors defence. Keadue were a bit rusty after a few weeks off but once the twentieth minute passed they started motoring. Luke Neely fire home the opener from the spot. Fintown had a chance on thirty-seven minutes when a free kick from distance went just over the bar. On forty minutes Mark Boyle shot low under the keeper after a fine passing move from the home team. The first half scoring was completed on the stroke of half time when Luke Neely finished neatly at the far post. Halfway through the second half, despite Fintown’s doggedness, Keadue went further ahead when a good move down the right involving lots of passes was met by Jack Doherty to tap in to the net. Liam Boyle finished off the move of the match on seventy-one minutes, lifting the ball over the keeper for number six and finally on seventy-five minutes Peter Mc Gee slotted home at the near post in what was a good afternoon’s work for the home team.

A good team effort from Fintown who were short several regulars while for Keadue, it’s five wins on the trot. Standing out for them were Liam Boyle, Luke Neely, Pauric Neely and Peter McGee.

Drumoghill hit the woodwork twice before Odhran Donnelly scored their third midway through the half. Cranford had more possession in the second half but Drumoghill always looked the more dangerous going forward with Karol Mc Ginley adding a fourth after hitting a post. Gareth Temple hit the bar again near the end. The win finished a strong second half to the season for Joe McLaughlin’s Men with them only dropping four points but results elsewhere means they end up in the Play-Off position.

A dramatic end to the Old Orchard Saturday Division Two in Glentornan Park where the top two battled out for the title. The hosts started the game brightly when Conor Mc Mahon troubled the Copany backline with a few mazy runs. Copany held strong at the back with Thomas Given marshalling the defence. Copany took the lead when Glen Harron powered home a fine header from a great cross. Dunlewey pushed hard to get back into the game with chances for Eamonn Collum, Conor Mc Mahon and Joseph Devenney but they could not find the back of the net. Copany went in at half time a goal up. The second half started with Dunlewey again pushing for an equaliser but Copany held firm. Copany tried themselves to hit Dunlewey on the counter attack but were unable to add to their tally. The last 15 minutes of the game were a frantic affair with Dunlewey firing everything they had at Copany and had a few chances but just couldn’t find the finishing touch. Dunlewey were unlucky not to get an equaliser when Lorcan Gallagher headed onto the crossbar. Copany were victorious in the end up in what was a great season for the Laghey side. Congratulations to Copany Rovers on their success.

Kilmacrennan managed to come out on top with a late goal on a glorious day for football at the Letterkenny Community Centre. Kilmacrennan made a few tactical changes from their previous game at Donegal Town with left back John Sandilands dropping to the bench. Kilmacrennan started brightly and took the lead with a Caolan Kelly header from close range. The rest of the game was even until Kildrum equalised on 70 minutes through a Jacob Mc Daid header after a long hopeful ball into Kilmacrennan’s box. Kilmacrennan applied the pressure for the rest of the game and when they looked like running out of time eventually got the winner through a late free kick which James Doherty put in the top corner. Best for Kilmacrennan James Doherty with a good team effort from Kildrum.

Ballybofey produced a flourishing finale to their season with a fine win over Gweedore Celtic at Dreenan, unfortunately it wasn’t enough to see them beat the drop and they will play Division Two football next season. Goals from Niall Mc Closkey, Caolan Marley, Daithí Mc Mahon and Mark Griffin met a sole reply from one of the Donegal League’s great ever target-men, Thomas Diver, who netted his three hundredth and first League goal on the day. It will now be a case of rebuilding for the Twin Town’s men.

Cranford finished off a disappointing season on a high with a home win. Drumoghill came out of the blocks fast and took the lead after 15 minutes when a good move down the left side was squared for the striker to tap home.  Cranford had Jason Hegarty to thank to keep it at one with two good saves. Cranford came into the game after half an hour and started to create some danger. Cranford equalised in the second half from Connor Shiels. Cranford then took the lead from another Sheils’ goal. The lead didn’t last long was Drumoghill equalised with a great finish from the edge of the box. Both sides pushed hard for the winner and it was Cranford who got it from Kyle Mc Fadden.

Newly crowded Division One champions Fanad United rounded off their season with a 4-0 victory at home to Raphoe Town. The early stages were close but it was Fanad who took the lead on 15 minutes. Keelin Mc Elwaine chased down a long ball and his shot produced an excellent save from Aaron Hepburn however the rebound fell to Dylan Dorrian who fired home from the edge of the box. Raphoe missed a great chance to equalise on the half hour mark. Keelan Gillen showed great skill to get past his marker only to see his shot crash off the crossbar. In the 35th minute Fanad left back Liam Mc Grenaghan hit a thunderous volley which produced a superb fingertip save from Aaron Hepburn. Fanad extended their lead in the 70th minute. Eddie O’Reilly latched onto a long ball and fired high into the net. Raphoe were creating chances and in the 80th minute Corey Gillen forced Mark Mc Conigley into a super point blank save. Fanad then made the game safe with 2 goals in the final 3 minutes. First Paddy McGinley pounced on a breaking ball after an Eddie O’Reilly corner and scored from close range. Then just before the final whistle Eddie O’Reilly got his second of game when he finished low into the bottom corner.  Referee: Seimi Ferry

Milford United put in a big performance on Sunday to overcome St. Catherines by two goals to one to gain a place in the Play-Off. Two first half strikes, first from Johnny Logue when his strike from 25 yards went over the top of the keeper on 15minutes then Cathal Mc Gettigan with a brilliant strike from 30 yards to the top corner after a good passage of play by Milford. Josh Maxwell was denied before the break with a great block by Caolan Mc Gettigan in the Milford Goals. Milford led 2-0 at the Break. A minute into the second half Josh Maxwell got in behind the Milford defence and slotted past Mc Gettigan. Killybegs were on top for periods but Milford defended well and worked hard throughout and create a few chances on the counter attack. A good workman like performance by Milford with Pauric Curley, Joey Cullen and Liam Donnelly the pick of the bunch. St. Catherines were lively throughout playing good football but on the day found the hard-working Milford boys hard to break down.