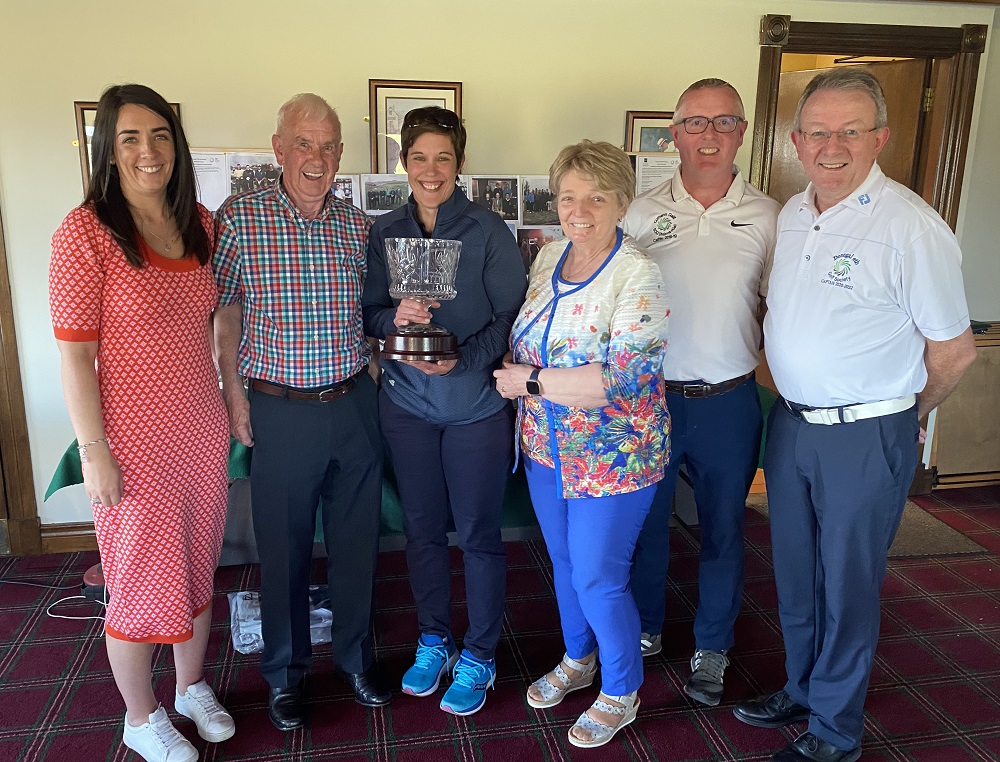 Saturday 23rd April saw the first edition of what is poised to become one of the most important outings on the Donegal ETB Golf Society calendar – The Memorial Trophy.

The competition will be held annually in remembrance of former members who have passed away. Society Captain, Jim McGlynn created a poignant photo display featuring dozens of photographs of our dearly missed colleagues, pictured during the many happy occasions spent together since the inception of the Society 30 years ago. Accompanying the display was a fitting tribute poem penned by Society P.R.O. Rory White. Pride of place on the display was given to the beautiful trophy which was sponsored by the family of the late Michael McGrath who sadly passed away on February 1st 2018. We were delighted that Michael’s parents, Pat and Mary and his sisters, Mary and Bernadette joined us for dinner and the presentation of prizes. 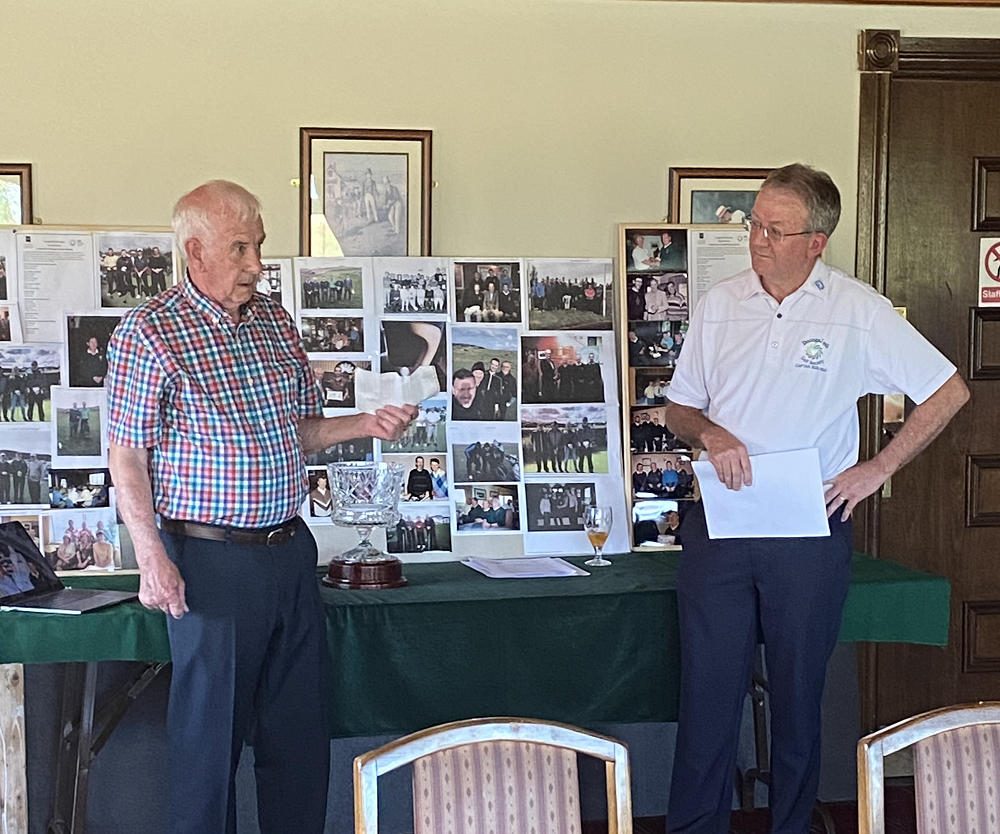 Ballybofey & Stranorlar Golf Club was the resplendent setting for the inaugural hosting of the event as the society was again blessed with perfect golfing conditions. The emphatic first winner of the Memorial trophy was Moville Community College’s Sally Ann McFadden who romped home with an astonishing 47 points.

The enormous total just eclipsed the previous record score in the society of 46pts shot by society stalwart, Éanna Ó Mainín in Cruit Island Golf Club a number of years back. This was Sally Ann’s first-ever win in the society and what a way to do it! It turned out to be a perfect day for Sally Ann who had ‘one of those rounds’ as she also collected both the Nearest the Pin and Longest Drive prizes.

Runner-up on the day, and all but assuring himself of yet another Golfer of the Year gong, was perennial competitor Paddy McDaid who enjoyed another wonderful round of 40 points. Paddy’s second-place finish means he is now virtually uncatchable going into the final event in Letterkenny at the end of the month. In 3rd place was John McIvor with 36pts narrowly pipping Tommy Greally who came 4th on 35pts. The retired members’ category prize went to Sean Murphy on 34pts while the Category IV prize was won by Elaine Russell on 35pts. Nearest the pin for the men was won by Seamus Clerkin while Cathal McGee collected the Longest Drive prize. 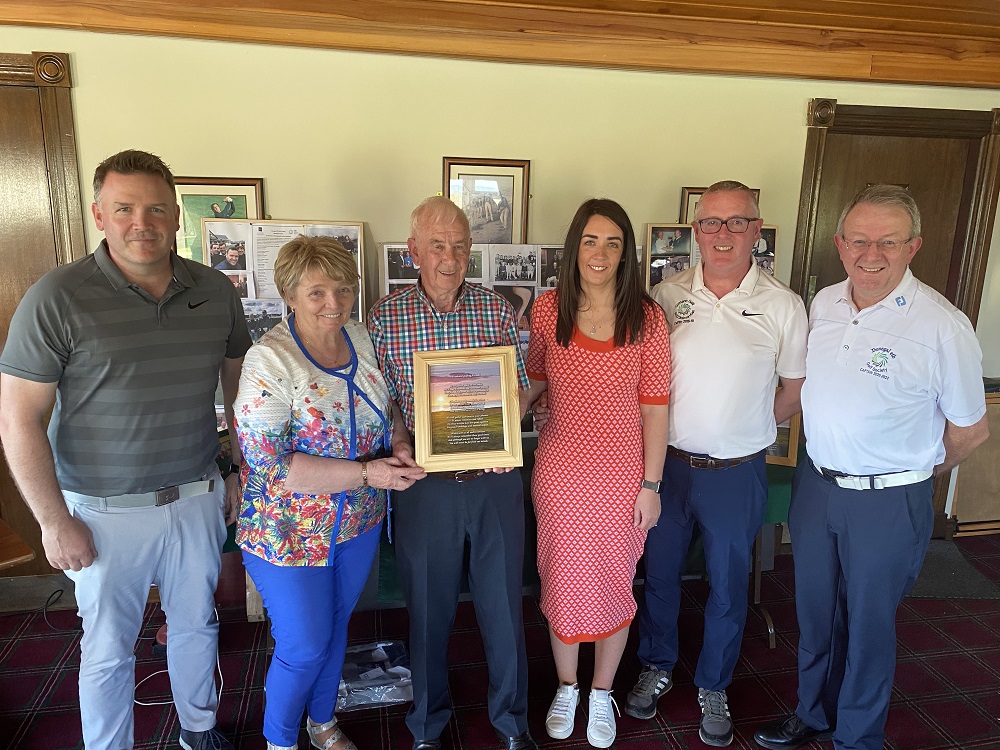 The McGrath family being presented with a copy of a tribute poem pictured with Rory White P.R.O and Captain Jim McGlynn

Seán Ó Longáin and his wife Eileen were also distinguished guests as the prizes were given out for the society’s annual team competition named in honour of our former CEO. Rosapenna’s Old Tom Morris links was the setting for the event which was held a number of weeks earlier on a beautiful Spring day along the shores of Sheephaven Bay. It was the Finn Valley College duo of Paddy McDaid and Rory White who came out on top with a magnificent score of 56pts that ensured the trophy returned to the Finn Valley for a record 6th time. The round included a number of birdies from both players and the first Eagle in the history of the Society from Rory White who captured the big bird on the Par 5, 8th hole.

Runners-up on the day were the ETB Admin Offices and Gartan OETC pairing of Society Captain, Jim McGlynn and Brona Duddy with a fine score of 50pts.

Third place went to the Coláiste Ailigh team of John Bosco Gallagher and Ciaran Ferry who were a further point back. Nearest to the Pin for the gents went to Rory White. Longest drive for the ladies was won by Brona Duddy and Éanna Ó Mainín picked up the men’s prize. 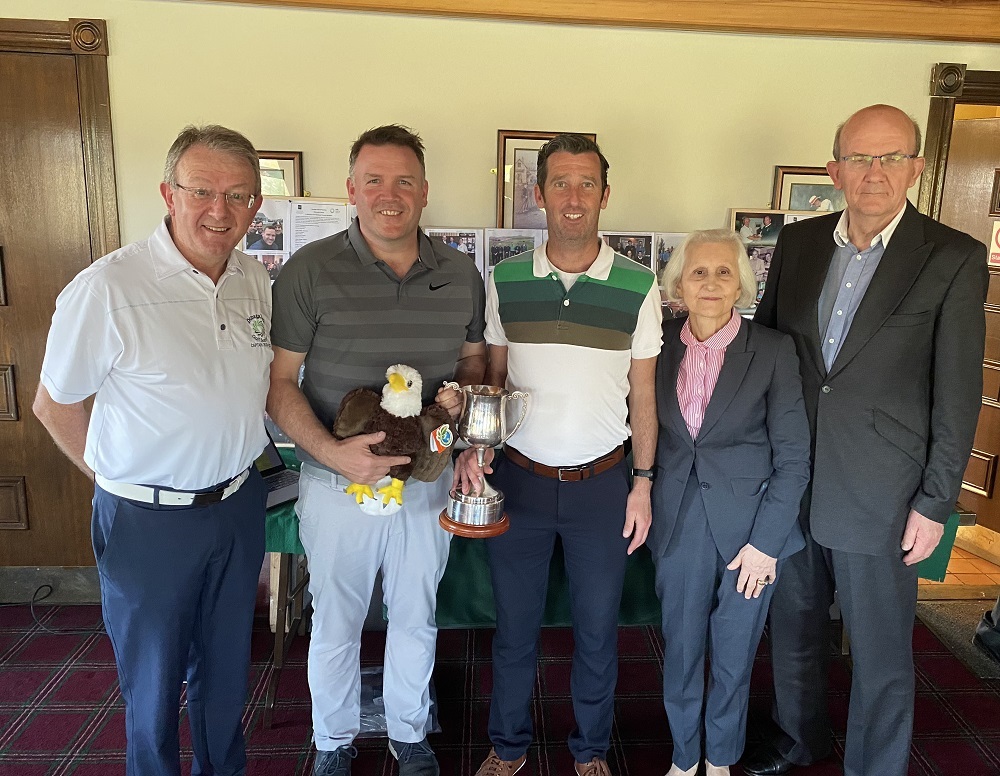 The final outing of the year is Jim McGlynn’s Captain’s Prize which is due to be held in Letterkenny Golf Club on Saturday, 28th May. While the Golfer of the Year title is all but settled, the coveted Captain’s Prize will be all to play for as will the Magnificent Seven competition which is incredibly close with several contenders hoping to scoop the trophy which is awarded for the cumulative score gained at signature holes on each course throughout the season.