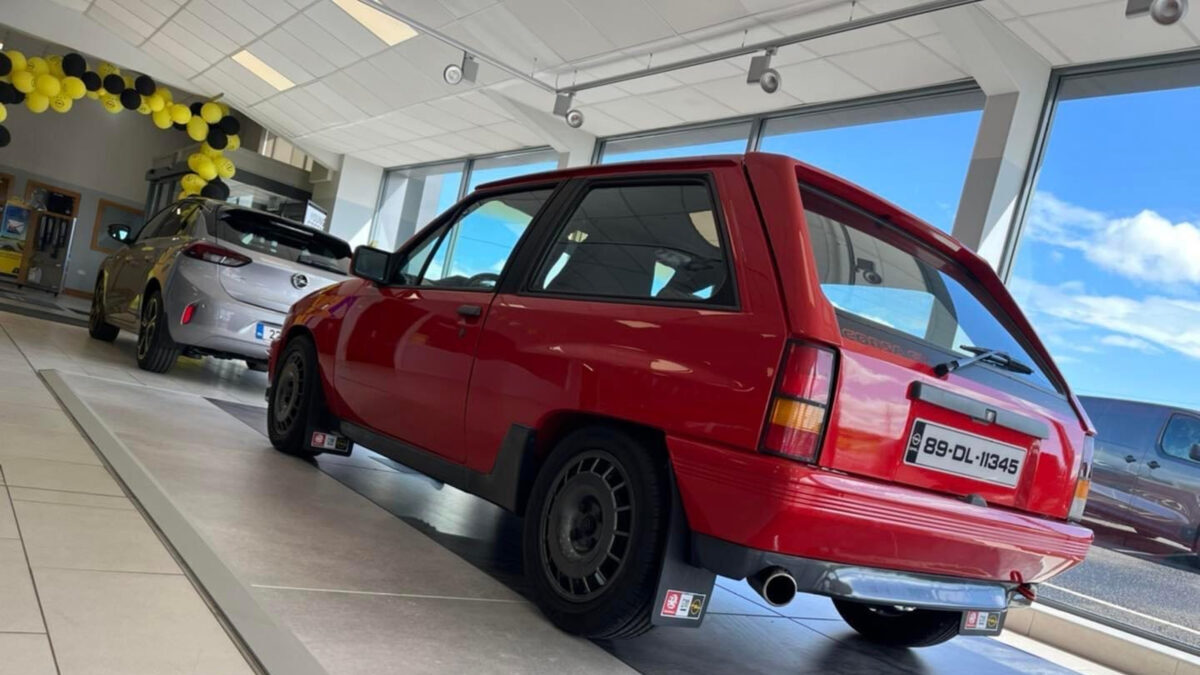 DD Motoring: Corsa culture in the days of Big 4 sauce and strawberry milkshakes

written by Brian McDaid May 11, 2022
Facebook0Tweet0LinkedIn0Print0

Donegal Daily motoring columnist Brian McDaid is marked 40 years of the Opel Corsa with a trip to Manor Motors… and a trip down memory lane.

Just like that the Corsa is 40! Call it a Nova when it’s a Vauxhall or a Corsa when it’s an Opel, (now all called Corsa) they were the same made by two different carmakers within the General Motors group back then.

It’s a sunny Sunday morning and it’s hard to see the car with the reflection of the sky against the Opel showroom windows, but then that same sky reflects the journey that a 40 year old brand like Corsa has travelled, memories of people and the way we were, happy times and sad times all mixed into a journey told by the blue skies and the clouds within it. 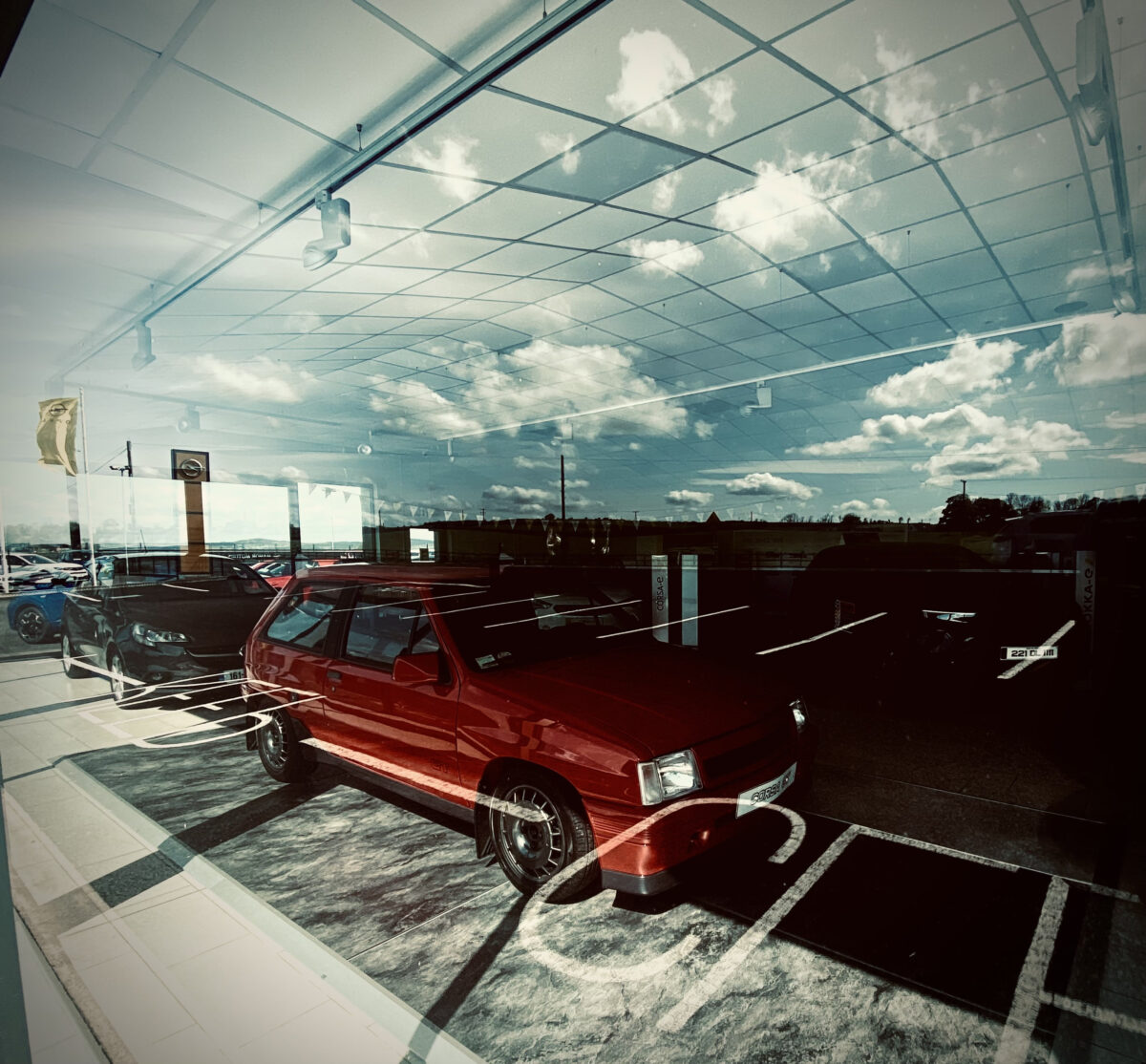 Derry numbers plates CUI and Eakin Motors on the back window sticker comes to mind when I think of Vauxhall Novas when their cars came out first.

The north always seems to have the new cars first, parked up on the Port Rd outside the Golden Grill, the young ones’ cars, groups of Derry Girls crossed the border back in the day in Novas and the likes to go to dances in Bella’s Disco in the Grill or the Scorpio nightclub in the old Ballyraine.

There was an endless supply of used parts for the Nova and Corsa so for many they were their first car. Over the last 40 years many young drivers ripped up their L plates after passing their driving test behind the wheel of a Nova or Corsa.  Most of us were only able to buy them when they were second hand.

They were the years of the big hairdos, listening to songs like ‘Close to Me’ from bands like The Cure or ‘Dancing in the Dark’ from Bruce Springsteen ‘I Wanna Dance With Somebody’ by the late and great Whitney Houston. In them years the charts were played on bootleg cassettes taped off the radio.

These cars came in below the Opel Kadette and the Vauxhall Astra in the range as a compact to compete with rival car manufacturers. Starting off as a 3-door hatch these progressed to become available as a five-door boot version, a diesel right through to the present generation as an all Electric Vehicle (EV)

I never owned a Corsa but knew many that did – young and old. I once towed my late brother in law’s brown Corsa up from Birr in Co. Offaly with a tow-boy (sometimes called an Ambulance) and then we went on a journey to locate my uncle’s stolen Blue Corsa from Northern Ireland which was stolen from outside his front door at the foot of the town in Letterkenny.

The Corsa and Nova was born in an era of Big Four sauce and strawberry milk shakes in our wee town, magic trees air fresheners Son of a Gun cleaner, and Tyre Paint and not forgetting a big Donegal style item which sometimes had to be excused as a security item for travelling in the north, when stopped by the guards, that yellow number plate on the rear. Add to that the removal of the middle box in the exhaust system to give the car more of a rip to it. Some even colour coded the rear drums and the front callipers in behind the wheels. 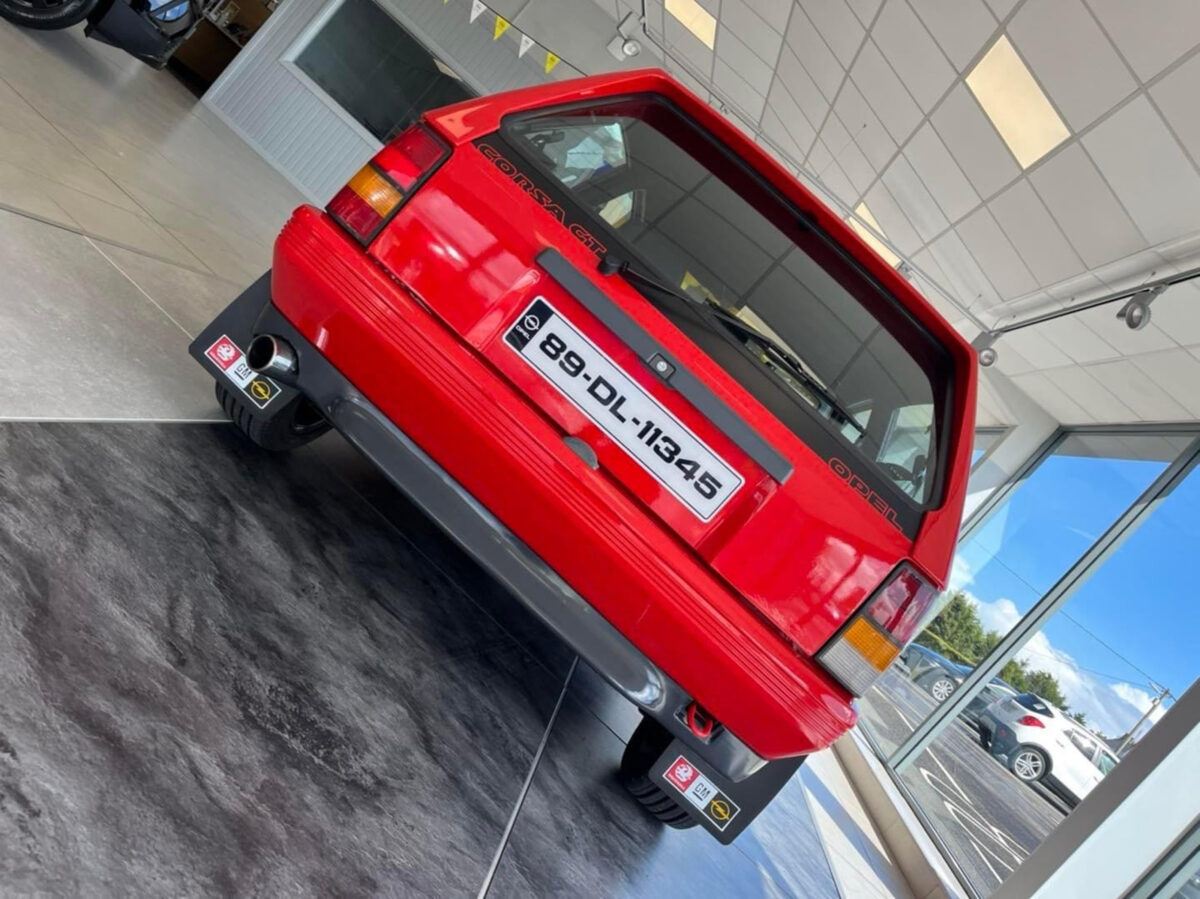 The classic Corsa GT taking pride of place to celebrate the 40th birthday of the car.

It wasn’t only owners of the Nova and Corsas that were doing them up.

The motorsport division of the car manufacturers were making these innocent wee hatchbacks into wolves in sheeps clothing – bigger and more powerful 1600 and 2 litres engines were shoehorned in under the bonnet, and amazing results were achieved in these cars on the rallying scene in the 80’s and 90’s. If it was minis that were taking on the best of the rest in the 60’s and 70’s in the likes of Paddy Hopkirk it was drivers like the late and great Dave Metcafe who was bringing these wee Novas home in high finishing places in the later decades.

A681 DNT’ was the number of that wee white Vauxhall Nova. The late and great Colin McCrea starting his rallying career in a very second, third or even fourth hand Vauxhall Nova once steered by the great Harry Hockley to great success that same Nova had once had the great F1 Ace Ayrton Senna behind the wheel in a magazine promotion of the time Jimmy McCrea was a household name starting in motorbikes before changing to rallying with old Dealer Team Vauxhall. (DTV) Firenza and Chevettes. His son, young Colin, was to become world famous as a rally champion starting off in his humble wee Nova. 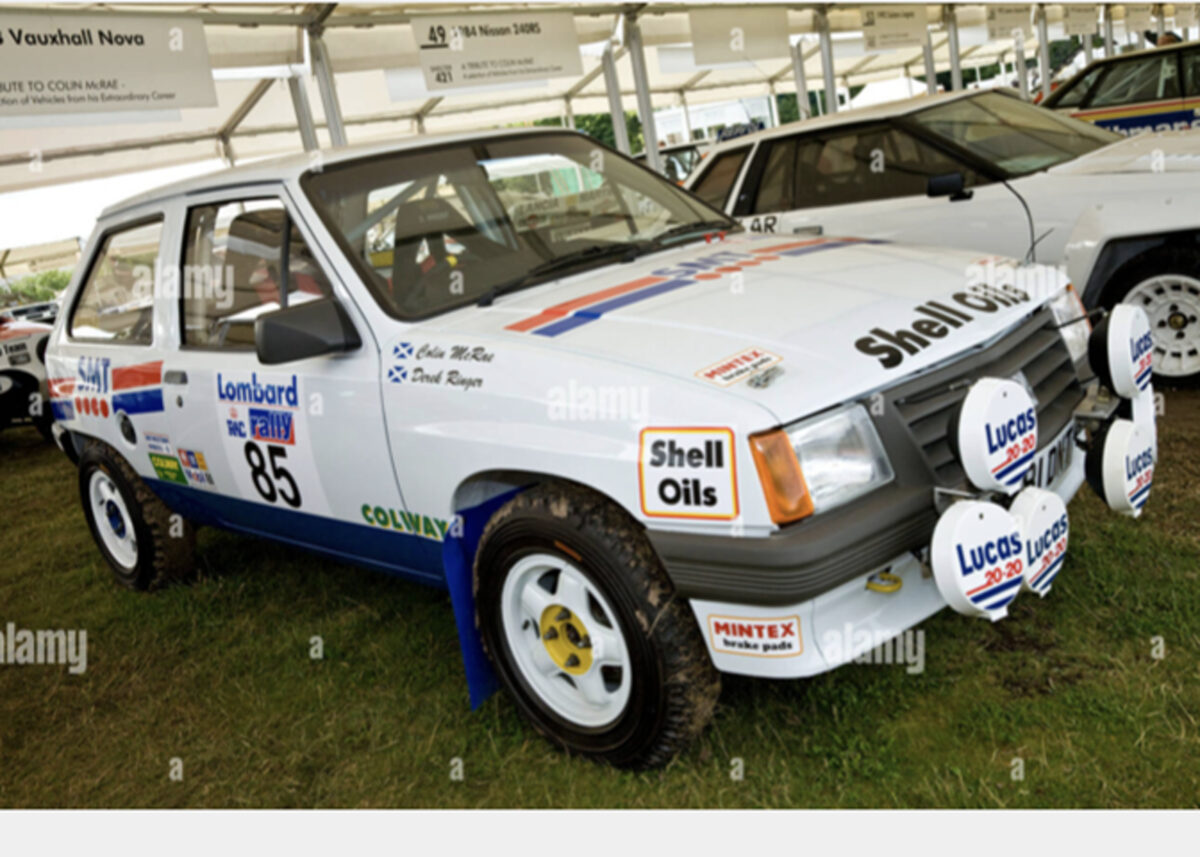 Colin McCrea car which which he start his rallying career in with Derek Ringer. 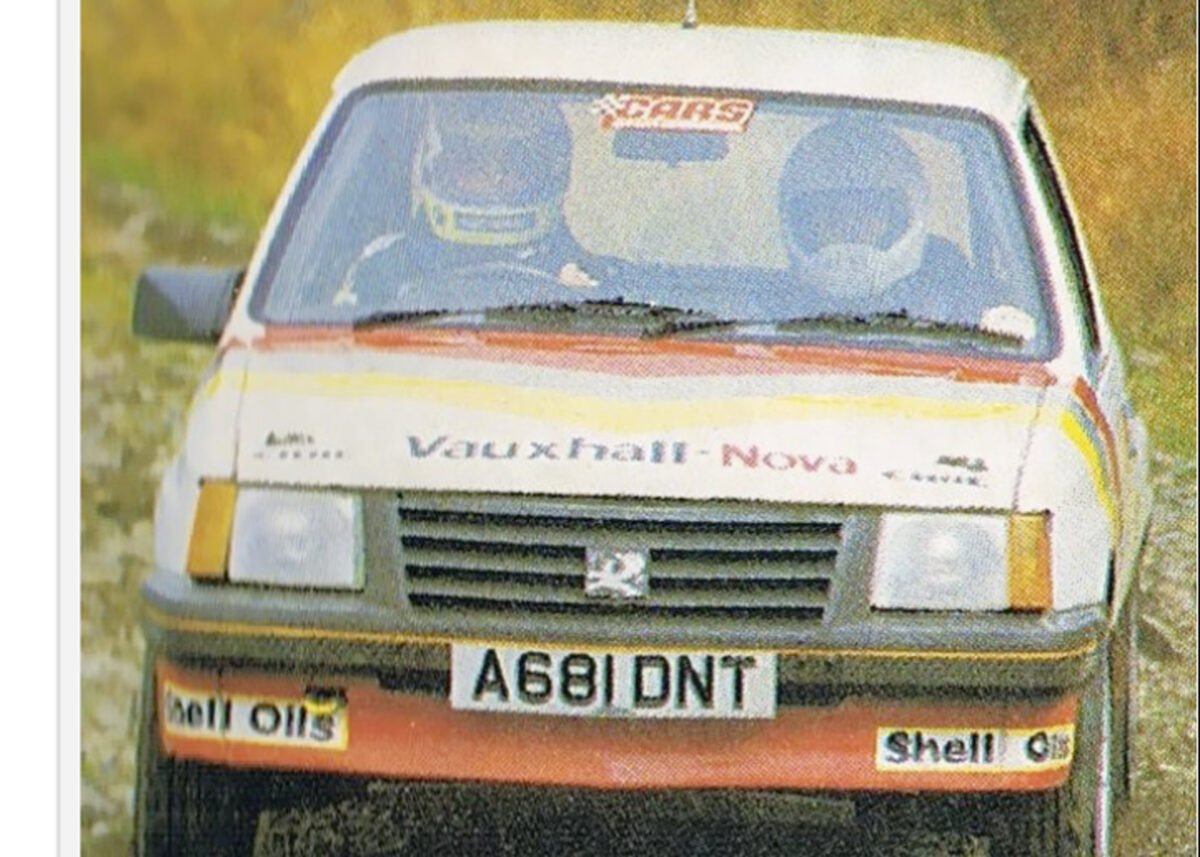 It was a friend of mine that told me that the Corsa and Nova was 40 years old this year he had been a big fan of the car all his life and has a beautiful original left hand drive Opel Corsa GT which is posing in the showroom window of the local Opel Garage in Donegal this last week or so Manor Motors. To celebrate the Corsa and Novas 40th birthday. On a Sunday morning, I got a chance to drop by and look in the showroom window. The 33 year old Corsa looks small by today’s cars including the latest generation electric version beside it.

Looking at the lines of the car from the rear quarter panel forward, this beautiful red shows them wee arches over powerful original wheels on this version, even them old Opel Vauxhall GM mud-flaps take you back to DTV Chevettes and Opel Ascona and Mantas and of course the Nova and Corsa. 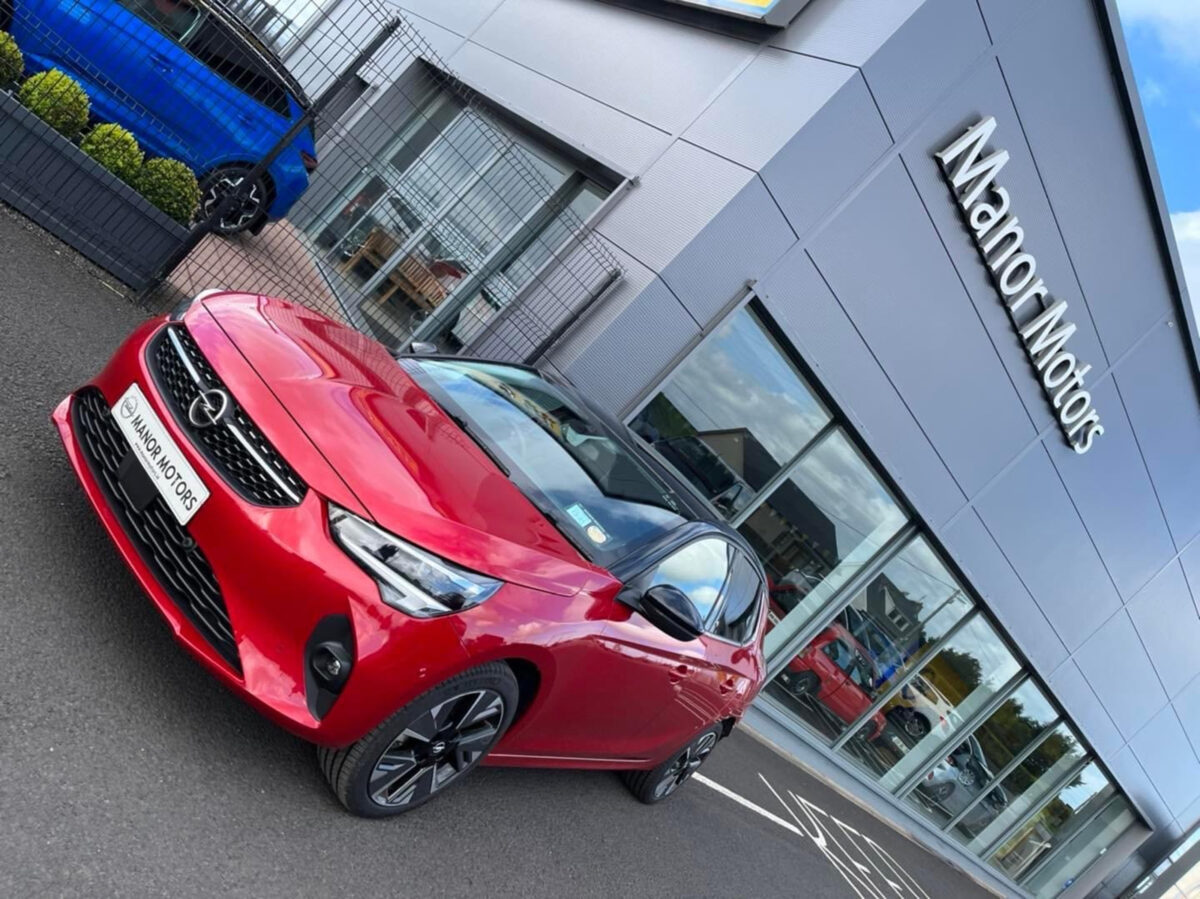 The present day generation of the Opel Corsa

Today’s Corsa is a lot more grown up looking, not a cigarette lighter to be seen, it’s USB and Bluetooth that replaced them old tapes and CDs, and a search on Spotify will have you back with the songs you remember touring around the town doing laps of Letterkenny, music bouncing the door speakers and the windows down.