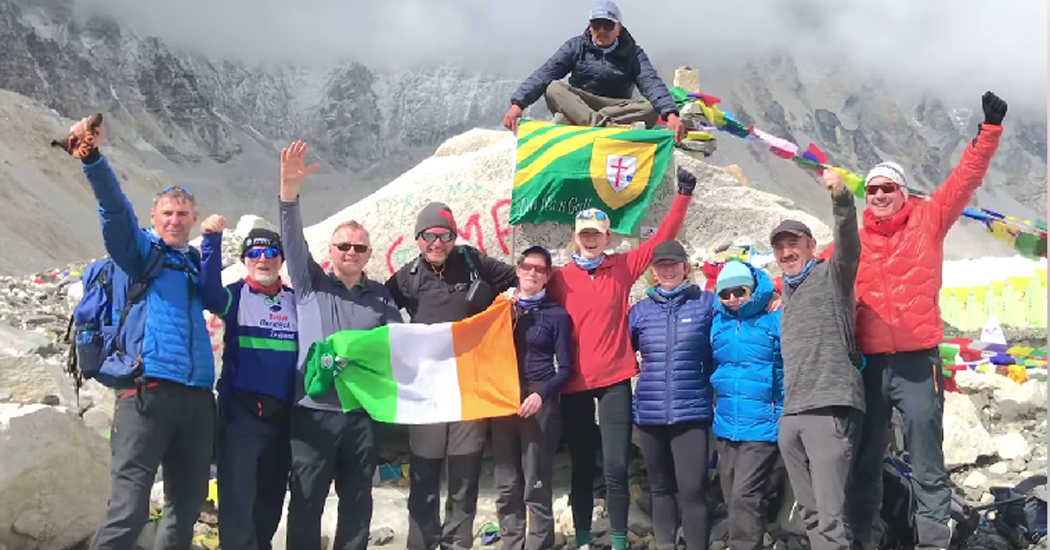 They did it! An adventurous group of Donegal people have reached Everest base camp today, climbing to an amazing altitude of 5,364 metres (17,598 ft).

The explorers took on the expedition of a lifetime this May with Letterkenny man and Mt Everest Summiteer Jason Black as their guide.

Setting off two weeks ago, after months of preparation, the team made steep ascents along the original 1953 route through sherpa villages. Climbing above the clouds and even above helicopter flight paths, they’ve finally reached the foot of the greatest mountain on the planet Mt Everest.

Among the team is Jason’s daughter Laura, Eamon Mc Gee, Michelle Healy and Jennifer Doherty. Buncrana woman Jennifer, who was born blind, is making the incredible feat with the support of the Donegal Centre for Independent Living Opportunity Fund.

Celebratory cheers of ‘Up Donegal’ rang out from the team as they reached their goal.

Posting from the camp, Black said the climb was emotional beyond belief.: “Mission accomplished what a team, what a journey, what a privilege.

“100% success every member of the team reached Everest following the original 1953 route to the highest base camp on the planet.

“We are all exhausted and we will get a proper update to you all in the coming days. We have been blown away by the support shown, messages sent, prayers said and kindness shared.”