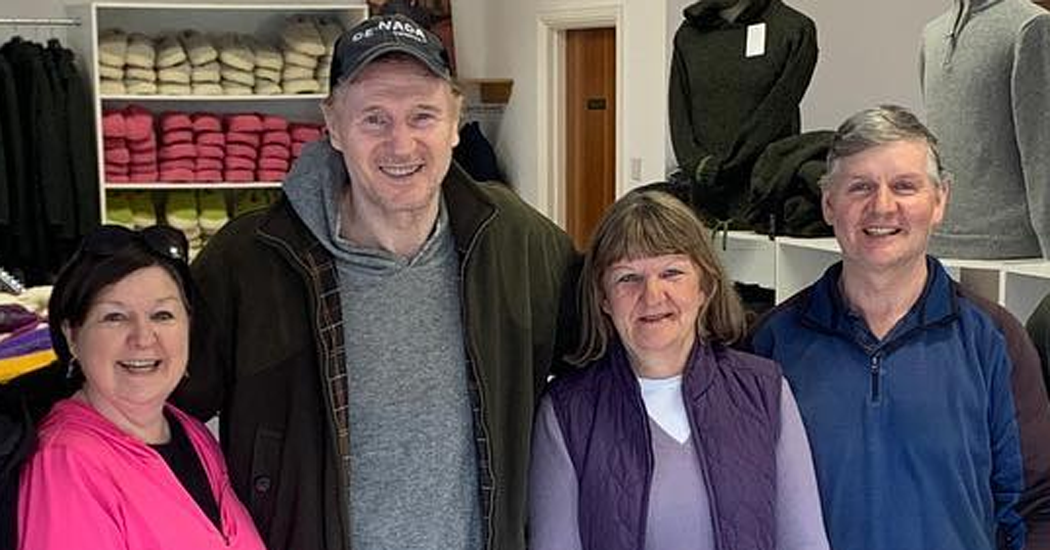 Hollywood may have arrived in the hills of Donegal, but the film stars of ‘In the Land of Saints and Sinners’ have also been sampling some of our local culture and tourism gems during their time away from the set.

Filming is continuing for the big budget blockbuster in south west Donegal, so you just never know where you’ll bump into a celeb these days!

Liam Neeson, Ciaran Hinds and Jack Gleeson have been spotted at some local spots in Glencolmcille, Kilcar and Carrick during their down time.

Being based in south west Donegal has given the cast and crew a chance to embrace some of the county’s most picturesque places and heritage.

Just yesterday, Liam Neeson took a shopping trip to Rossan Knitwear at the Glencolmcille Woollen Mill. Staff were “thrilled” to welcome their star customer, who happily took a photo with everyone.

Last week Carrick locals were delighted to share a few pints with none other than Ciaran Hinds. The Oscar-nominated ‘Belfast’ actor called into Evelyn’s Central Bar where he was greeted by the delighted staff and Clg Naomh Columba ladies.

Set in the 1970s in a remote Irish village, In the Land of Saints and Sinners follows a newly retired assassin who finds himself drawn into a lethal game of cat and mouse with a trio of vengeful terrorists. The film sees Neeson reunited with The Marksman director Robert Lorenz.

Filming has been taking place in locations across south Donegal such as Glencolmcille, Ardara and Kilcar.

Netflix has already snapped up the film for UK and Irish audiences.