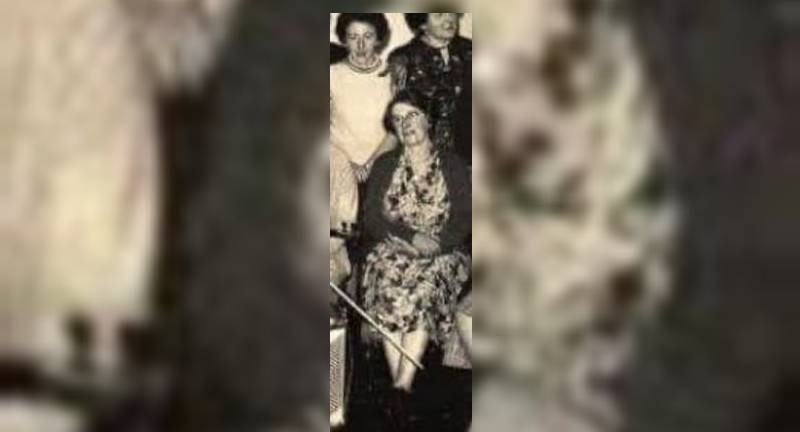 written by Brian McDaid May 18, 2022
Facebook0Tweet0LinkedIn0Print0

Madge was our photographer on the day. I always thought the picture was taken on the day of my first holy communion, but years after, this single photo is now lost forever.

The memory of it is not taking up space on a computer but only in the back of my head. My father never stood in for a single picture with any of us 4 boys, that was just him.

Madge was the barmaid in Nellie McGoverns, my fathers pub for going for a drink. There was a high kerb outside Nellies pub at Lower Main Street.

Over the years the pub changed its name from The Cavern, to McCafferty’s, to its present name, Sonny McSwines.

When it was Nellies, the footpath was lower than the Main Street and it was another few steps down into Nellies pub and then a ramp took you down into the lounge behind that.

I still can hear the Cavan accent of Nellie McGovern calling ‘gon get a picture of the boys there Madge’ Two of us, me and Nelius, were marched out onto Main Street and both of us stood up on the high kerb outside Nellies.

In my memories I can see the black marble effect tiles on the front and the name ‘McGovern’ running across the front of the pub.

Nelius and I were pictured in two short trouser suits standing outside Nellies that day. The fact that both of us were suited out would suggest that it was Nelius’ first communion day and I was wearing my first communion suit from the year before.

The photo was in our house for the longest time but I haven’t seen it since my father passed away over 30 years ago in 1990. I find myself recalling this image especially around this time of year when first communions are taking place.

Our auntie B played a big part in preparing us for our first holy communion.

She had a very strong faith and was going to make sure that her younger sister Mary Ellen’s (who had passed away the year before), children were prepared to receive their first holy communion when all four of us came of age.

Auntie B was also in charge of the ‘The First Communion Rigs’. My outfit was a wee suit complete with short trousers.

A good few weeks before the big day I was down at Auntie B’s for a ‘try on’, adjustments we made and a few days later I was back down to try on the trousers again.

Everything was going well and Bida sent me down to get the messages and when I landed back someone had landed into Bida for a sprain string which she had a cure for.

Bida was having a yarn and a friend of mine, Martin McElroy, also making his first communion that year. He was heading away with a ball, to play in the field across the road (before it was turned into the P&T yard.) I went over to see him forgetting that I still had my new first communion trousers on.

Just my luck I slipped and fell into a big swamp that was over a big tree at the bottom of the back gardens of Plunkett O’Boyle Terrace. Bida was saying goodbye at the front door to her visitor as I was slowly walking across the Back Road covered in muck.

Bida just opened the door a bit wider to let me past her. I was expecting to get a telling off but her silence was more frightening.

It wasn’t long until Bida had me all cleaned up and the new suit trousers were washed and no one was the wiser when the big day arrived.

A year later the picture of me and my brother was taken outside Nellie’s. The old picture reminds me of what wasn’t in that picture, that day all five of us were down in Nellies after Nelius made his First Holy Communion. We spent most Saturdays down in Nellies with my father.

Red Formica table tops and a matching small high bar counter over by the window outside the toilets.

In Nellie’s, my father always sat in the same seat inside the door, Nellie would have thought nothing of asking someone to get up when my father came into the bar ; ‘You’re sitting on Fred’s seat there get up’.

Perri cheese and onion crisps was the nearest thing to bar food in those days. Salt and vinegar wasn’t even an option, McDaid’s Banana by the neck with a straw was the favourite of us ‘wains’ huddled all around one of them old red formica tables, that was our meal out.

On first communion days you could hear the rattle of coins in the pocket of our wee suits, afraid they might burn a hole in pocket of them.

A good few trips we made up to Bella Clarke’s shop where we would blow out and buy the dearest box of crayons, the oil based ones not them old wax ones that wouldn’t draw.

A jotter and tear out the pages from the centre and draw ESB lorries just like daddy drove. We sat quietly in the bar sometimes trying to cover a fit of giggling if one of us rifted.

Every so often daddy would quietly say to us ‘we’ll go after this next one boys’ for daddy that was another half and a bottle with a jug of water for his whiskey. A bottle of phoenix was his favourite beer, then his 20 Major, matches and ash tray.

Years after that lost photo of me and my brother on my his First Communion Day still flashes through my memory, Daddy never went into photos, but would often take out old photos especially of his wedding day and feel sad about the cards that life had dealt him.

They say a picture can say a thousand words and that was case in our house growing up, Madge’s photo of us was one of them lost on paper but still etched in the memories.

Brian McDaid: A picture in words was last modified: May 18th, 2022 by Brian McDaid
Facebook0Tweet0LinkedIn0Print0