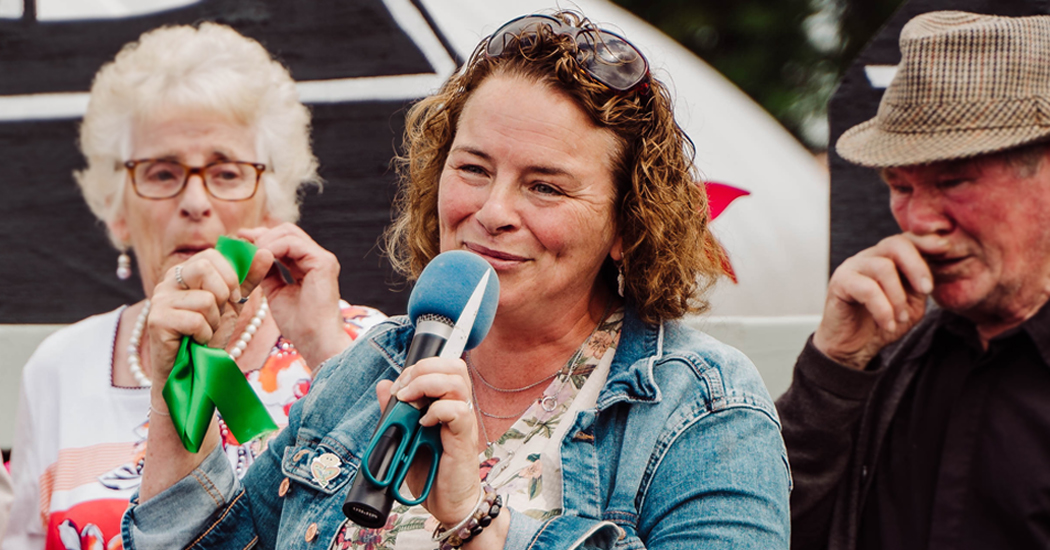 Geraldine Mullan nominated as one of Ireland’s unsung heroes

Moville woman Geraldine Mullan has been nominated as a ‘Queen of Kindness’ in the 2022 RSVP Awards.

Geraldine, who lost her husband and two children in the Lough Foyle tragedy, has been recognised in the Unsung Heroes category of the popular national awards.

Geraldine has made a major impact on her local community in memory of her beloved husband John, son Tomás and her little girl Amelia. Their lives were cut short when the family’s car plunged into Lough Foyle one fateful night in August 2020.

Last August, on the first anniversary of the tragedy, Geraldine opened the Mullan HOPE Centre in her adopted town of Moville. The community centre is a  ‘hub of positive energy’ and a special place for young and old to gather and hold classes, events, festivals and a farmers market.

Geraldine said it was a “beautiful surprise” to learn of her nomination in the RSVP Awards on Friday.

She added she was “humbled and honoured” to be nominated as one of ten finalists.

A native of Galway, Geraldine works as an Acute Oncology/Haematology Clinical Nurse Specialist in Letterkenny University Hospital and is highly regarded by colleagues and patients alike.

RSVP magazine said: “In the face of adversity some people can become a true inspiration to others! Our unsung hero Geraldine is an epitome of love, kindness, compassion but most of all her innate beautiful character of heartfelt openness and strength has been truly inspiring to people of her community and further afield.”

The winner of the Unsung Hero Award will get to enjoy a weekend stay in Kildare worth €1,400, including tickets to the National Stud and Japanese Gardens, a behind-the-scenes tour of the Curragh Racecourse and a personal shopping experience at Kildare Village Outlet.

Voting is now open until 31st May at https://www.rsvplive.ie/life/rsvps-unsung-hero-vote-king-27008994

Geraldine Mullan nominated as one of Ireland’s unsung heroes was last modified: May 23rd, 2022 by Rachel McLaughlin
Facebook0Tweet0LinkedIn0Print0