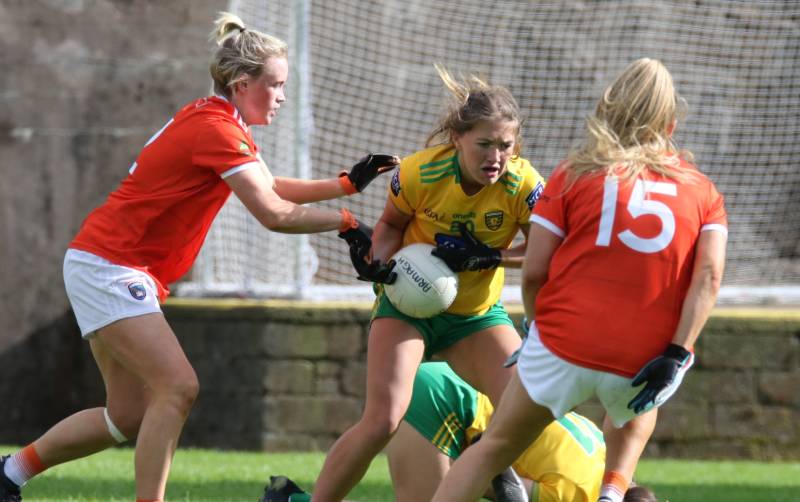 written by Dáire Bonnar May 22, 2022
Facebook0Tweet0LinkedIn0Print0

Donegal Ladies suffered a late blow as they were defeated by a point against Armagh in the Ulster final.

A late Kelly Mallon goal gave Armagh the win as they took the lead for just the first time in extra-time.

Donegal looked like winners as they were four points up in normal time with minutes reamaining, but Aimee Mackin scored a vital goal before Mallon scored a free to take the game to extra-time. 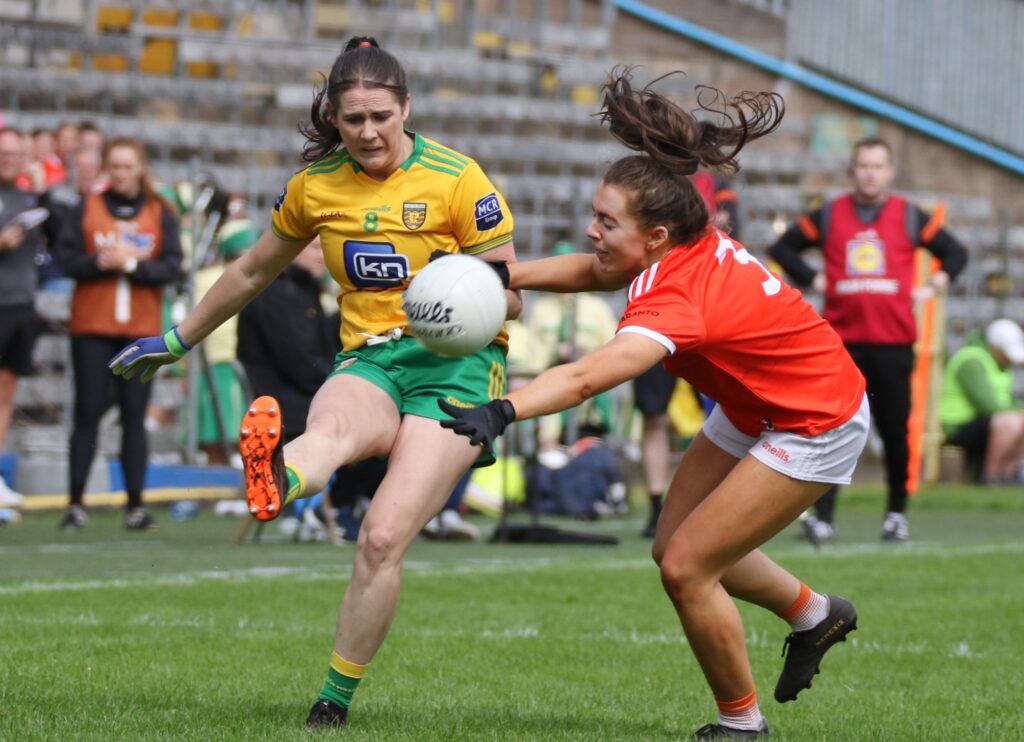 Geraldine McLaughlin scored 1-11 for Maxi Curran’s side, while Niamh McLaughlin got the other Donegal goal.

Donegal had a brilliant start as Geraldine McLaughlin scored a goal within a minute but it didn’t take long for Armagh to come back.

A Kelly Mallon free followed by a Catherine Marley point from play got Armagh within a point. 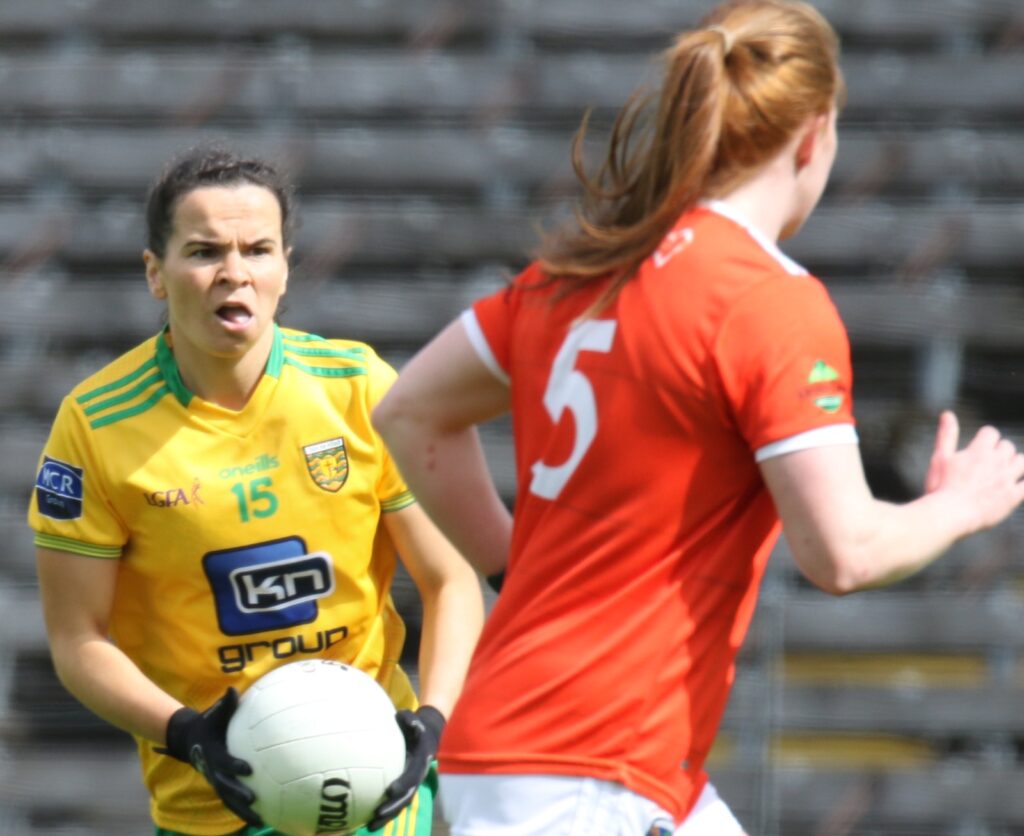 After just five minutes, Armagh scored a goal after an error in defence from Donegal gave Aimee Mackin the ball and she found Aoife McCoy with the chance to score and the Armagh forward took her chance.

Donegal weren’t phased by the goal however as Geraldine McLaughlin free and a Niamh McLaughlin point from play had the sides level again.

McCoy and Geraldine McLaughlin scored from play and a Mallon free had Armagh ahead again at 1-4 to 1-3. 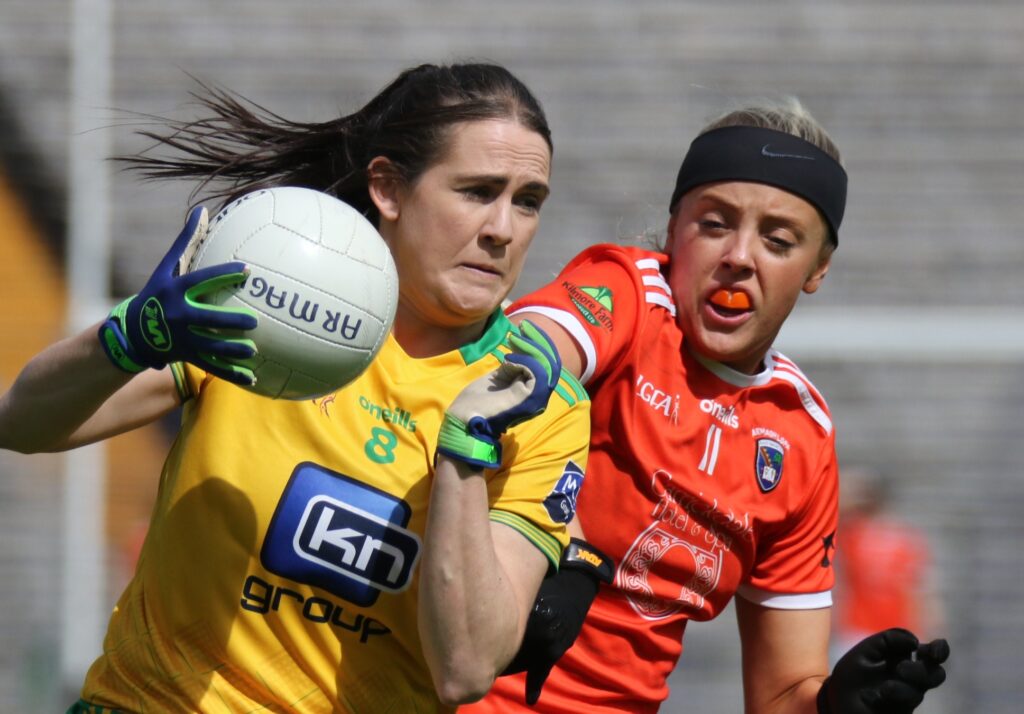 A Caroline O’Hanlon point from play and a Mallon free from play had Armagh three points up after twenty minutes.

But Donegal would soon turn the score around as Geraldine McLaughlin scored a free then Niamh McLaughlin side stepped her marker and fired the ball into the top corner to give Donegal the lead after a good piece of play.

Mackin got her first point from play and Niamh Hegarty got Donegal ahead again but the sides went in level at the break at 1-8 to 2-5  as McCoy pointed just before half-time was called. 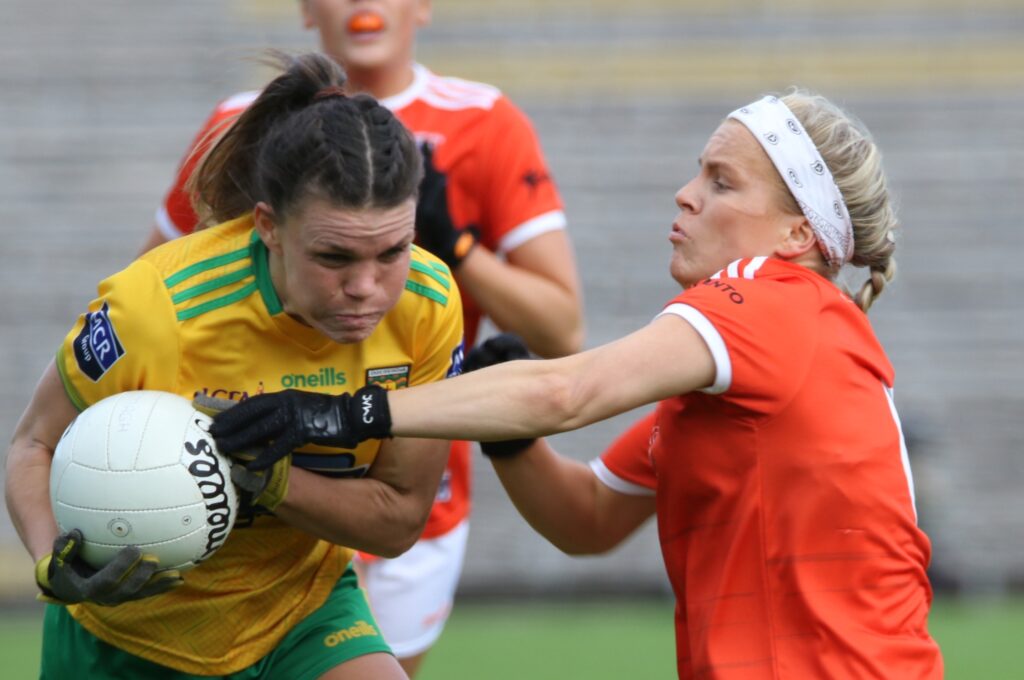 Donegal started brightly in the second half as half-time sub Karen Guthrie scored from a free early on and Geraldine McLaughlin scored after a good bit of play from Maxi Curran’s side.

Mackin levelled for The Orchard County with two good scores on her left foot.

A Mackin free had Armagh ahead but it didn’t last long as Guthrie got her first point from play. 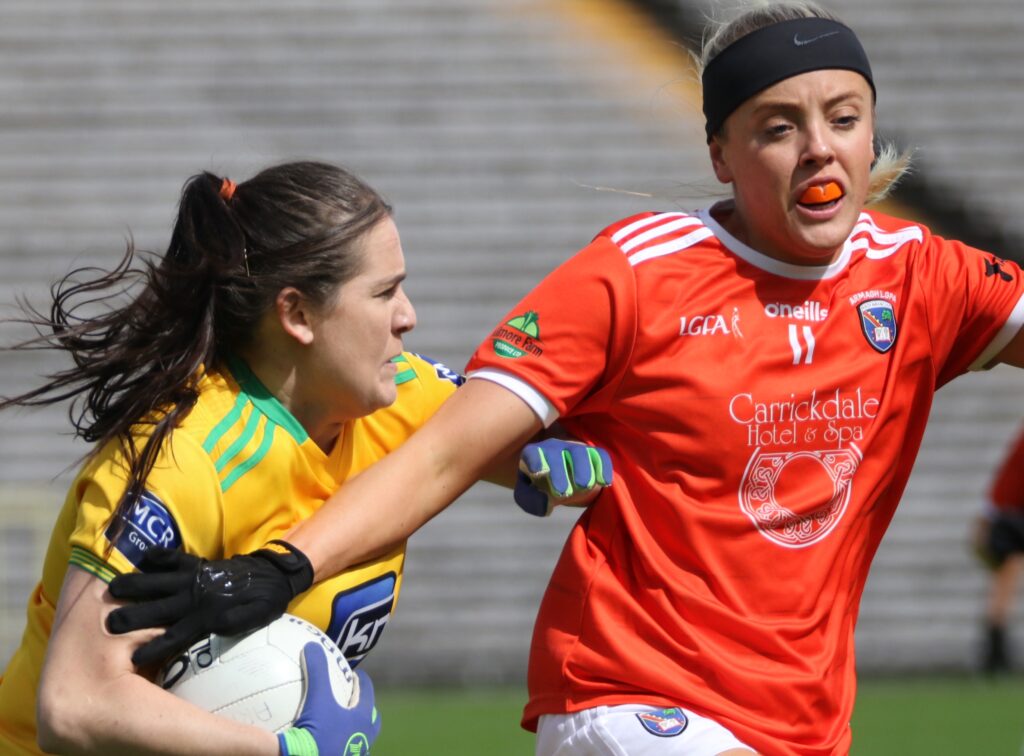 Geraldine McLaughlin then capitalised on a defensive error but Mallon scored her fourth free of the game to level once again.

It was Geraldine McLaughlin again who scored a brilliant point before scoring two more frees as Donegal looked to get away from their opponents.

A brilliant score from Yvonne Bonner and another McLaughlin score from a tight angle was separated by another Mackin free as Donegal looked to have sealed victory. 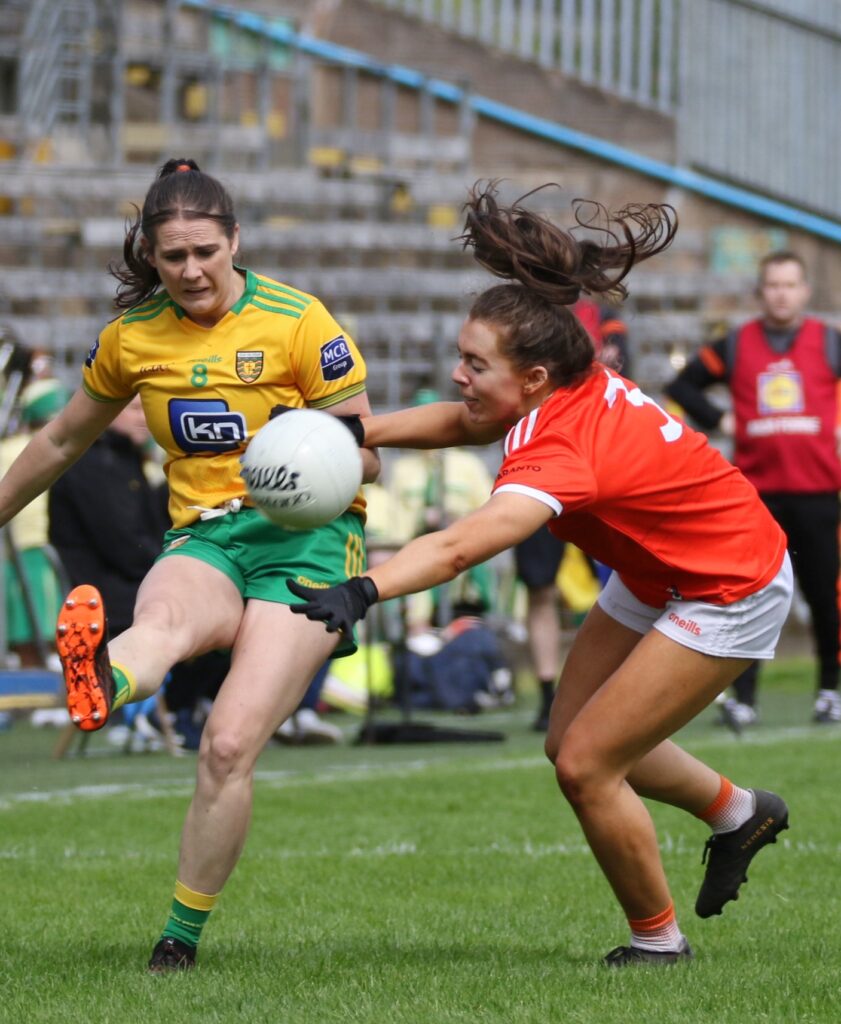 A Guthrie free and a Niamh Hegarty point had Donegal two points ahead in a tense extra-time and Guthrie again pointed for Donegal while Mallon got Armagh’s only point of the first half of extra-time as it stood 2-17 to 2-15. 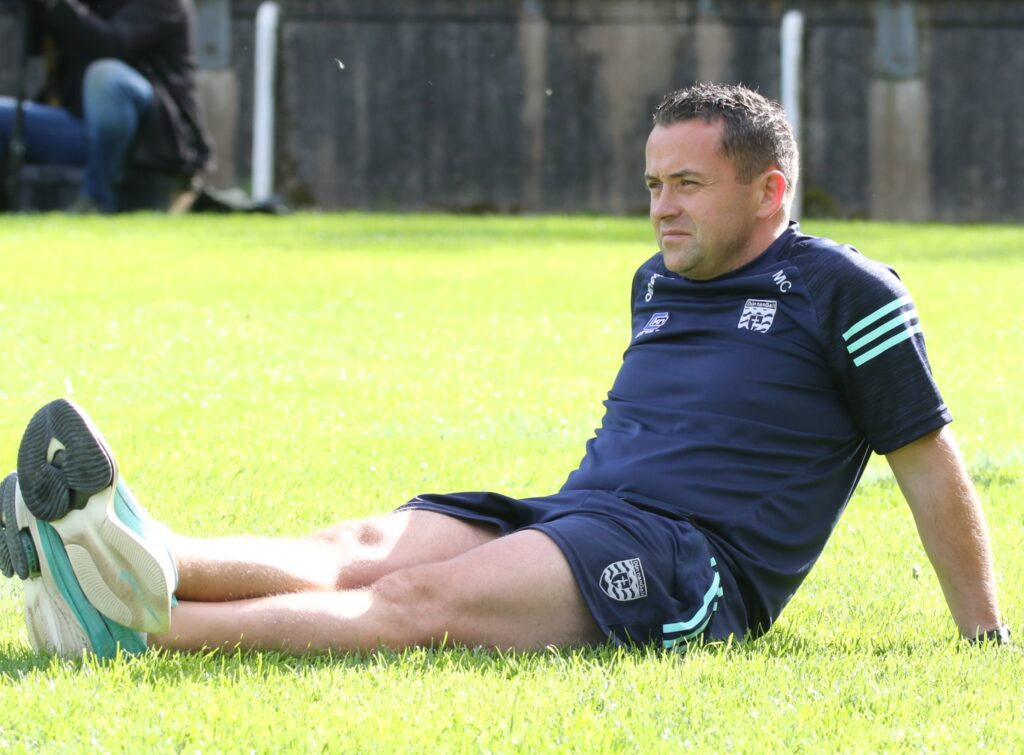 Geraldine McLaughlin quickly pointed in the second half but Mallon scored another free as Armagh weren’t letting their opponents away.

Nicole McLaughlin then found her sister Geraldine to restore the three point lead but once again a Mallon free kept Armagh in it. 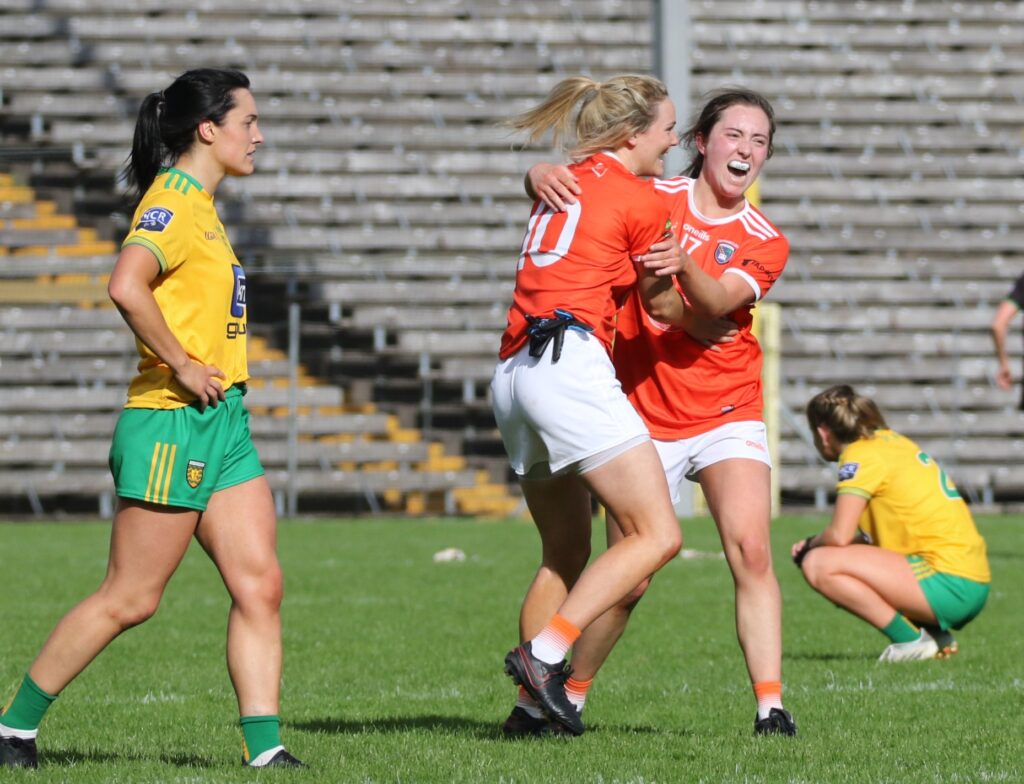 Kelly Mallon then scored a goal with less than two minutes to go to give Armagh the lead for the first time of extra-time and Donegal couldn’t find a leveller as Armagh won three in a row.