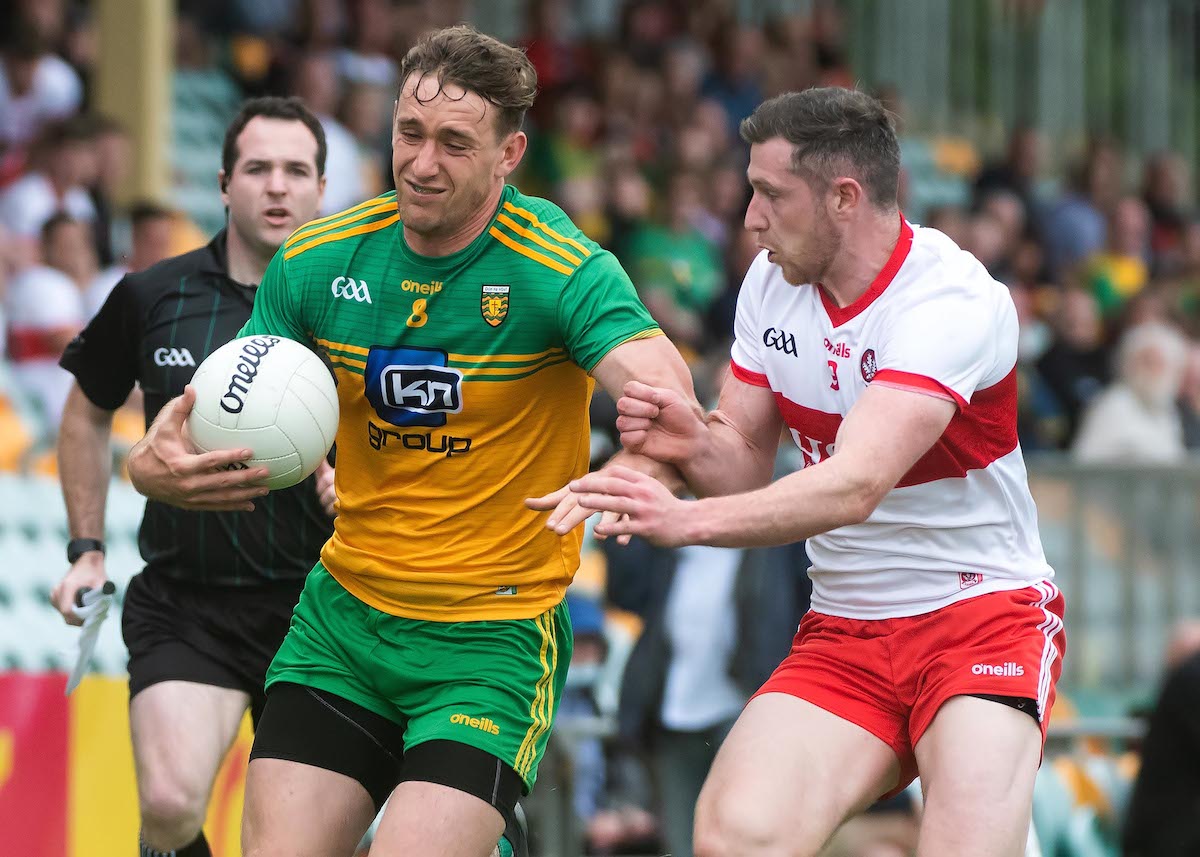 Donegal hoping history stays on their side this Sunday

Donegal will be hoping history continues to favour them when they face Derry in Sunday’s Ulster SFC Final.

Donegal have had the beating over their rivals in the Ulster Championship in recent years, not losing to The Oak Leaf County since 2008.

In preparation of Sunday’s final, we looked back at some of the classic encounters between the two teams in the battle to win the provisional title.

Donegal have enjoyed a spectacular record in the Ulster Championship at MacCumhaill Park, not losing there since Down beat them in 2010, with Tyrone defeating them in the Super 8’s in 2018.

But this game 10 months ago they received a scare in front of a limited crowd of 500 due to covid restrictions. 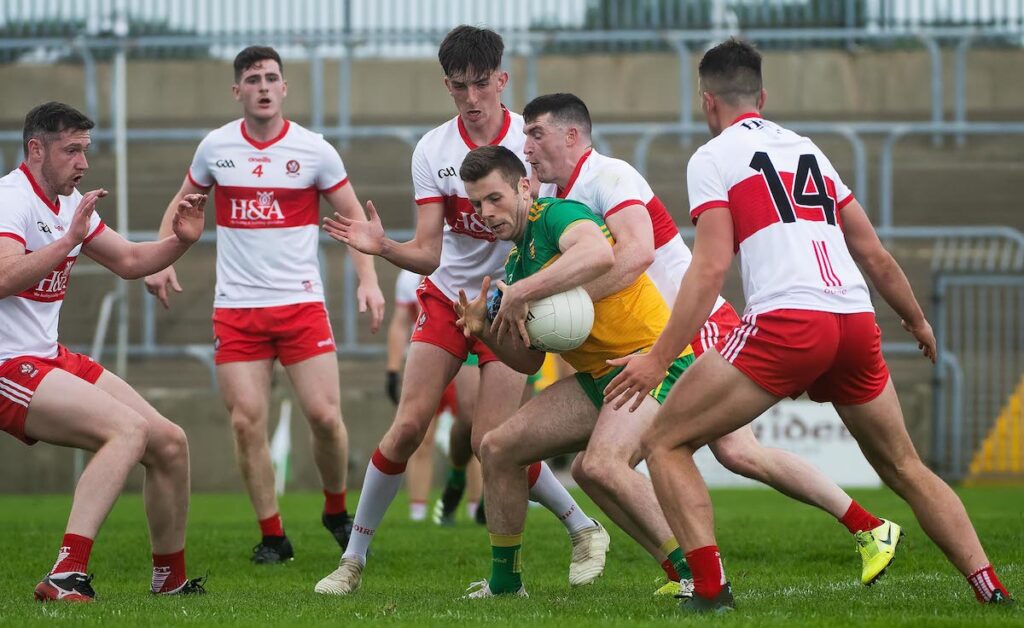 Whether it was not having the backing of the fans or it was an early sign of Derry’s resurgence under Rory Gallagher, it was a game that had Donegal fans watching on TV biting their fingernails.

An unbelievable score from Patrick McBrearty that not many would dare take on, in the last seconds of added time gave Donegal the lead for the first time in the game, and the win.

Michael Murphy was a substitute and came on as Donegal were three points down with 15 minutes to go but they slowly clawed back the deficit and two McBrearty points in added time gave them a narrow victory.

It would be the furthest Bonner’s side would get however, as Tyrone would go on to beat them in the semi-final before winning the Ulster and All-Ireland titles.

Once again Patrick McBrearty starred, but this time it was for the quantity of points scored rather than the quality.

The Kilcar man kicked eight points, five of them from play, as Donegal won by two goals at Celtic Park.

Donegal wasted no time getting ahead as Leo McLoone pointed twice while Michael Murphy and Jamie Brennan scored 0-1 each inside the first ten minutes. 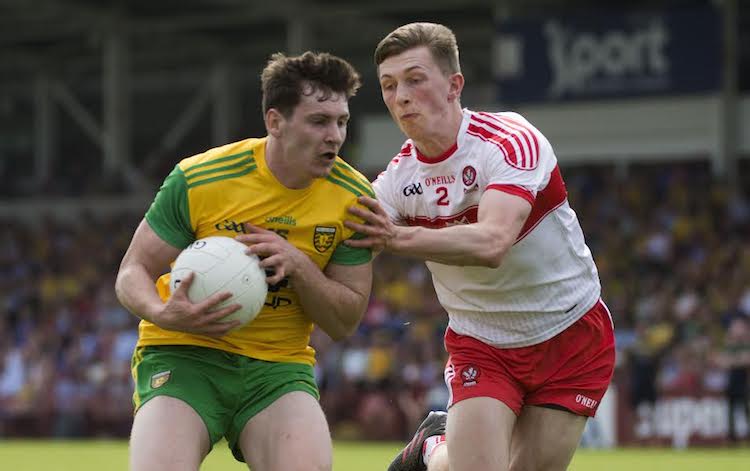 Hugh McFadden’s goal after 12 minutes had Donegal 1-4 to 0-1 as Derry never had the chance to settle.

Donegal were six points ahead at the break and while Derry tried their best to stay in touch, a Cian Mulligan goal made sure Derry were dead and buried.

Donegal would go on to win the Ulster Championship in Declan Bonner’s first season of his second stint in charge, defeating Fermanagh in Clones by 2-18 to 0-12 points.

Donegal would however lose the final game of the inaugural Super 8s to Tyrone in MacCumhaill Park as they failed to qualify from the group to reach the semi-finals of the All-Ireland.

A more tense affair between the two sides at Clones saw Donegal just about reach their fifth Ulster final in-a-row.

The sides were level 0-5 apiece at half-time and ten minutes into the second half, the vital score came which saw Donegal go into a five point lead.

Sean MacCumhaills man Marty O’Reilly gave Donegal a 1-8 to 0-6 lead that they were happy hold on to, but Derry came back at them and closed the gap to two points.

They couldn’t get any closer or find a much needed goal however, as Donegal moved into another Ulster final but this one ended in defeat to Monaghan.

After a heavy defeat to Mayo in the 2013 All-Ireland quarter-final and division 1 relegation, Donegal had a point to prove in 2014.

Winning Division 2 and returning to the top league, they then made the short journey to Celtic Park for the beginning of the Championship, but it wasn’t much of a convincing win.

Jim McGuinness’ side were 0-6 to 0-4 down at half-time but with the wide on their side in the second half, the lead quickly changed hands.

Martin McElhinney got a quick point back and McLoone’s goal five minutes into the second half gave Donegal a three point lead.

The would be Ulster Champions held on for the win with patient possession play and solid defending, as they were so famously or infamously known for in this era under McGuinness.

The second game of Donegal’s famous journey to winning the Sam Maguire for just the second time saw Derry fall to the reigning Ulster Champions.

Having beaten Cavan by six points in the preliminary round, Donegal continued to go from strength to strength as they easily disposed of The Oak Leaf County.

A more attacking brand of football than 2011, Donegal were still rigid in defence and frustrated all that played them.

McLoone’s first half goal had McGuinness’ side 1-6 to 0-4 ahead at half-time, and 10 minutes into the second half, Colm McFadden’s strike hit the back of the net.

A real team performance with Donegal having nine different scorers, saw them make their way into the semi-final.

A facile win over Down in the Ulster final followed by an All-Ireland final win over Mayo saw Donegal win their first Sam Maguire in 20 years.

A first Ulster Championship win since that 1992 All-Ireland winning side saw the Jim McGuinness era begin with success.

A 21-year-old Michael Murphy scored the only goal of the game from the penalty spot while Colm McFadden scored four points as Donegal kept Derry to five scores from play.

The two sides went in 0-5 apiece at half-time but minutes into the second half, Murphy was fouled and converted his penalty.

A 0-8 to 0-6 defeat to Dublin in the All-Ireland semi-final followed, which had pundits and journalists across the country blasting Donegal’s style of play.

Donegal hoping history stays on their side this Sunday was last modified: May 27th, 2022 by Dáire Bonnar
Facebook0Tweet0LinkedIn0Print0