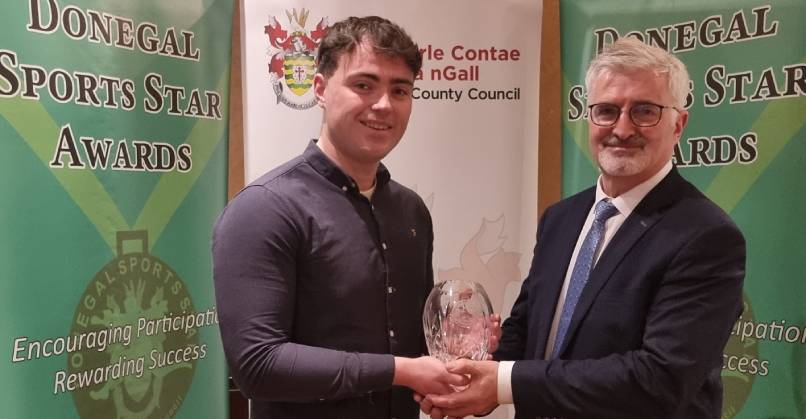 Watch: James Boyle aims for success for remainder of 2022

written by Dáire Bonnar May 28, 2022
Facebook0Tweet0LinkedIn0Print0

James Boyle is looking to build on last year’s success and go one step further with club and country in 2022.

The Dungloe man plays for Bohemians and the Ireland Amputee football side and has success in his sights at both levels.

James was the winner of the Para-Athlete award at the Donegal Sports Star Awards in the Mount Errigal Hotel on Thursday and was delighted to pick up the award for a second time, winning it back in 2012.

James was a member of the Republic of Ireland team that reached the quarter-final of the European Amputee Football Federation Finals in Krakow last year. James scored a hat trick in a group stage game against Belgium, including a brilliant third goal which went viral.

🙌 James Boyle scored a hat-trick for Ireland as they beat Belgium 8-0 at the European Amputee Football Championships today.

🤯 This was his third goal. Wow.pic.twitter.com/IIQ30FRm4m

He also netted the winner against Germany which saw them qualify from the group stage.

But in 2022, his Bohemians side are currently top of the league and have won every game so far, and is hoping for the chance to play against Europe’s best.

James, after picking up his award on Thursday, said: “The goal is to win the league and try win the cup and hopefully qualify for the Champions League next season.”

After being knocked out by Turkey in the quarter-finals last year, James is hoping to reach a similar stage with his country, and go one step further than they did at the last World Cup when losing in the last 16.

“Training most days and keeping on top of things, the goal for the World Cup now is to try and push on from where we ended in 2018.”

Watch: James Boyle aims for success for remainder of 2022 was last modified: May 28th, 2022 by Dáire Bonnar
Facebook0Tweet0LinkedIn0Print0