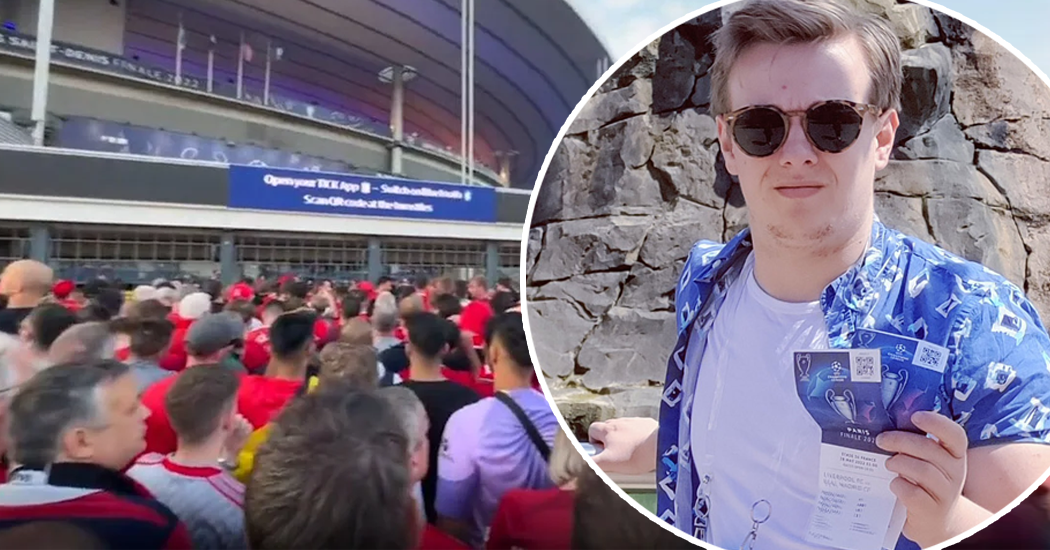 A young Donegal man has spoken of his Champions League final ordeal after being tear-gassed by French police and refused entry to the match despite having a ticket.

Robbie McLaughlin, from Moville, found himself caught up in the chaotic scenes at Stade de France on Saturday night.

He says the organisation outside the stadium was shambolic, while the “heavy-handed” French police added to the disturbing atmosphere with their indiscriminate use of tear gas on supporters.

The 24-year-old Liverpool fan had travelled to Paris to watch his beloved Reds with girlfriend, Emma Gibson, from Newtowncunningham. It was the young couple’s first foreign holiday together.

But what should have been a dream trip – to one of the world’s great cities for a showpiece final – suddenly turned into a frightening ordeal, as Robbie explains.

“When we got to the stadium there were a lot of people congregated at fences where the police had blocked everyone’s path. We found the person we were supposed to meet up with and he told us that they were refusing entry to ticket-holders because they had allowed too many people to sneak in.”

“A man I was with was trying to reason with the police to let us ticket-holders in. But then me and Emma began to cough and I started to smell something funny. I said to Emma that it was tear gas and we should back-up. Just then a group of local youths ran out of the tunnel beside the gates when they were charged by police.”

“The police at the barricades reacted towards fans who were not involved and then fired tear gas or a flash bang device directly at our feet. There was a stampede of people running and more tear gas.”

Robbie says the riot police were targeting anyone in the vicinity, including innocent fans stuck in the queues.

“Randomly the police would start firing tear gas at the crowd. Some elderly men walked passed us after being pepper-sprayed. I attempted to film the heavy-handed police response but they rushed up to tell me to stop filming and covered my phone.”

“We had to stand further back from the fence because of tear gas rushes and being rushed by police.”

He says all thoughts soon turned to self-preservation, rather than the football match.

“I didn’t get to see any of the match as my priority was getting myself and my girlfriend to safety.”

Robbie, who has been to three previous Champions League finals without incident, says the atmosphere in the city was fantastic but everything quickly soured the closer you got to the stadium.

“The atmosphere in the city was great, a very fun atmosphere. The locals were very friendly and helpful to us and very forthcoming in talking about the match.”

Having been delayed in their flight from Dublin on Saturday morning, Robbie and Emma headed for the match at around 7.30pm, ninety minutes before kick-off.

“When we arrived I started to get a sense of the bad atmosphere. The ticket machines were turned off or malfunctioning so that people couldn’t get through. This caused hundreds of people to start jumping over the turnstiles or breaking them to get through.”

“We finally got through as someone broke the turnstile in front of us and we walked through so we could walk to the stadium.”

However things went from bad to worse then.

‘Trying to get away from the chaos’

Robbie says Liverpool fans did not cause the trouble however.

“I think it’s important to outline strongly that the people who were committing illegal acts at the stadium, including robbing, rushing police, climbing fences and sneaking into the stadium were all local gangs of youths, with no jerseys or evidence they were in fact fans or ticket holders.”

“The police would then unfairly attack the fans for their actions. It was evident these groups were entering through Liverpool’s section as it was the closest section to where you get off at the Stade de France train station. That’s why I don’t think these groups were rushing in the Madrid section.”

Robbie is now very annoyed that their trip was ruined and that they have been left out of pocket.

“This was me and Emma’s first holiday away and her first match, but it has been ruined by the lack of planning, care and respect shown by organisations involved in the match preparations.”

“We didn’t even get to watch the match on TV, as we were trying to get away from all the chaos. It’s very annoying to think that we spent all that money to travel to France.”

He is now hopeful of a refund for his unused final tickets and has another souvenir from the weekend too.

“I have tried emailing regarding this [a refund], but I’m not sure who would be responsible.”
“At least I have a projectile they fired at us as a souvenir.”

Meanwhile Robbie’s dad Gerry believes the game should have been postponed, with genuine fans being caught up in such turmoil outside the ground.

“No Liverpool team should ever start a football match ever again while their fans are being battered and gassed outside the stadium while trying unsuccessfully to get in on a valid ticket. That should apply to all teams from these isles.”