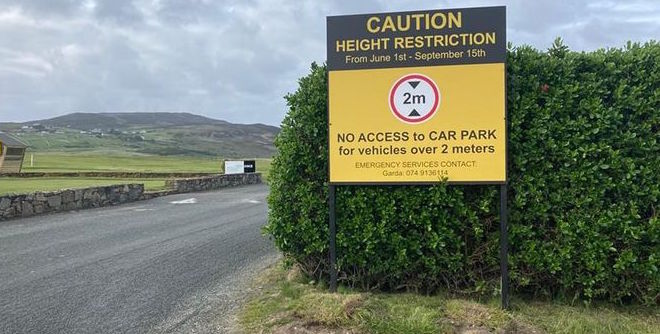 Donegal County Council has erected a number of height restriction barriers at some of the county’s most popular beaches in a bid to cut down on camper vans overusing the facilities.

The new height restrictors at Kinnegar, Killahoey and Shrove will come into effect today and last until September 15th.

A spokesperson for the council defended its decision saying the car parks at the beaches have limited spaces and should be allowed to be enjoyed by everyone including day-trippers.

It follows a recent study on Caravan Camping and Camper Vans undertaken on behalf of Donegal County Council to examine problems at the county’s beaches.

It showed inappropriate parking at beach car parks leading to obstruction of access was the biggest headache for the public.

The spokesperson said “In recent years these car parks have become increasingly popular with campervans and caravans, however, they have limited parking spaces available and run the risk of being overwhelmed when disproportionate numbers of campervans and caravans spend prolonged periods of time at these locations.

“This situation also puts an undue strain on the services available at the beach such as, water, waste disposal and recycling, parking and water safety that are provided in compliance with the Blue Flag requirements and thereby can put the Blue Flag status of the beach in jeopardy.

“In addition, day trippers intending to spend a few hours on the beach are often displaced.”

Overwhelmed facilities were outlined as the second most common issue experienced by respondents to the survey of Caravan Camping and Camper Vans.

Meanwhile, the council spokesperson explained that the height barriers at the beaches will not be locked but the option is there if required.

The spokesperson added “The height restrictors in Dunfanaghy and Shrove remain unlocked and the car parks available for everyone to use and enjoy the beach. However, the barriers allow the option, should this be necessary, to restrict access to day-trippers only.”