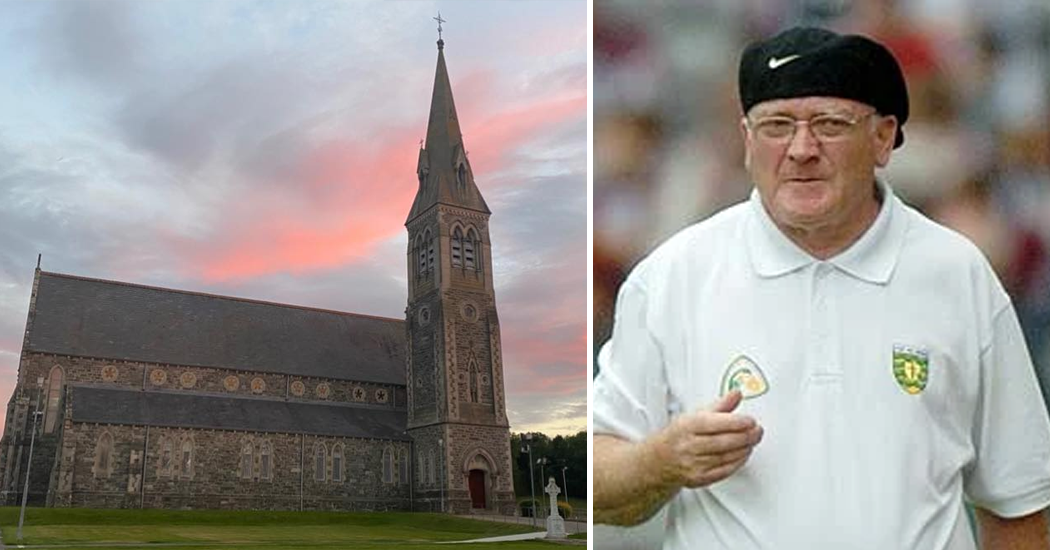 The funeral of former Donegal hurling manager Eamon Campbell has heard how important family was to him and how he was determined to attend his daughter’s wedding on Saturday, before passing away.

The former Donegal senior hurling manager passed away peacefully on Tuesday the 7th of June, surrounded by his family.

Fr. Patsy Arkinson remembered Eamon as a man who loved his family and faith and although he was faced with his illness, “he never became an angry man”, confident that his wife Kathleen, who he described as the anchor to their family, will be there for everyone during the difficult time.

Mementos that were of special importance to Eamon were brought to the altar at the start of the mass, including Donegal, Antrim and Derry jerseys, as he hailed from Loughgile and Maghera respectively, as well as two photos of him and his children and grandchildren.

Fr. Arkinson told the congregation of how heart-breaking it was to see Eamon struggle up to the altar on his daughter Clare’s wedding day on Saturday but how he wanted to witness the special occasion and to officially accept his new son-in-law into the family.

He spoke of Eamon’s love for Ireland, the culture, games, and how he “brought humour and smiles to people’s faces.”

He also said that Eamon was respectful to people of other religion, convictions, sports and politics.

“Eamon, in a nutshell, believed in tolerance and inclusivity,” he said.

The congregation laughed as a story was told of how Eamon had failed his NCT three years ago, was told to fix up the car and re-test later. Eamon did not fix up the car but when it was re-tested, he miraculously passed.

Eamon’s son Kevin gave a touching eulogy speech, where he expressed how thankful and appreciative his father would have been to see everyone in attendance and jokingly apologised to hospital staff for any post traumatic stress he might have caused them.

He said how his father had many titles in his lifetime, from comrade to manager and coach but the one that he was most proud of was ‘father’.

“Do not cry because Da’s life is over, but smile because it happened,” he said as he ended his eulogy.

Setanta Hurling Club led a guard of honour for Eamon, where he was heavily involved with over a number of years.

The club described him as a loyal family man, gentleman, legend and a “man that carried his heart on his sleeve”, as they extended their sympathies to his wife Kathleen, his children Mark, Paul, Maeve, Kevin, Clare, grandchildren and close friends and family.

Eamon held the role of manager of the senior Donegal hurling team from 2006 until 2009, when he guided them to their first Nicky Rackard Final in 2006.