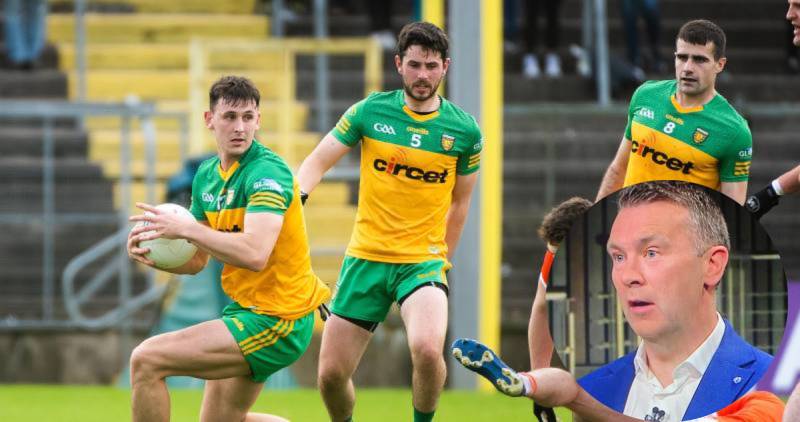 Oisin McConville: Donegal downed tools in the second half

Oisin McConville believes Donegal downed tools after going six points down and were out of ideas as Armagh cruised into the All-Ireland quarter-final.

Armagh won by 3-17 to 0-16 as they dominated the second half, with Donegal only scoring once in 34 minutes between the end of the first half and they start of the second half.

Speaking on the Sunday Game, the Armagh legend said: “I would say they hurt a lot by the fact they didn’t win the Ulster final when it was there for them, I’d say they have a lot of regrets because of the way they played in the last five minutes of normal time.

“Donegal today I felt with 25 minutes to go they more or less downed tools and not only did they down tools but they’d run out of ideas completely.”

Pat Spillane added: “They were six points down chasing a game and they’re sitting back, they’re not putting a hand in. It’s passive defending.”

The seven time Ulster Championship winner also is of the opinion that there has been a lot of pain in the Donegal camp after some tough years, and they have been on the decline for years.

McConville stated: “2018 is when they started (going downhill) for me, we can have a look at what went on before that and the hangover from winning the All-Ireland, and the change of personnel and all those young lads coming in.

“2018 they had the game at their mercy in Ballybofey in the super 8s against Tyrone, 19 against Mayo they kicked 16 wides, 20 was Cavan in the Ulster final.

“Last year was Tyrone and this year was Derry and Armagh and I do think they’ve been hurt a lot, they have a lot of scar tissue.”

Meanwhile, Armagh face Galway in the All-Ireland quarter final, with the winners facing Derry or Clare for the chance to reach the final.

Kerry face Mayo with the winners taking on Dublin or Cork in the other side of the draw.