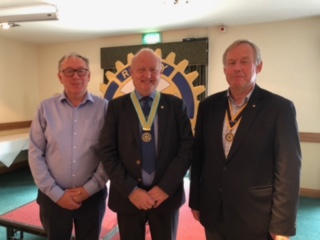 Peter Cutliffe will be taking over the Chain of Office for the next year at the Letterkenny Rotary Club.

Outgoing president Ed Wickes thanked his fellow Rotarians for their support during his term of office and congratulated everyone on what was a remarkable year, full of hardship and struggles but great joy too.

He also took the opportunity to hand over €2,145 to Robert O’Connor, Chairman of Relay for Life, in proceeds from the club’s successful participation in the 10th anniversary of the event and congratulated Team Captain Paddy Delap and thanked fellow Rotarians for their support over the last 10 years.

At the weekly lunch meeting for hand over was Assistant Governor Henry Robinson from Enniskillen who congratulated the Letterkenny Club on the amazing work that they do and wished them well for the year ahead. 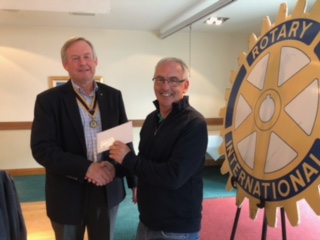 The club’s various fundraising activities (Christmas Tree of Remembrance, Winter Woollie Warmer etc.) were very well supported and the club thanked anyone who supported these ventures and helped in any way.

Peter Cutliffe outlined his plan for the year ahead, starting with a paper shredding facility on Friday the 24th of June at the Letterkenny Shopping Centre from 10.30am to 12pm. All funds raised will continue to support the work of Donegal Down Syndrome Association, in collaboration with United Shredding Carndonagh.

The club will also be out in force next week as they will be looking after the New Business Link Road, litter picking in support of Letterkenny Tidy Towns.

The Rotary Club meets weekly at 1pm in the Station House Hotel, with an evening 6pm meeting on the first Tuesday of each month and regular guest speakers and everyone is welcome to join.