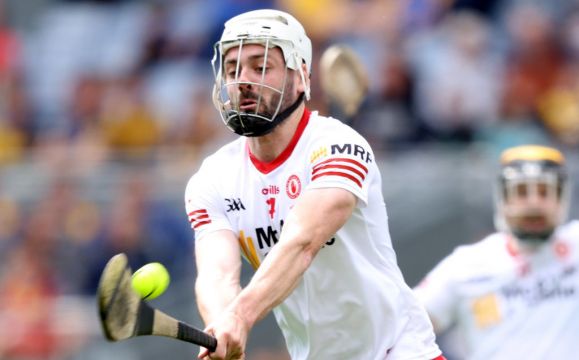 The well-known star, one of his county’s greatest hurlers, passed away yesterday.

He had been in Spain where he was a groomsman at a friend’s wedding.

The wedding has been cancelled as a mark of respect.

Tyrone GAA released a statement on their website late last night expressing shock at the sudden passing of the 29 year old.

It read “Heartbreak and grief can come in many forms but are especially cruel when brought about by the sudden death of someone young, talented, outgoing and in the prime of life.

“Accordingly, Gaelic Tyrone is totally shaken by the news of the tragic death of Damian Casey, a supreme hurler just now at the peak of his powers.”

“This breaking news is beyond belief,” a shocked Tyrone County Chair Michael Kerr commented. ‘Someone who brought honour, delight and simple, straightforward gladness to our whole sounty, and far beyond, is gone and it’s so hard to take in.’

“There are very difficult days ahead for Sean, Susan, Louise and Catherine, for Damian’s wider family circle and many friends and associates, for his team-mates and for the Gaels of Dungannon and Tyrone.

“Our deepest sympathy goes to them, and our focus must now be on providing the support and comfort that will be so badly needed.

“Damian Casey was a special gift to Tyrone and to hurling. We were the richer for his presence and are the poorer for his passing.

“D’imigh tú i mbláth na hóige, ar Sholas na bhFlaitheas go raibh d’anam | You departed in the bloom of youth, may your soul be granted the Light of Heaven.”

The game was his 40th senior appearance for the county. Casey had the remarkable record of scoring in every championship game, amassing an aggregate 414 points.